When Heresay is Heresy: The Cultural Politics of "Claiming", "Accusing" and "Making Allegations" that someone is... (you've got one guess)... HETEROSEXUAL? NOPE: Gay

[image is from here]
The above "cover story" isn't about whether or not Jonathan Knight of New Kids on the Block--remember them??--had an affair. The issue is whether or not he's gay. It's not about the details of a relationship gone wrong, but of an orientation that just isn't right.
When you're gay (think every presumed-het white male celebrity ever to be outed), the story is "OMG: he's gay!" When you're a white heterosexual dude (think, for example, the recently deceased David Carradine), the story is "he was into some kinky [not gay] sex!"
Let's call it an on-going annoyance, or thorn in the side of my wish to be seen as human like the über-dominant folks. There are several thorns, actually--I am "A JEW" after all, and "GAY" and "DISABLED" and "WAS SEXUALLY ASSAULTED". Sure, I could keep all that to myself, but why the fuck should I? The non-Jewish Christians, the non-gay straight guys, the non-disabled folks, and the unraped don't keep their oh-so-prestigious pasts and presents a secret! And let's keep in mind, my white, male, class-privileged, very literate (erm, well, in one language anyway) humanity isn't being pricked over nearly as much as most folks in the world, so let's put that out there at the start.

At issue is the proclivity or tendency of daily media and whatever small world there is beyond media, to do the media not-so-hushed version of the shame-laden whisper about "someone being lesbian or gay". It is stated in a tone that someone might say about a teen girl "did you hear she's PREGNANT, and has decided to have AN ABORTION?!?" or about a socially revered het husband, "Did you hear he had AN AFFAIR... WITH SIX WOMEN?!?"

In a word: scandalous. The news is scandalous. And "spectacle". Fraught and punctuated with intrigue, gossip, and "OMG: do you think it's actually TRUE?" wonderings and musings. With, apparently, stages of grief sometimes not far behind: NO, it CAN'T be!! Oh, God, please don't let it be so!! Well, there must be more to the story. How COULD THEY??!! Denial, bargaining, anger... you know the drill. With actual sudden deaths of loved ones, complex feelings and tumbling thoughts are, I'd say, to be expected. Death, when sudden, is usually a shock. But there's no death here, except, perhaps, of the fantasies of the superclass that all their darlings be heterosexual, please G-d, PLEASE! And they all never have an unwanted pregnancy, and they NEVER, EVER have an abortion. And they ought not have an affair, let alone six.

Meanwhile, back in the real world, get this: people ARE lesbian and gay, and some are even BI and some, a few at least--I've heard the stats but you know how STATS are--some are, well, you know, don't make me say it out loud: HETEROSEXUAL.

"Speculation" about 50 Cent being gay are not new. Nor are they substantiated exactly. In the sense, I suppose, that musings and gossip about him being heterosexual aren't substantiated. It's all heresay. But when the rumor is of him being gay it's also heresy. For an excellent documentary on this and related subjects, see Byron Hurt's excellent film, Beyond Beats and Rhymes.

I'm gonna ask you: at what time of day or year does the news treat someone who is assumed to be (or outed as) heterosexual as something that is controversial to speak about in general society? I can't begin to count the number of times I've excitedly shared with my straight friends (yeah, I have some), the news of so and so, whether celeb someone or local nobody, being LESBIAN or GAY, only to hear them wince--it's audible, trust me--and retort in dogmatic, indignant fashion: "It's really nobody's business if they are!" And I WISH it was nobody's business (figuratively and literally) that folks were het. But here we are, queer or not, in heterosexist Amerikkka.

Look, I wasn't born late this morning. I get what's controversial here. Black and Latina/o pop musical artists who are beloved across cultures, far more than white ones who are loved by people across sexualities, have pressure to appear or actually be heterosexual, in part due to the pressures of white het male supremacist society which makes all marginalised people more vulnerable to smear campaigns if they are even more marginalised. Ellen Degeneres had a lot to lose when coming out. Rosie O'Donnell did too. But Wanda Sykes had more to lose. Same with Angela Davis. Credibility and status in the eyes of dominant society is not easy to come by unless you're a white het male with some class privilege. For the rest of us, well, shit's gonna fly if "they" find out you're [fill in the blank]. For a far deeper analysis of this issue of the intersection of heterosexism and racism by Patricia Hill Collins, please refer back to a much earlier post, *here*.

But note HOW these stories are told, depending on the presumed audience. 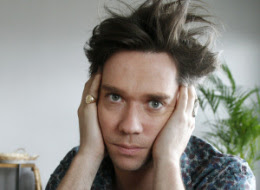 "I love, love 50 Cent," Wainwright tells Details. "I think he's just the sexiest, and a brilliant writer. And I know he's gay."


When asked to explain why he's so sure Fiddy is gay, Wainwright said, "That cute little voice of his. It's okay, 50 Cent. Feel free to call me anytime. My boyfriend and I are experts. You can come over for dinner. And maybe dessert."

50 Cent's rep did not return calls to the New York Post.

Get HuffPost Entertainment On Twitter, Facebook, and Google Buzz! Know something we don't? E-mail us at entertainment@huffingtonpost.com

[Pssst: Julian here. Can we please note how neither pic of Rufus shows him unclothed, and how the one shot of 50 Cent has to show off his torso. Sure, Rufus doesn't ever perform topless, but when the subject is "being gay" you'll often find the artist stripped down a bit, just to make sure we can objectify the people being discussed. This is done to straight women all the damned time in all male media: het and gay.]
April 14th, 2010www.blackgaygossip.com
Celebrities, Culture, Entertainment

Canadian singer Rufus Wainwright confessed his crush on rapper 50 Cent along with the allegation that he knows the rapper is gay. These statements were made by the singer in a recent interview with Details mag.
“I love, love 50 Cent. I think he’s just the sexiest, and a brilliant writer. And I know he’s gay,” Wainwright proclaimed. When asked by the mag how he’s so sure as to the rappers sexuality, Wainwright responded, “That cute little voice of his. It’s okay, 50 Cent. Feel free to call me anytime. My boyfriend and I are experts. You can come over for dinner. And maybe dessert.”

Well, we can’t say this is the first time we’ve heard such allegations pointed 50’s way. However, based on the rapper’s very vocal and homophobic position on gays, we don’t expect him to be busting out of any closets anytime soon. 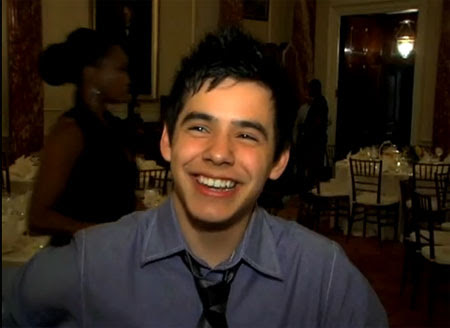 Former Idol contestant David Archuleta discusses Adam Lambert and musicians who come out of the closet:
"I don't think it was a big surprise. I don't think he was trying to be all secretive and sneaky about it...I just kind of assumed it. I think everyone else did too, but I don't think it's a bad thing or anything. He's a really cool guy. He seems really confident on stage but I don't think it comes across as cocky or anything...[For people like Adam Lambert and Clay Aiken, that's] up to them, [coming out is] their choice. As long as they're doing music, I think that's their main concern anyway. I know it's always interesting and surprising and shocking when they say those things, but I think that's up to them. It's their lives."


*          *           *
I have a soft spot in my heart for Archie. Also for Adam. But heterosexist CRAP among supposedly caring heterosexuals, especially Christian ones, that reinforces some idea, belief, moral valuation, or ethic of "being straight is better" is disgusting and oppressive. (OMG: did I just OUT David Archuleta as BOTH heterosexual AND Christian?!?!? I hope his career doesn't tank as a consequence!!!! And, no, I wasn't outing Adam as het and Christian!) I can't really say that's what's going on with young Archie; it's not clear in his statement what his values are, exactly, about someone being gay or lesbian. And, well, he's such a sweetie-pie, after all, and, well, he may come out one day, who knows? (I mean as definitively and proudly heterosexual. What did you think I meant?!)
Adam came out in a far more dignified way that did Clay Aiken. Clay was dragged out of the closet by a former sex partner who told EVERYTHING to one of the most vile humans in radio: Howard Stern. And yes, I listened to every "sordid" tidbit on a podcast of that show. Here's the thing: when a man has sex with a man, and you get the deets, the stigma is on the man celeb--he's got to respond publicly in some way that attempts to recapture some of that het status and dignity. When a man has sex with a woman, as in an affair, the woman is castigated as well as the man. In many cases she's seen as "the one who brought him down". Down. Off his perch of status and dignity, which, apparently, she never had.
You find out a lot about who is assumed to have dignity as a right of birth when you dig into media stories about people across race, religion, gender, and sexuality. Sure, the secular and atheist fundamentalists will castigate someone for coming out as Christian. Bob Dylan was critiqued. Of course, whether it's known widely or not, he is a JEW. For a time after the 1960s, and until the Immoral Minority led by Jerry Falwell took control of so much, one might have been nervous to be "out" as very religious. It wasn't cool in my public working to middle class high school to "devoutly believe in G-d", I can tell you that.
But being gay or lesbian. That wasn't ever broadcast unless you wanted to risk a beating or twelve, and being stigmatised and denigrated in countless ways.
I am less-than-fond of most white het weddings for this reason: the public, communal celebration of white heterosexual romantic love is kind of disgusting to me. Why can't those Caucasian hets just keep it to themselves and not FLAUNT IT and be so damned FLAMBOYANT about their private sexual business? Same with the White Capitalists and the White Christians (wait: is that redundant?)! Keep that shit to yourselves, people. No need to stink up the room for those of us who are trying to get through another day without being reminded that YOU have structural power over US.
Posted by Julian Real at 4:36 AM