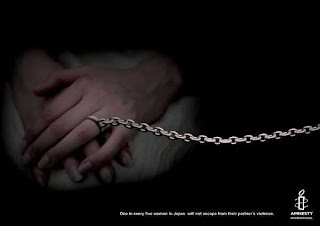 END OF POST.
Posted by Julian Real at 4:05 PM No comments: 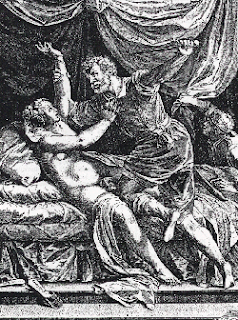 [image is from here, a site dedicated to bringing to light the problem of men's violence against women in heterosexual marriage and effective means to intervene on such violence. More about this in the next post]

What follows is from a UK white feminist's blog called Too Much To Say For Myself, that I'm now going to link to in the A.R.P. blogroll.

Rape is institutionally reinforced and protected as a practice inside and outside of marriage. The hypothesis of these sorts of arguments are that women, if married to men, are morally obligated to give them head and allow their man to fuck them whenever he feels "it's time". One can only wonder about the higher increase in incidents of marital rape due to drugs like "the little blue pill" and other erection-inducing pharmaceuticals.

Here's a thought: women never owe men sex, ever. Men do not have "the right" to obtain--by any means--sex with or from women. Such entitlements are fucked up and wrong. And any man who thinks women do "owe him sex" or that "I have a right to fuck my wife" is operating out of a rapist mentality founded on old patriarchal laws, some of which are still in effect, which try and render women as the carnal chattel property of men, by State Law and Religious Law. To all men who think you are so entitled: go fuck yourselves.

According to “sex therapist” Tracey Cox, the minute a woman gets that ring on her finger her rights to bodily autonomy go flying out the window.

In her response to a woman who asks:

“Do you believe you should have sex with your husband just because they want to? I’m going through a period where I’ve just gone off sex.

It’s only been six months and I’m sure I’ll come out of it soon but I resent my husband hassling me. I don’t think it’s right to have sex unless I really feel like it.”

“I totally disagree with you – and so do a fair majority of reputable sex therapists. Two people will never have the same desire or timing, even if their sex drives are reasonably matched. But when you said ‘I do’ you said ‘I do’ to sex as well. Sex is part of the bargain if you expect your partner to remain married to you and faithful to you.

Six months is a long time without sex without a good reason not to do it. Your husband has a right to expect regular sex and ‘duty shags’, I’m afraid, are all part of the ‘working at the relationship’ that experts rattle on about.”

“In Britain, America and Australia until the last decade of the twentieth century, a married woman was legally assumed to have consented to each and every act of vaginal intercourse with her husband. As in ‘Gone with the Wind‘, a husband who forced his wife to have sex was not considered to have ‘raped’ her – even if considerable violence was used. By definition a husband could not rape his wife.

This ‘marital rape exemption’ was commonly attributed to a ruling by Sir Matthew Hale in 1736. According to Hale, a wife gave lifelong consent to sexual intercourse with her husband. Under marriage vows husband and wife became ‘one person under the law’. It was a contract that ’she cannot retract’. Thereafter, as A Treatise on the Law of Domestic Relations (1870) put it, ‘wilfully declining matrimonial intimacy and companionship’ was nothing short of a ‘breach of duty, tending to subvert the true ends of marriage’.

From Joanna Bourke’s: Rape. A History from 1860 to the Present. Chapter 11: The Home

Perhaps Tracey Cox is unaware that the marital rape exemption was done away with in this country in 1992, and that to assert “I do” when reciting the marriage vows no longer equates in law to signing a contract that says “I hereby grant my husband lifelong access to and total control over my vagina”

“In the cool judgement of right-thinking women, compulsory sexual intercourse is not a husband’s right in marriage, for such a ‘right’ gives the lie to any concept of equality and human dignity. Consent is better arrived at by husband and wife afresh each time, for if women are to be what we believe we are – equal partners – then intercourse must be construed as an act of mutual desire and not as a wifely ‘duty,’ enforced by the permissible threat of bodily harm or of economic sanctions”

Susan Brownmiller: Against our Will. Men, Women and Rape. Chapter 12: Women Fight Back

“The will of the married woman who learns to accept routinized rape is no longer ruled by or even connected to her desires. Eventually, her desires are no longer a product of what she enjoys or what she has learned to enjoy. What the victim of routinized rape within marriage does, sexually, is a product not of what the victim wills but of what her attacker demands. As an immediate consequence, her will becomes a function not of her desires but of his desires. Eventually her desires become a function not of her pleasures, but of his pleasures; she wants literally to please him rather than herself because to please herself is too dangerous. The victim of marital rape gains survival, but she sacrifices self-sovereignty. In other words, she sacrifices the ability to control her own will and to determine her own actions, pleasures, and desires, free from external influence. In short, she sacrifices selfhood.”

Robin West: Equality Theory, Marital Rape, and the Promise of the Fourteenth Amendment. (Quoted in Sex Equality: Rape Law by Catharine A. MacKinnon)

Now unlike Tracey Cox I make no pretence to being a “sex therapist”, but for what it’s worth my response to the original letter writer would be:

“If your husband is hassling you for sex when you’ve made it quite clear that you don’t want it, he obviously has no respect whatsoever for your feelings. He does not have a right to expect sex from you, and no right to demand it of you against your own wishes and desires. And if he’s unable to wait until you’re ready for it, or to respect your rights as an individual to have sex on your own terms, then I’d question his suitability to be your life partner. Seriously, you deserve better than this”

Hat-tip to Jennie Rigg for spotting this nonsense.