Yoko Ono's Mayors of the World For Peace Speech

All that follows is from here @ ImaginePeace.com. 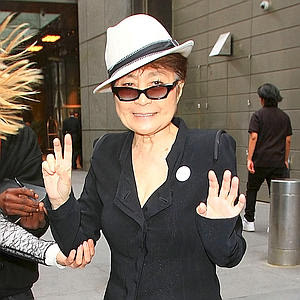 from New York Post
Yoko Ono and Michael Douglas joined the mayors of Nagasaki and Hiroshima at the Upper East Side apartment of John and Margo Catsimatidis the other evening to help Mayors for Peace, the international group dedicated to the abolition of nuclear weapons. The reception included mayors from Britain, France, New Zealand, Israel, Croatia and Spain.

POWER TO THE PEOPLE

We are gathering here this evening with one concern all of us have. What can we do to stop Hiroshima and Nagasaki from being repeated again to destroy the lives on this planet? This time, it will not be two cities. It will be the world.

It seems the choices we have are either to blow up the planet with all its lives, or stay alive maimed, and slowly die from cancer or other unpronounceable ailments we don't have the cure for yet. Of course, there is another choice. A good one, the one we are all hoping for. But it's up to us to do something about it. There is no big powers we can count on.

The governments of the world owe their very existence to the backing of powerful corporations, so, sadly, their initial allegiance will have to be to the corporations, not to the people.

Remember Mad Cow disease? It was covered up for ten years in the United Kingdom, while people were dying from it and not knowing why. At the midst of it, a minister demonstrated on TV to show how it was safe for him and his son to eat beef. This was made as a strong gesture of assurance to the people! People were in a shock, watching that program on TV, still not wanting to believe that a minister of a powerful position may have to comply to the wishes of corporations even at the risk of endangering people's lives - and in this case, his son's. Yes. All of us are good at burying our heads in the sand.

Fitzgerald spoke of being the son of a working class Navy man, and has realized how millions of Americans depended on the permanent war economy for their livelihoods - not limited to people in the military, but people who worked as defense contractors and their employees. "A person cannot be elected to be the President of the country, unless they are supported and voted by the military and defense Industries," he says. Therefore, "if the President does not take the nation to war, he will not be able to stay President." The article refers to the fact that Lyndon Johnson said, privately, he feared impeachment if he pulled out of Vietnam. Well, that's a hell of a statement. If some people immediately wished to bury their heads in the sand again, I understood why.

Most recently, last week, to be exact, the State of Arizona shocked the world by announcing a new law, which seemed predictablly, to point to a very grave future of this country, and for the people who are still holding on to the American dream. The American dream once was a dream for all world citizens. And this announcement from Arizona confirmed the worst to us. John Cory immediately hit back with a strong article called "STORY IN SIX WORDS." He mentioned that there was a legend that a colleague once bet Hemingway he could not write a story in ten words or less. Hemingway used six: "For sale. Baby shoes. Never used." John Cory wrote his own six words at the end of his article: "For sale - By owner - American Dream."

But, when it was at the darkest, something incredible happened. Our dream was not over yet! It took such a sad situation for people of America to stand up. But we did.

An ocean of people protested Arizona's new law on May Day in every American city right after the law was announced. One light, a big one, was lit in the world of darkness. Now we know where we are going - towards the light, together. No more burying our heads in the sand!

In such a historical moment, it is very important that the tragedy of Hiroshima and Nagasaki be brought up again as a reminder of what can happen to the world if we forget, and fall back to the world of darkness.

Mayors of the World, Thank you for being here in this room, at this very historical moment in America, to encourage and inspire all of us - that we can do it! What the big power of the government can't do, we can. We of this planet are still in our embryonic stage. But with your efforts and the strong wishes of the people of the world, I know we can and we will create a peaceful world for ourselves and for this planet.

One day, not too far in the future, we will see ourselves living peacefully and having fun together on this planet without War. Let's look forward to that day and start working intelligently, to make it happen. Clearly, if the whole world stood up and spoke out for World Peace, we'll get it.

Please pass my message to the people of your towns and the cities - I say to them that we can do it. We can do it together. With your help, with the help of the mayors of the world, our voice will be made still stronger. We are the Family of Peace.
Ladies and Gentlemen, Thank you again, for your wisdom and courage to speak out as the Mayors of the World. You are opening the door to many professional people who will learn from your stand.

Let's all stay well till we achieve World Peace.

Close The Loophole.
Ensure Background Checks for all sales at Gun Shows.