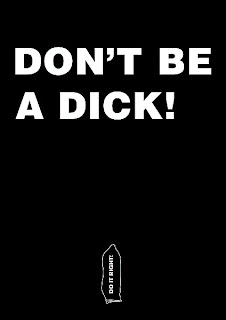 [this image is unrelated to the zine linked to below, and was found here]

Below is a link to a PDF document, a few pages long, as many zines are. It is made with typed material and cut-outs of various images, including those of male genitalia (drawings, not photographs), for those who may be triggered by such imagery. I would imagine, given that most or all of the images of people are of white people, that Paul Brown is white.

This is what introduces it at the website where I found it:

Don’t Be A Dick is a zine written (mostly) for men about the connections between the construct of masculinity, rape culture, and mainstream pornography. It combines (hopefully accessible) theory and personal experiences to address sexual assault in personal relationships. The zine also includes a section on radical consent.

Here's his zine, which can also be found here at www.xyonline.net.
END OF POST.
Posted by Julian Real at 4:55 AM No comments:

More of My Struggle with Transgenderism and Feminism 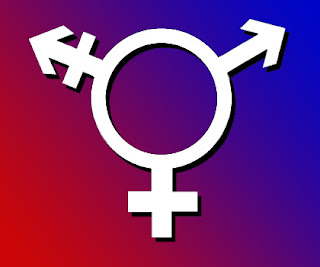 I am reminded of the battles in feminism over racism within the Women's Movement. I am reminded of the struggle of lesbian feminists to be visible in "Gay Community". And I am reminded that white heterosexual men routinely get away with murder. I have three initial points to make and I'll try not to delay making them.

1. Oppressed people, in my experience, look to one another for kinship, for community, for support, and for understanding, and when that doesn't happen it is deeply painful. I believe this is so because those of us who are part of oppressed groups have largely given up hope that the oppressor, whether that be men, whites, or heterosexuals, or non-trans people will "get it" enough to be a friend, an ally, and, better yet, a warrior fighting on our behalf.

2. The most structurally dominant people, and the systems they maintain from the top, are not in danger of being challenged into becoming humane as long as most of the energy activists in oppressed groups spend is spent fighting one another.

3. That said, the misogyny, racism, homophobia, and transphobia inside and outside groups fighting white supremacy, male supremacy, imperialism, globalisation, and the captivity and mass slaughter of non-human animals, must be challenged until the ciswoman-hating, white supremacist assumptions, harassment of queer people, and marginalisation of trans people is no more. For me, it ought not be otherwise. We cannot allow anti-ciswoman/anti-lesbian/anti-gay/anti-trans sentiments and behavior to flourish in any movement for social justice.

Due to valuing integrity, to a belief in the importance of accountability, and a spiritual priority placed on ending exploitation and harm, and also due to point one above, standards placed on activists for social justice are, in my experience, far more stringent than those placed on people in general; and standards placed on feminists are among the most stringent, I believe because they are women. And women are expected, in a male supremacist system, to accommodate everyone and everything. So where men fuck up all the time, women of all colors are held to account. Where whites fuck up all the time, women of color are held to account.

Men, trans or not, masculinist or not, maintain our male privileges and politically more empowered position with alarming regularity and willful ignorance of what we are doing. The same with white folks and our white privileges. I don't see much of a difference between the denial and defensiveness men are in about our social dominance over women, and the denial and defensiveness white people are in about our dominance over women of color. This includes white men, men of color, and white women.

That is why I centralise my understandings of oppression around the experiences and analyses of feminists of color. Relative to white women, white men, and men of color, feminists of color, collectively, see the white supremacist assumptions and actions of white men and white women, and the male supremacist assumptions and actions among white men and men of color, more clearly than any other group of people.

This impression I have reflects what Supreme Court Justice Sonia Sotomayor said about a wise Latina being more aware of what's going on than a [willfully ignorant] white man whose very position means he cannot see very much of how white men harm others, except through the lens of what he is willing to let himself know about what he alone does. And even then, when he sees himself doing harm, he sees it as being caused by depression, alcohol abuse, women having too much power, anything and everything other than the most obvious: that he is socially placed in a position of dominance, and can act on that whenever he chooses.

My own brother, for example, a Christian white heterosexual guy, is never, ever called out on his misogyny as such. (Unless it's one of those two times a year I have any contact with him.) Nor is he challenged to understand and uproot his homophobia. No one even brings to him the matter of his transphobia, so he may actually think there is no problem there, in him.

It is also important to the powerful groups who are most in control of institutions and systems and industries that problems be seen as primarily psychological, interpersonal, not structural or systemic.

There has been some tension in me and in my own queer community and beyond it, between and among trans activists and radical feminist activists. Usually two or three scenarios are revisited to point out the harm done to one or both sides. And harm was done. The issue, usually, is what could have been done differently to produce less harm, more safety, more security, greater accountability, and more responsibility among the people who most need resources and power to effect radical change in society.

In this context, there is a discussion happening, which I was going to link to until I remembered what I consider to be a serious political misjudgment Stan Goff once made on his blog Feral Scholar. He posted a conversation that took place within queer community into an environment where there were mostly white heterosexual men. I do not believe a conversation that happens among women, for example, ought to be relocated to a place viewed and commented on by men, without the expressed permission of all of the women involved.

That conversation focuses primarily on several points of tension between apparently anti-radical feminist trans people and apparently transphobic radical feminist ciswomen. In the discussion that I've been participating in, I felt obliged to speak up due to the fact that I perceived a trans activist to be making a blanket statement that all radical feminist ciswomen are transphobic or otherwise anti-transgender. In particular, Andrea Dworkin was named as someone who believed that the experiences of transwomen were not as important as the experiences of non-trans women. A few people came forward to respectfully debate that point.

When engaging in any discussion I must remind myself of two things:
1. I am a white man and that impacts any discussion I enter.
2. I am an active supporter of many radical feminisms. I am also an ardent defender of some radical feminists, all of them ciswomen. But I'd better be responsible about how and when I enter conversations with people I structurally oppress, such as transpeople and ciswomen.

For me, the tension which was unformed in me is this:
To what extent does a social justice movement that seeks, in the context of male supremacy, to highlight gender as a problem of narrowness of options and bigotry against any person who doesn't neatly fit the categories "man" and "woman" reinforce the invisibilisation of gender as a hierarchy, as a system of sexual dominance, as a practice of degrading those called women, while privileging those called men?

Does active support of trans agendas--as I woefully and generally misunderstand them, require me to betray or pause my commitment to highlight and challenge gender as a misogynistic hierarchy?

What I know, thus far, is this:
My commitment is with ciswomen and transwomen in their various battles against white cismen's systems and institutions, practices and values, which negatively impact all women (trans, intersex, or neither) as a class of beings alleged to be naturally subordinate to, and inevitably vulnerable to cismen and those who defend and protect cismen's abuses of power and structural position atop that hierarchy.

I won't actively support people to be racist, antifeminist, transphobic, or otherwise misogynistic. And my focus usually but not exclusively is on racist misogyny and its impact on ciswomen, white and of color.

I will maintain a focus on understanding and critiquing gender in such a way that gender-as-hierarchy remains especially observable. I will do work that, hopefully, renders rapists an endangered species. (To those inclined to think I said something biologically essentialist: I believe men, masculinists, and patriarchs are humans born of culture and society, not of placentas and DNA.) To the extent that they (cismen) behave as misogynistis, I will call them out. To the extent that they are silent in the face of the rape atrocity, and so many other atrocities disproportionately impacting women, I will call that out. And to the extent that systems and structures of misogynistic harm, of racist harm, are made invisible, I will seek to make them visible and targetable for radical actions which seek a rapid end to white male supremacy in all its manifestations.
Posted by Julian Real at 1:56 AM 3 comments: