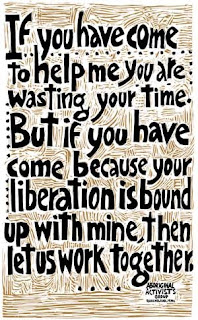 Several months ago I was sitting at a restaurant table eating lunch with two white liberal friends. The topic of discussion, after going over what good movies we've seen, and family member's health issues, became the problems I was dealing with in the profeminist communities or networks of which I am, for better or worse, a part. I described in some detail how someone's lack of accountability had taken a lot of time and energy from a particular group, and the two liberal friends remarked at how silly it all seemed; how radicals seem to get so hung up on every little thing--what terms one uses, how one acts in a single moment, etc.

I noted, probably not too effectively, that this is a liberal misperception, in my view, of what was going down. It also reveals a great deal about the values that come with white masculinist liberalism, which, depending on class position, often determine the the degree to which "rocking the boat" or "being confrontational" is seen as something good to do. I noted that among my radical activist friends, most of whom are feminist and profeminist, that "accountability" is a core value, out of necessity and out of love for responsible community.

Whatever strands of dominant politics one comes from or finds oneself in, by choice or default, "accountability" it seems to me, is practically an allergen to the way most political groups operate. Going with the flow, accepting a "free marketplace", and assuming what too many white masculinist liberal and conservative people assume about sexuality, gender, race, and class, among other social-political realities, are, in my experience, central values, eclipsing the possibility or probability of creating and supporting systems of accountability. When someone in a radical, politically activist group shuns accountability, this becomes a serious matter, not one that is best dealt with by sweeping things under the rug, or ignoring the white elephant in the room. "Enabling" the status quo to maintain supremacy is a core value of white male supremacist conservative to liberal societies.

One of the better descriptors of white male supremacist (WMS) liberalism I've heard is that "it makes promises it has no intentions of keeping". So poverty and racism are spoken of as social wrongs, but altering fundamental systems and structures, laws, customs, and practices which maintain each are never on the table to be discussed, let alone effectively dismantled or transformed. By comparison, WMS conservatism tries to keep its promises to maintain white male supremacy in as many forms and guises as possible, often unabashedly and without apology.

"Calling one another out" on matters that impact the community in oppressive or harmful ways is crucial to a healthy radical movement or community. Being open and willing to being held to account is also crucial. Too often, in radical circles, the parting of company, the rending of political networks happens because someone has decided they are above such things: they ought not be held to account, nor called out on something they are doing that is oppressive and otherwise harmful to individuals and the movement as a whole.

Once upon a time, it appeared at least that the proponents and agents of WMS liberalism and WS or MS radicalism, as fosterers and maintainers of these ideologies, while fundamentally different in values and goals, could work together to achieve what was termed "progressive" goals. What also has become grotesquely clear is that proponents of each, whether coming from the liberal traditions generated in Europe and the U.S., or radical traditions such as marxism, particularly those whose activists operated within a white male supremacist worldview, had little to offer Indigenist activists and communities, and in fact were and remain part of the problem rather than the solution. This is so to the extent that Indigenist concerns, people, and values are excluded from the conversation about strategy and approach to dealing with matters of oppression, including women's liberation and putting an end to genocide.

With the on-going effort of inclusion of Indigenist views and values, the term "progressive", as well as "radical" comes into focus through lenses other than those of the dominant society. Progressivism can be seen as a step away from what once was, before the era of Christian domination, mission work, and genocide. As Winona LaDuke points out in "Talking About A Revolution", what Bush as president (pick either Bush) did was, in many ways, "radical" if understood from an Indigenist traditionalist perspective. And many Indigenist values and acts can rightly be termed "conservative".

Centralising the experiences of women of color in feminism means, for me, as a radical profeminist, always being mindful of what a "radical" is and does, of what my values are, of how they support processes and goals for achieving various forms of liberation, and how best to live those values while challenging WMS liberal and WMS conservative systems and structures of oppression, including how such systems play out in the interpersonal realm. It also means challenging progressive and radical streams of social movement.

What I'm about to lay out is a sketch, one that is necessarily incomplete, as any analytic sketch is, and, indeed, as any theory is.

My experience of the adherents and activists of WMS liberalism, and one of the key dangers, is their lack of self-awareness about what their liberalism is, and what its values do when enacted in the world, across the globe. WMS conservatism's proponents and activists seem somewhat more aware of the fact that they are operating out of an ideology, one with a history and purpose. This doesn't make them less dangerous, as their social program is distinctly and primarily gynocidal, genocidal, and ecocidal. But WMS liberalism, too, is each of those things, whether liberals want to admit it or not. And many strands of radicalism, if white and male dominated, also don't constructively serve the struggle to end the oppression of women including Indigenous women, to end men's and male supremacist violence against all women, and to support women liberating themselves from systems of men's harm and exploitation, including on the interpersonal realm.

Most if not all white liberals I know do not even own that their worldview has a history, a set of values, and modes of being in the world that have detrimental affects on many oppressed people and non-human life worldwide.

The conflict I told my two white liberal friends about involved a white person behaving in a way that was effectively misogynistic, even while he claimed not only not to be sexist in any way, but to not be able to be misogynistic or sexist, because he was, after all, "anti-sexist" and "profeminist", radically so.

Such arguments, made to me when I've tried to hold to such an absurd line of reasoning, falls flat into the constructs of WMS liberalism, one tenet of which is that intentions matter more than effects, and that individuals can be "just individuals" and not also raced, gendered, classed beings. This is to say, that one strategy employable by anyone seeking to evade accountability is to claim that one's actions, somehow, are coming from a person who is not socially and politically located somewhere in the real world. It's as if location, and the entitlements, privileges, and ways of seeing and doing that come from living in such a position, disappear, even if temporarily.

As many oppressed people will tell me and anyone else with significant social privileges and entitlements, those attributes and permissions don't leave town, ever. They come with us, wherever we go, whatever we are doing, even when we are doing work which is reportedly anti-sexist or anti-racist.

One can do anti-racist work (defined by oneself as such) in racist, fundamentally white supremacist ways. So too can anti-sexists behave misogynistically, while doing anti-sexist work. That the radicals I know see this as an important thing to call out, only means that the namer values integrity of community with regard to its professed values. It doesn't mean radicals are particularly and distinctly argumentative or persnickety.

Calling someone out on something oppressive the offender has done is not, in and of itself, being either argumentative or persnickety. It is a simple act, usually done with trepidation, that holds to the values that make radicalism meaningfully different, in an anti-oppressive way, from liberalism and conservatism. Conservatism, especially, it seems, is steeped in a tradition of secret-keeping, of honoring certain codes of unethical behavior, such as thievery, gross dishonesty, mass exploitation, and overt violence against others. One need only listen to how various U.S. presidents speak of our wars against people of color around the world to see how much we value the evasion of truth-telling. This applies to both WMS liberal and conservative presidents, btw.

To be called out is to be called into account, to be challenged to be part of community, not a refugee from it. It's when the person with social privilege relative to the person calling someone out gets defensive or obstinant that problems generally ensue. Learning to welcome being called out is, for me as a white class-privileged man, a key component of being a radical. To not welcome it is to be status quo, and utterly disrespectful to the person naming my behavior. We need not have to agree, but I do have to listen, with an open mind, to what the namer has to say to me, without defensiveness and without being argumentative.

On a grander scale, radical movements for social change seek to name a lot, and to hold many people, and the systems they support, to account. If a company or corporation is destroying ecosystems and making the rape of women more possible than it already is, it is the radical's duty to address this directly, without mincing words. Hearing unminced words is also a responsibility, and for more on this please read Pearl Cleage's writing in the early chapters of Deals With the Devil and Other Reasons to Riot (Ballantine: 1993/reprinted in 1994), as well as several of the essays on this subject in Audre Lorde's book Sister Outsider (Crossing Press: 1984/reprinted with a foreword by Cheryl Clarke in 2007).

For an integration of radical feminist values and Indigenist values, I recommend reading the work of Andrea Smith. One of her books is Conquest: Sexual Violence and American Indian Genocide (South End Press: 2005), as well as this essay on how a pro-life vs. pro-choice debate of women's reproductive rights marginalises and invisibilises women of color.

When called out by someone who has way more knowledge (especially experiential) than you about matters of sexism, heterosexism, or racism, to name but three systems of oppression, move yourself into "a posture of listening" (Cleage), rather than a posture of defensiveness. Doing this means interpersonal and institutional challenge can generate growth and solidarity, and bring the process of radical social transformation that much closer to its goals of liberation from subordination and destruction for all people, non-human beings, and the Earth.
Posted by Julian Real at 1:07 PM No comments: