Before some assessment and analysis of this case, I'll begin with this snippet from NBCnews.com:


It was the epitome of white privilege, the narrative went — a student and star swimmer at prestigious Stanford University is arrested on rape-related charges, and after more than 16 months, he's sentenced to only six months.

And the authorities refuse to let the public see his arrest photo.

Until Monday. Here it is: 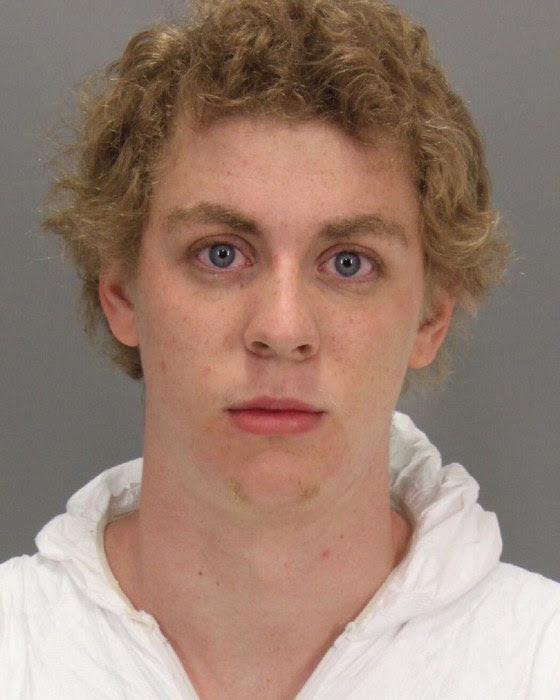 This is attributed to the Santa Clara Sheriff's office

Prior to that we got variations on this image:

This is attributed to Stanford University

One set of questions pertains to the assumptions behind the lack of release of the mug shot. Does wearing a blazer and tie mean someone is safe to be around? Does a hoodie and unkempt hair mean someone is more likely to rape? These are typically classist and racist media and cultural inferences.

If he were poorer and Black, he’d be called ‘a wild animal’ or ‘a vicious thug’ among other white supremacist coded language for ‘normal Black man’.


Thank goodness two Swedish male students intervened on her behalf, witnessing the rape. Thank goodness he was caught doing such vile violence to her. Here is the statement by one of them, Carl-Fredrik Arndt:
http://www.nbcnews.com/news/us-news/swedish-hero-recounts-nabbing-stanford-rapist-brock-turner-n587421

And another link to both their statements:
https://www.buzzfeed.com/emaoconnor/meet-the-two-swedish-men-who-caught-brock-turner?utm_term=.oinMKRrK3#.lp94EBZEb

Thank goodness he was caught doing such vile violence (vile-lence) to her. Sexual violence has a long raced, classed history in Amerikkka, against women white and Black, Brown, and Indigenous. From the rape of Indigenous women being slaughtered, to the battering and rape of slaves, to the forced sterilisation of Brown poor women.

What the predator can be thankful for is his race, class, and ethnic background. And his status as a male college student at an elite school and a star athlete to boot–in a predominantly white sport at that. And a few rape culture apologists and accomplices: judge, a father, and a friend who not only have been more than willing to ignore the woman behind the dumpster, but also toss her squarely under the bus.

“His life will never be the one that he dreamed about and worked so hard to achieve...” “That is a steep price to pay for 20 minutes of action out of his 20 plus years of life.”

“He will never be his happy go lucky self with that easy going personality and welcoming smile,” the letter says, noting that the former Olympic hopeful is now a registered sex offender.

No mention of being ashamed at what his son did ‘for 20 minutes’. No acknowledgement it was rape, even though there were witnesses. It morphs into a politically and morally neutral 'action'.

Let's replace "His" and "He" with "Her" and "She" and reread the statement.


Her life will never be the one that she dreamed about and worked so hard to achieve.

She will never be her happy go lucky self with that easy going personality and welcoming smile.

Judge Persky has acted on behalf of rapists before. Read about that here:
http://nymag.com/thecut/2016/06/brock-turner-judge-aaron-persky-controversial-history.html

Most importantly, here is the statement from the victim:
https://www.sccgov.org/sites/da/newsroom/newsreleases/Pages/NRA2016/Turner-Sentencing.aspx

As Andrea Dworkin once wrote, "the punishment for getting drunk and going in a frat boy's dorm room should be a hangover, not rape."

Or being outside. Or at home. Or being anywhere when inebriated. Or not inebriated. What patriarchal rape culture does so well is punish women for simply being.