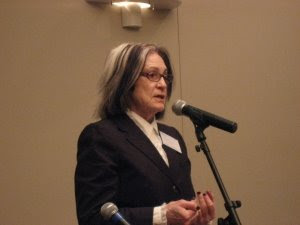 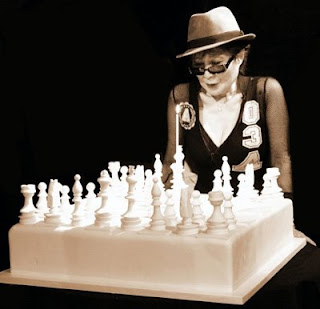 The image above is of Yoko Ono looking at a birthday cake presented to her last year by her son Sean, on the occasion of her 75th birthday.

The cake is designed to be a replica of a famous work of art, an all white chess set, ready to be played. It speaks to me of the insanity of war, of people killing each other and the Earth, thinking that, in the end, there will be "a winner". Once you begin to begin to "play" this sort of "game", you realise the enemy and "your side" are not discernible. Brava, Yoko, for a brilliant work of conceptual/visual political art.

Many more happy, healthy, creative birthdays to you, Yoko!
Posted by Julian Real at 3:09 PM No comments:

On The Compression of non-white U.S. History into Months: Is the Alternative Better?

I touched on this subject not too long ago, but wanted to repost and link to a more recent discussion happening over at Racialicious, also linked to in my blog roll, which for me says a lot that needs to be heard, and further discussed.

It is safe to desegregate history?
by Latoya Peterson

Every year, in February, I receive the same two things:

(2) The predictable “When is Black History Month going to be over?” emails, requests, and newspaper articles.

I think people who want to get rid of Black History Month are only slightly less annoying than people who complain about Kwanzaa. Yes, it’s true–Bob Johnson and Michael Jordan weren’t what Carter G. Woodson had in mind. But the true mark of a movement’s success is its descent into hackery. Black people don’t get to pick and chose what aspects of America we want to integrate into. We have to take it all. White people who complain that there is no “White History Month,” much in the way that one might complain that there is no “Black Rapper Show”, merit no real response, except that we all look forward to a day when there is one.

Me on the other hand, I tired of black history month, circa 7th grade. True, I did do a recital of Marcus Garvey’s “Look For Me In The Whirlwind” at the “Black Awareness Assembly” in 12th grade. But mostly when I think of Black History Month, I think of being made to watch footage of Negroes getting the shit kicked out of them, and then Negro teachers extolling the nobility of letting someone kick the shit out of you. You can imagine how well that went over in West Baltimore at the height of the Crack Age. And then there was, as one of my editors put it, the “I Am Somebody” bullshit, in which you were forced to memorize a litany of black achievement facts. The goal seemed to be to prove that my history took to rote for just as well as anybody’s. I too can be reduced into a list of facts, America.

Meh, indeed. I’m only moved to comment on Black History Month when some fool is adamant that we’ve outgrown the need for it, despite showing their ignorance in, say, a letter to the editor.

So, when Carmen dropped me an email with yet another article asking if its “Time to End Black History Month,” I admit, I just yawned. I can’t muster up the same righteous indignation year after year. It is what it is, and as someone who recalls being in multiple black history month school events (as Wilma Rudolph (twice), Ida B. Wells, singing Lift Ev’ry Voice and Sing more times than I can count, and reciting both “Mother to Son” and “A Dream Deferred” in my K-12 career) I can see both the arguments for maintaining black history month and quietly integrating it into the official curriculum.

Yet upon further reflection, I realized that I actually would oppose such a move. Why?

Because the way we teach history in America is guaranteed to leave people with the wrong ideas about a lot of crucial moments in our history.

The history that we currently teach is hopelessly sanitized to the point where people are still unsure exactly what happened at a lynching, and are unaware of the historical meaning behind leaving nooses as “a prank.” We learn about major people, events, and dates, but not so much the ideas behind the actions. This is why we learn Crispus Attacks was the first person to die in the American Revolution (though it was technically the Boston Massacre that sparked the war), and that he was black, but generally have no idea why he was out there in the first place, and if he was included in organizing activities or just an unlucky casualty.

Also, when history lessons focus on nonwhites, the results are fairly grim, at best. Black history month is often linked with the word “trivia,” but other months have the same struggle to create a lasting impression. Lisa Leong described what she learned about her people’s history:

Everything I learned about Asian Americans in my K-12 education can be summed up in one sentence: Chinese laborers built one half of the Transcontinental Railroad. I accepted that that was all there was. Here it was, my people’s greatest and sole contribution to the country: getting exploited.

I remember that the Chinese were good workers willing to risk their lives blowing up mountains to make way for train tracks. Some died from the dynamite blasts. They were well-behaved in contrast to the Irish workers who drank and gambled. Because of their diligence, the Chinese finished their half of the railroad before the Irish.

This is a pretty racist version of history to learn in the fourth grade. While the stereotyping of Irish people is obvious, the depiction of the Chinese laborers seems like a compliment. “Positive” stereotypes are deceptive like that. Good, diligent, and hard-working is the model minority stereotype about Asian Americans, which shades how elementary school kids learn Asian American history. Everyone who goes through the American education system gets the standardized version of U.S. history—from which Asian Americans are largely absent.

Native Americans don’t get a great shake either, being relegated to “helpers of the pilgrims” roles and the occasional exciting backdrop for “heroic settlers” to fight against. After learning about the founding of our country, the stories of American Indians fade away to the background, only vaguely remembered when “Columbus Day” pops up once a year.

They say that history is written by the victors, but this is ridiculous.

I recently started reading The Color of Wealth: The Story Behind the U.S. Racial Wealth Divide. I started reading this book to further my understanding of wealth, capitalism, and people of color. However, while slowly working my way through the chapters, I noticed that the format of the book was amazing in its simplicity.

The chapter overviews describe what was happening in the United States during the time period examined, and each summary provides a snapshot of what was happening with Native Americans, African-Americans, Asian-Americans, and Latin@s. While this tactic isn’t perfect, I think it comes much closer to exploring how historical events can impact different demographics positively or negatively.

Until history is seen as something to be analyzed and understood, rather than just memorized, I have little hope for anyone reaching an understanding of our nation’s past through the presentation of facts and timelines. Moreover, I don’t see how we can ever hope to fix how black history month is implemented until we fix how we talk about history.

But that’s just my opinion. What say you?

Posted by Julian Real at 2:52 PM No comments: