On International Women's Day: Listen To Women, and learn about women's condition globally


Please seek out I.W.D. information here. It is one page from the website for Women for Women.

Also, from this website: http://www.internationalwomensday.com/facts.asp you can find the following facts. Please click on this site's link above for more facts about the condition of women internationally.

Women own around only 1% of the world's land [And what percentage of that land is owned by Indigenous women, I wonder? --Julian]

530,000 women die in pregnancy or childbirth each year

Of 1.2 billion people living in poverty worldwide, 70% are women

80% of the world's 27 million refugees are women
END OF POST.
Posted by Julian Real at 3:15 PM No comments: 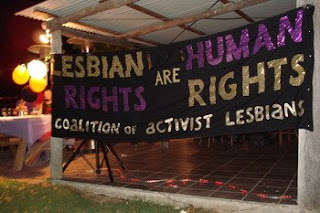 The image above is from this website, and is a banner made by and to promote the work of COAL: Coalition of Activist Lesbians. (I tried to link to COAL's website, but was unable to even get there.)


Linked to below is a post I think is important to read, for it sums up a variety of problems with the the parts of the Left that are white heterosexual male-dominated. One thing the "gay" rights and/or liberation movement has got to deal with, in my view, is not only the challenged homophobia and heterosexism on the Left, but the misogyny, lesbophobia, and sexism of referring to itself as "Gay" as if "Gay" means "Gay and Lesbian and Queer". It doesn't, in my radical profeminist mind anyway. Making the term "gay" inclusive of lesbianism, is no more progressive than using the term "Man" to define "humanity".

How about we call it "The Lesbian Movement" for a while, just so folks get used to thinking of womyn-as-universal? Or, how about "The Two Spirit Movement" so we can demarginalise, which is to also say centralise, a more Indigenist understanding of queerness? (And who the f*ck uses the term "homosexual" any more, among Leftist radicals??!!) I guess the answer is below.

RCP’s Anti-Homosexual Line: Why Held So Long and Stubbornly?

“I was told what apparently others were told - they were busy. Huh? Busy? Denouncing whole communities as hopeless bourgeois because you were busy? Revolutionaries prevented from joining the party; youth told to cease and desist on gay curiosity; having to live in fear that I’d be found and ridiculed because I couldn’t control the bourgeois gay monster inside me. But they were busy.”

Kasama is receiving posts from former RCP members describing the issues that brought things to a breaking point.

The question of why the party’s backward view of sexuality and gay people was so stubbornly upheld for so long emerged as an explosive controversy within the RCP during its 2001 program discussions.

This piece by Xbox mentions for the first time the “closet” that some gay and bisexual people lived in within the RCP — and discusses the RCP leadership’s claim that their bigoted view of gay people survived thirty years because they had been so busy with other matters — involving the U.S.-Soviet comflict war and the development of an international movement. Too busy all through the 1980s AIDS crisis? 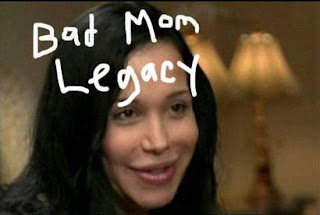 Above is one of the misogynous comments etched with venomous guile, like a scarlet letter, across a media image of Nadya Suleman. She is facing a particular form of contempt, a rage reserved for the woman who has the audacity to have many children without f*cking or living with a man. "Bad Mom Legacy" indeed! How dare she have children without having sex with "the father", or at least having the patriarchally correct decency to pretend to rely on "one man" for support?!

A follow-up on the post below:
One of the things I like about blogging, as opposed to publishing via a press or periodical, is that I retain the ability to adjust things, should adjustments be necessary, to clarify a thought or position. Such was the case with the last post, on Nadya Suleman.

But, not only did I revise the piece, I also then reposted it without the "Read more" link at the bottom, leading to, uhhh, the rest of the piece.

I can't guarantee there will be no more changes to that piece but I can assure you that as of right now, the whole piece is available to be read! (Below.)
END OF POST.
Posted by Julian Real at 1:06 PM 2 comments: