On Being "Too Feminine": One Gay Man's Perspective 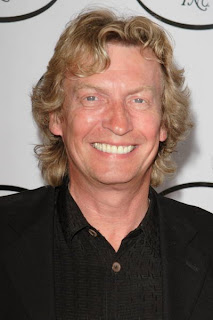 [above is a photograph of Nigel Lythgoe, one of the main judges on the TV show, "So You Think You Can Dance"]

It is clear that the judges over at So You Think You Can Dance aren't going to relent in their quest to make sure male dancers--and only male dancers--keep their level of "femininity" in check. Time and again, from city to city, across the U.S. the judges who determine who is and is not moving on in the show as contestants and competitors remind male dancers just how feminine or masculine they are, as if dance (or is it pronounced donce), couldn't possibly exist beautifully, brilliantly, or brazenly without mandated gender markers and codes of conduct.

I was called sissy and other misogynist/homophobic names when I was a wee one because I was not seen as "masculine enough" by my male peers in school. I learned quickly what was expected of me, and almost as quickly rejected my male peers' standards for what it meant to be a male child. (A note to any child: what with boys having cooties and all, it is wise to think at least twice before taking their advice about anything.)

It was beyond clear that the boys who teased and harassed me were terribly insecure about their own masculinity, whatever the fuck THAT is. I was part of enough different cultures to know that what that word, and the other word, femininity, meant had everything to do with the time and place and circumstances in which one lived, and that there was no precise agreement about what those terms meant; the definitions were paradoxically both overtly arbitrary while simultaneously accepted as defining normality. In places I grew up, on one hand being masculine meant being "smart". On the other it meant being "athletic". My only brother was both those things. Yet he too was made fun of occasionally, called things like "sissy" because he was skinny. (The irony of the song title "He Ain't Heavy, He's My Brother" did not escape me.) In the world of some of my male cousins, being masculine meant being not being too book-smart, and also showing a fetish-like interest in cars. Going to University as a theatre major was, therefore, both a masculinising and feminising activity, depending on which males you consulted.

For children, intersex, female, and male, "weakness" or "vulnerability" or "sensitivity" were seen as detrimental to your social standing and well-being. If a male child, especially, acted or appeared in ways that showed he was not interested in pillaging or maiming others immediately or in the very near future with or without buddies, he was setting himself up, as it were, to be identified and stigmatised as one of the most dreaded things of all: being feminine.

Being feminine meant, variously, being sweet, easily brought to tears, stupid, submissive, appearing to not have self-worth, appearing to care more about what others thought of you and your appearance than you thought of others and their appearance. It meant being in a position, socially and politically, to be judged, assessed, ostracised, humiliated, and/or tormented. It also meant being "the gender most likely to be raped", whether as a child or an adult. It meant being vulnerable, but not in a good way. It meant being (that is, existing) "for" boys in ways no one should exist for anyone, in my opinion. It meant one's heart and mind should be occupied with pleasing males of many ages, not with pleasing oneself and damn what males think.

In a well-organised patriarchal society, such mandates and codes of conduct are so thoroughly soaked into the culture that most children, by the time they are ten years old, know exactly what will and will not get them identified as "being like a girl". Girls who had social ambition and a desire not to be ridiculed and stigmatised as weak often sought to be "like boys" in some regards. I sought to be like girls in what seemed to me were important ways; in girls I saw the possibility of being humane, of being myself, of not being straight-jacketed, of having feelings (and thoughts) and also expressing them. I saw that many girls, relative to well-socialised boys, could and did do this along with also being smart, athletic, and prideful.

There were two options for children when I was young, and, from what I can see, things haven't changed all that much and in some ways have possibly gotten worse for kids. The two options were being girlish or boyish. Boyish girls were called, among other things, tomboys and dykes. Girlish boys were called many things, none of them implying "being a girl" was in the least bit status-worthy.

Low social status, being "too feminine", and being uncool went hand in hand... um, in hand. Being a girl, whether a boyish one, a girlish one, both, or neither, meant being a target for boys' wrath and ridicule. Being a boy who was seen as acting too much like a girl (and here we have to assume they didn't mean a young Venus Williams), meant taking on the stigma and inferior status of all girls. One couldn't be a girl and have the full status and privileges of boys. One could be a boy and achieve that status. Some girls tried, if they weren't already doomed with markers of "femininity" like having noticeable breasts and being termed "pretty", occasionally strove to gain that status reserved for boyish boys. In a white male supremacist society, being "pretty" if female, is like being dark-skinned if Black. It confirms your status as "other" and becomes a strike against you, in some regards. Being pale and being male is where it's at.

I mentioned Venus Williams not only because I appreciate her athleticism and tenacity on a tennis court, as well as her humor and general ways of being, but also because her very existence demonstrates how stupid the whole racist/misogynist/heterosexist system of "gender policing" is. If the Williams sisters' father had liked "his" girls to be dainty and coy, rather than determined and confident, what would have become of Venus and Serena? (And, for that matter, their less famous sisters?) We can thank their parents for allowing Venus and Serena to be the great athletes they are. They were lucky.

In most circumstances, the importance of being masculine if a boy, or feminine if a girl, cannot be understated in its significance to social standing. Body- and esteem-crushing abuse came down especially hard on those who did not behave as dominant society mandated. As has been noted here elsewhere on this blog, being gendered is not so much a willful performance as it is a survival or supremacy strategy in a racist, misogynist, heterosexist society. A society that is deeply ableist, classist, and ageist as well.

I'm currently watching the "cooler" show about dance, the one not called "Dancing With The Stars". For a variety of reasons, that show will never be cool. "So You Think You Can Dance" has an opportunity to be cool because it includes dance styles developed on the streets of urban neighborhoods. Poorer urban youth of color, and adults, have always had a great deal to bring to a society that scorns them, with little means of getting it out unless "discovered" by someone tied to white male systems of power. The same holds true for the cultural contributions of the rural poor, of whatever ethnicity. Once a statused white man says "Wow" then it becomes "cool" in dominant society. This key fact is left out of most accounts of why it is that aspects of African American male cultures become both popular and cool among white boys. It's the appropriation and exploitation of those cultural contributions by the racially privileged and empowered class that makes things cool, without white adoring eyes, African American cultural contributions may well have status among Black people, but so too do the contributions of whites, such as they are. (As has been discussed in many places, "white culture" is a bit of any oxymoron; whiteness takes meaning only when positioned over and against people of color; it takes status only when it controls and co-opts the cultures of the people whites oppress and destroy.)

Non-disabled middle class kids are one "standard" for what it means to be a child. So is lightness and whiteness. So is manliness. And each of these are not at all biological phenomenon, as that is popularly understood. Genes don't create societies in which boys with limp wrists are punched and killed by boys who make sure their arms have firm fists at the end of them.

On SYTYCD, there is a bit of a problem. "Dance" itself is seen as "feminine". "Femininity" isn't cool, apparently. How then do producers create a show to be cool that has primarily to do with being able to dance well ("well" being determined mostly by studio-trained dancers, most of them white). Stigma and status surround every performance on the show. Whether trying out to be one of the finalists, or competing in the last weeks before the season's finale, males and females have to demonstrate particular qualities that are not only steeped in discrimination and oppression, but in the dehumanisation of children across class, race, ability, sexuality, and gender.

This past week, once again, the viewing audience was reminded that males have to be masculine, and ought not be "too feminine". They were told this mostly by one white man, Nigel Lyhtgoe, but also by a white woman, Mary Murphy. Mentioning that Nigel is, in many ways, more feminine than Mary is akin to pointing out naked emperors aren't wearing clothes. And me saying that is not, and I do mean NOT, an insult to either of them. It is an observation made which may partly explain why they have to work so hard to be sure the male dancers on their program don't come across as (pardon the language) faggy and the women as dykey.

That, and the fact that their corporate sponsors are selling the world products designed to enforce the oppressive and dehumanising gender binary.
END OF POST.
Posted by Julian Real at 10:23 PM No comments: