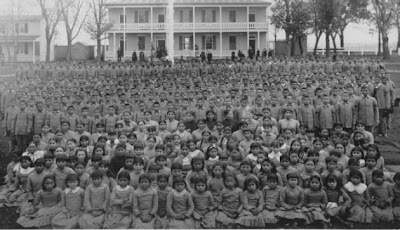 This is a very painful story told by Andrew Windy Boy (Chippewa/Cree) about being humiliated and culturally assaulted. The image above and the video interview below are both speak about the genocide that happened at Carlisle Indian Industrial School in North America. More information about the film this interview is from, follows the video.

The mass murder of human beings is just one method of committing genocide. Oppressors taking away a people's religion and their language are two other ways to achieve the same goal.


June 1 2008, Rich-Heape Films released its long awaited documentary titled "Our Spirits Don't Speak English: Indian Boarding School". On June 10, 2008, the government of Canada formally apologized to the World, in a solemn parliament session for its treatment of Indians in the last century. Prime Minister of Canada, Stephen Harper apologized for previous governments' policies of taking Indian children from their parents and homes and forcing them into residential Roman Catholic schools.


Now, in this [2008] documentary, learn why this formal apology had to be made.

Dallas — Street Date June 10, 2008 —Native American owned Rich-Heape Films announces the release of “Our Spirits Don’t Speak English: Indian Boarding School,” a documentary that examines an educational system that was designed to destroy Indian culture and tribal unity. When it began in 1879, the philosophy of the Indian boarding school system was “to kill the Indian and save the man,” the mission statement of Captain Richard Henry Pratt, founder and superintendent of Carlisle Indian Industrial School in Carlisle, Pennsylvania until 1904.

The battle against and the victory over the boarding school monster is told by educators, former and current students who were interviewed at Carlisle; Sherman Indian School, Riverside, Calif.; Sequoyah High School, Tahlequah, Okla.; Anchorage, Alaska; and other locations.

One of the most compelling is an interview with Andrew Windy Boy (Chippewa/Cree), from which the title is taken. Windy Boy, who attended boarding schools in the late 1960s and early 1970s, talks about the assault on his culture.

“[They] took me to the boarding school where I wasn’t allowed to talk my native tongue or practice my native ways.

“We met Andrew Windy Boy in 2002 while on the Summit Lake Paiute Reservation in northern Nevada. Andrew’s oral history of his boarding school experience was the inspiration for this film,” says Steven R. Heape, Cherokee Nation Citizen and executive producer of Rich-Heape Films. “Andrew’s story is not one you will find or hear in the public school system. He and other survivors of the boarding school system truly have my respect for what was endured just for being an Indian child. This is a story that must be told and not forgotten,” Heape said.

Gayle Ross, renowned Cherokee storyteller and Great Granddaughter of Chief John Ross, is host and narrator of the film.

Screenwriter of the film is Dan Agent (Cherokee/Choctaw), former editor of the Cherokee Phoenix from November 1999 through 2006, original story by Karl Tipre.


Please use this order form only if you want to purchase our DVD's for home use.

If you want to purchase our DVD's with "Public Performance Rights", please use this form.

END RAPE NOW! a message to men from one man

This was made by a white man in a Feminist Studies class. The focus of the video is sexual violence against women on college campuses, but not exclusively on campus. Please share this video with every man you know.
Posted by Julian Real at 7:03 PM No comments: 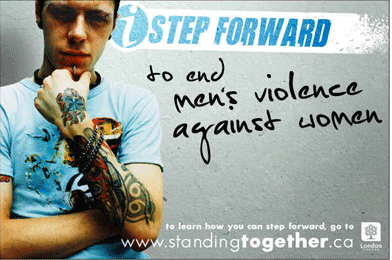 [image of poster is from here]

What follows was posted as a comment to the blog abyss2hope, linked to from this blog, but also here. Marcella's post links to a non-Indigenist Australian report on education's role in preventing sexual violence against women written by white feminism who misrepresents "second wave" feminism, but who offers many insights into what needs to change on an educational level to really stop the violence, not just attend to it as an on-going crisis.

My questions are these:
When will governments consistently and adequately fund Social Services and Community Resource groups that are designed not just to help those women harmed by men, but to stop men from doing the harming in the first place!? In some societies, if a man rapes a woman, he is removed from the community and killed. How long would rape continue if that was standard practice?


Just below is Jennifer's response to Marcella's post on this important topic. (I corrected one typo.)

If the writer had cared to read Catharine McKinnon's work and other radical feminists work, she would have realised her claims were totally untrue. Elizabeth Stanko and Liz Kelly have also written extensively about male violence against women and girls.

What second wave feminists sought to discover is how and why male violence committed against women and girls (and to a lesser extent boys) is widespread, common and mundane. Answering these questions meant radical feminists went to the root of the problem and that is and still is how dominant masculinity is constructed, promoted and maintained as natural.

Likewise radical feminists have looked at how power operates and which dominant group continues to retain this power and define to subordinate groups, primarily women and girls, what does and does not come within the term 'sexual, physical and or pyschological violence.'

But of course we are in the midst of a huge backlash and individualism and 'diversity' means if taken to its logical conclusion that men as a group are not the ones with greater social and economic power and women as a group are supposedly able to negotiate and limit any male's decision to commit sexual/physical/pyschological violence against them. Oh so simple, but as radical feminists discovered or rather re-discovered, patriarchy is not that simple.

Second wave feminists listened to women's and girls' experiences of male violence committed against them and then publicly named such violence for what it is - male control and subordination of all women and girls.

If we cannot name the perpetrators then we cannot even begin to engage in primary prevention work. Naming the perpetrators means challenging the social construction of masculinity and femininity both of which serve to enforce and maintain male power and control over women and girls.

Interlinking this is racism, misogyny, homophobia and classism, none of which can be separated out from how gender is and continues to be constructed as 'natural and unchanging.'

As the backlash commenced so new terms were developed in order to hide the fact violence is predominantly committed by males against females, but since this truth had to be kept hidden, phrases such as family violence, interpersonal violence and even gender-based violence were coined. All of which serve to hide which biological sex is disproportionately committing such acts. 'Family violence' implies several members within a family are committing violence against other members - again too simplistic because it ignores power dynamics and how one or two family members have greater economic and social power than other family members.

Posted by Julian Real at 7:00 PM No comments: