Thank you activists in Madrid, Spain: "The Revolution Will Be Feminist Or it Will Not Be!"

Maybe when the US grows up, it can have a Socialist-Feminist party too. All that follows is from *here* at aljazeera.net.

Demonstrators have camped in Madrid's central Puerta del Sol square and in cities around the country since the weekend, responding to calls on online social networks and by the Real Democracy protest organisation.

Some have vowed to stay until the regional and municipal elections on Sunday.

If police try to "remove us we will sit down, everything will be peaceful, and if we are eventually dispersed we will come back tomorrow." A spokesman for the organisers, Juan Rubio, said.
However, electoral authorities in the Madrid region denied an official request by organisers to hold a rally in the Puerta del Sol from 8:00 pm (1800 GMT) on Wednesday.

The request was not submitted with 24 hours' notice as required by law, and the demonstration "could affect the electoral campaign and the freedom of citizens with the right to vote," a spokeswoman for the election authority in the region said.

About 15 police vehicles took up positions in and around the square on Wednesday evening but police took no action and the police presence diminished later.

By midnight, most of the protesters were starting to disperse as rain fell.

Economic crisis
Spain's jobless rate hit 21.19 per cent in the first quarter of this year, the highest in the industrialised world. For the young, the situation is more desperate: 44.6 per cent unemployment for under-25s in February.

Carrying placards reading "Make the guilty pay for the crisis" and chanting "They call this democracy but it is not", the protesters hope to be heard in Sunday's elections.

Mostly peaceful, the protests began on May 15, lamenting Spain's economic crisis, politicians in general, and corruption.

"This is a movement that is under construction, we are still gathering ideas, organising gatherings for social change," said Rubio.

The protests seem to have caught political parties by surprise.

Prime Minister Jose Luis Rodriguez Zapatero's ruling Socialist Party was "alarmed" by the protesters, fearing them to be disaffected left-wing supporters who would abandon the party at the ballot box, the leading daily El Pais said.

Weekend polls forecast devastating losses for the Socialists as voters punish them for the government's handling of the economic crisis, including painful austerity measures.

Mariano Rajoy, leader of the conservative Popular Party, which stands to make huge gains in the elections, said he could understand the protesters' motives.

The youth unemployment rate was "terrible" and unacceptable in a country like Spain, he said.
Polls published in the centre-left El Pais and the conservative El Mundo predicted broad losses for the Socialists including in strongholds such as Barcelona, Seville and the Castilla-La Mancha region. The Socialist Party is "on the edge of a catastrophe," El Mundo predicted.

Harold Camping: Another 15 Minutes of Rapture 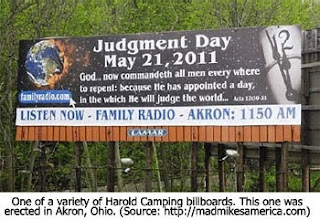 These white Christian fundamentalist evangelists are violent. Their heterosexism, sexism, racism, and moralistic CRAP is a form of social violence against many groups of people: women, people of color, the poor, Indigenous people, and LGBTIA (Lesbian, Gay, Bisexual, Transgender, Intergender, Intersex, Asexual) folks. That means their violence harms most of us. And, contrary to some of their beliefs, they aren't leaving some time today. They may well be packed and ready. But they're unfortunately not going anywhere.

One day, perhaps, these white racist, heterosexist, pro-patriarchal paliens will be taken from Earth leaving the non-human animals, non-Christian fundamentalist evangelists, air, plant life, sea, and land to live together in peace. This gay, intergender, profeminist Jew will pray this to happen sooner than later.

Some of what follows is from makezine.enoughenough.org/prop8


I Still Think Marriage is the Wrong Goal

A lot of stories are circulating right now claiming that Black and Latino voters are to blame for Prop 8 passing. Beneath this claim is an uninterrogated idea that people of color are "more homophobic" than white people. Such an idea equates gayness with whiteness and erases the lives of LGBT people of color. It also erases and marginalizes the enduring radical work of LGBT people of color organizing that has prioritized the most vulnerable members of our communities.

Current conversations about Prop 8 hide how the same-sex marriage battle has been part of a conservative gay politics that de-prioritizes people of color, poor people, trans people, women, immigrants, prisoners and people with disabilities. Why isn't Prop 8's passage framed as evidence of the mainstream gay agenda's failure to ally with people of color on issues that are central to racial and economic justice in the US?

Let's remember the politics of marriage itself. The simplistic formula that claims "you're either pro-marriage or against equality" makes us forget that all forms of marriage perpetuate gender, racial and economic inequality. It mistakenly assumes that support for marriage is the only good measure of support for LGBT communities. This political moment calls for anti-homophobic politics that centralize anti-racism and anti-poverty. Marriage is a coercive state structure that perpetuates racism and sexism through forced gender and family norms. Right wing pro-marriage rhetoric has targeted families of color and poor families, supported a violent welfare and child protection system, vilified single parents and women, and marginalized queer families of all kinds. Expanding marriage to include a narrow band of same-sex couples only strengthens that system of marginalization and supports the idea that the state should pick which types of families to reward and recognize and which to punish and endanger.

We still demand a queer political agenda that centralizes the experiences of prisoners, poor people, immigrants, trans people, and people with disabilities. We reject a gay agenda that pours millions of dollars into campaigns for access to oppressive institutions for a few that stand to benefit.

We are being told marriage is the way to solve gay people's problems with health care access, immigration, child custody, and symbolic equality. It does not solve these problems, and there are real campaigns and struggles that would and could approach these problems for everyone, not just for a privileged few. Let's take the energy and money being put into gay marriage and put it toward real change: opposing the War on Terror and all forms of endless war; supporting queer prisoners and building a movement to end imprisonment; organizing against police profiling and brutality in our communities; fighting attacks on welfare, public housing and Medicaid; fighting for universal health care that is trans and reproductive healthcare inclusive; fighting to tax wealth not workers; fighting for a world in which no one is illegal.

Now, check out this awesome comment from Dark Daughta, which will close this post because it's so awesome.

Dark Daughta said...
I think that as the different segments of various movements spend more time interacting with each other and reading each other there will be a kind of coalescing of political agendas. I will definitely appreciate lefty men developing a layered analysis that includes the people of colour and native people they oppress. I'd also appreciate the middle classes of various communities who do radical work to incorporate an analysis of status, hierarchy, class and career that points fingers back at them. I'd like people of colour who are immigrants like me to think and read and write more about the relationship between their immigration, their status as low level settler occupiers and the plight of native and inuit peoples. I'd like married radical political folk to think more regularly about queers and nonmonogamists. I'd like to have more conversations with people about the politics of aging both in and outside communities of resistance. I'd like to talk more about beauty, evil limited construct, with people inside communities of resistance who nonetheless set up artificial standards related to who is attractive and who is not. If I see one more bony jutting hipped white dyke or transman with limp jauntily cut kewl hair presented as the epitome of what it means to be politically radical, conscious and kewl, I'm gonna scream. Well...err...not scream, really. :) But it's just that every community, instead of obliterating oppressive standards and beliefs based in hierarchy seems really comfortable creating new ways to exclude and/or raise up a handful. It's frustrating.

Posted by Julian Real at 1:28 AM No comments:

Hmmmm. Saying "good-bye" would take on a whole new meaning.

Maybe we can finally get the homophobic slur, "That's so gay!" cleared from school hallways and playgrounds. Yeah, let's do what George is suggesting. Please buy your t-shirt or button in time for your city's Pride Celebration. And then we can watch anti-gay/anti-lesbian fascistic white Christian harassers try and ban the word "Takei".


I'll mention that I'm concerned the replacement phrase could get used in some very white places where sensitivity to racism regarding Japanese-American and Japanese people is low to non-existent. I think The Vapors really fucked up with their one-hit wonder, Turning Japanese. This whole campaign could "go there".

Lesbian news reporter and commentator Rachel Maddow, has declared this "the best new thing!" And she may be right. We'll see. Personally, I'm for replacing the word "gay" when used that way with the term "het".