McCain is a Genocidalist: A Vote for Him is a Vote for Racist-Misogynist Atrocity 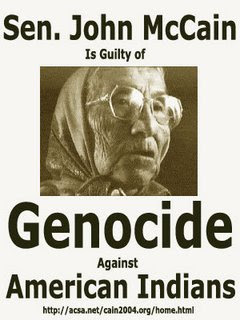 For more images and information please, go here. The information that follows is from that website.

÷ Is Guilty of Genocide ÷

ACSA study reveals that after assembling a team of "pro-Peabody Western Coal" Indians and obtaining a false "Hopi-Navajo" Tribal Counsel designation by the Bureau of Indian Affairs for these paid Tribal representatives, in the period 1974-1996, Senator McCain was able to get large bands of the Dineh-Navajo relocated off their lands, so that Peabody Western could mine the coal under their farms at nominal expense. Common Cause has suggested McCain was indirectly compensated by street name cash contributions to his Federal Election Fund during three Presidential runs, and through family business with Las Vegas Casinos who benefited from the coal driven power he supplied.
[Additional information and image added on Dec. 8, 2008)
END OF POST. THERE IS NO MORE
Posted by Julian Real at 12:36 PM No comments: