Catharine A. MacKinnon on "Lovelace", and the subject (not object) of the film, Linda Marchiano


All that follows is a cross-post from Harvard University Press Blog. 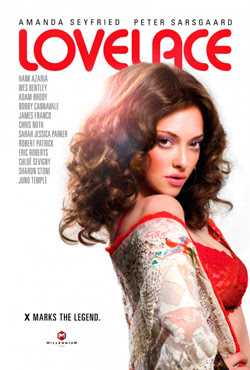 The pornographic film Deep Throat, released in 1972, was a cultural sensation whose star, “Linda Lovelace,” was said to put a girl-next-door face on the sexual revolution. But the actual life of Linda Boreman, as depicted in the new biopic Lovelace, was one of beatings, rape, and terror. Feminist legal scholar Catharine MacKinnon, author of such works as Toward a Feminist Theory of the State and Only Words, represented Boreman after she came forward with her story, and later, with Andrea Dworkin, pursued civil rights litigation as a means to fight pornography. We asked MacKinnon about Boreman, Lovelace, and the potential impact of the film.
-----
Q. You’ve noted that prior to the 1980 publication of Linda Lovelace’s Ordeal, you had no view of pornography one way or the other. For those unfamiliar with her story, who was Linda Lovelace?

Q. This film comes decades after the landmark pornography civil rights hearings at which Marchiano testified, as documented in In Harm’s Way. Can you remind us what was at stake in those hearings?

The anti-pornography civil rights hearings collected in In Harm’s Way created a space for people victimized by pornography to speak about what had been done to them in its making or through its use.  Up to that point, the legal argument over pornography had essentially only considered the freedom of speech issues.

The hearings documented the inequality that is foundational to the industry: that the “speech” of the pornographers is the use and abuse of the bodies of mainly women, who were far from free and were not speaking for themselves. The consequences of the distribution and use of the materials was shown to be equally silencing and endangering to legions of women and children who are abused by its consumers.  Thus the sexual exploitation of women and children in making pornography is mass-produced through its consumers to become violation of other women and children.

The civil rights ordinances the hearings debated were passed several times, then found to violate the First Amendment on the theory that the more harm the materials do, the more protected as speech they are–an incorrect, indeed reversed, view of First Amendment law. The ordinances could still be passed and found constitutional today.

Q. What was your involvement with the Lovelace film?

I represented Linda from 1980 until her death, was her friend, and continue to represent her Estate and her children. Lovelace is based in part on our life story rights. It shows Linda as human and credible, as she was not seen as being in life. All she ever wanted was to be believed and respected, to have people face what really happened and take steps to stop it. We see this film as a major step forward in that process. Apparently, when you make fact into fiction, people begin to believe it is true.

We participated in the making of the picture, are proud of it and the people who made it, and feel strongly that Linda would be proud of it.

Q. Gloria Steinem has said of the film that the true story is actually much more violent, but that the filmmakers “did the best they could.” To the extent that the trauma of Marchiano’s life had to be toned down to bring the film to a wide audience, why is that a compromise worth making?

The filmmakers had full creative control, which is as it should be. The film’s compromises with factual accuracy are not mine to defend. Artists operate on assumptions of what the experiences of audiences prepare them to see; sometimes audiences say they want to see pretty standard tropes when they go for entertainment.

Through a brilliant structure, Lovelace unmasks the myth that Linda was freely acting and shows her enduring coercion and terror, trapped by lack of support from her family and authorities. And it shows her victorious, getting free of what is increasingly understood as sex trafficking. It shows the core truth of her story and her triumph.

Q. The impact of the internet on the pornography industry has obviously been enormous, and this film depicts an era much different from that in which we now live. With that said, what would you hope that the Lovelace audience takes from the film?

Society is substantially more saturated with pornography than it was before, as Andrea Dworkin and I predicted in 1983 would happen if nothing was done to stop it. That means we need a law like the civil rights law we proposed even more now than we did then, because even more people are being violated as a result of the sex industry.

Linda had no rights over Deep Throat when it was made, and without the law we wrote for her and others, she would have no rights over it today. And she is not alone–far from it.
Once Linda is seen as a human being rather than a sex doll and sperm spittoon, a process Lovelace advances light years, we hope audiences will begin to consider that the pornography industry traffics in a form of sexual slavery that is neither protected speech nor free. Meantime, they will see an enlightening story as they enjoy a very smart, splendidly acted, and good movie.