In the Category of Not Practicing What You Preach: Republican Christian Married WHM Mark Souder's Affair with Female Aide with whom he made an Abstinance Video

[image of U.S. Republican House of Representatives member Mark Souder is from here]
This piece is from *here*.

Patricia Murphy
Columnist
Rep. Mark Souder (R-Ind.) resigned from Congress on Tuesday after revelations that he had an affair with a part-time staff member. Souder is married and has three grown children.

The eight-term congressman, who is a well-known Christian conservative, spoke at length in a statement issued Tuesday about the honor and privilege of serving in Congress, and repeatedly spoke of God and his family before finally saying, "I sinned."

"I sinned against God, my wife and my family by having a mutual relationship with a part-time member of my staff. In the poisonous environment of Washington, D.C., any personal failing is seized upon, often twisted, for political gain," Souder said. "I am resigning rather than to put my family through that painful, drawn-out process."
He also spoke cryptically about the challenges of holding public office. "I do not have any sort of 'normal' life -- for family, for friends, for church, for community," he said. "To serve has been a blessing and a responsibility given from God. I wish I could have been a better example."

At a press conference Tuesday announcing his resignation, Souder added a comment not in his prepared statement. In a video posted by Talking Points Memo, the congressman said, "My family were more than willing to stand here with me -- we are a committed family. But the error is mine and I should bear the responsibility. And, quite frankly, I'm sick of politicians who drag their spouses up in front of the cameras, rather than confronting the problem that they have caused."

Souder has been married to his wife, Diane, since 1974. They have three adult children and two grandchildren.

Mediate.com reports that Souder, a proponent of abstinence education, once taped an interview on the subject with the woman he had the affair with.

Souder represents Indiana's third congressional district. In resigning, effective Friday, he set off a scramble for his seat in Congress, which may be filled by a special election. He won the Republican nomination in the Indiana primary two weeks ago.

Souder was first elected to Congress in 1994. He focused on homeland security issues and also led the fight to give federal funding to faith-based organizations. He was named "a conservative true believer" by Congressional Quarterly magazine. He was also one of four House Republicans to vote against impeaching President Clinton during the Monica Lewinsky affair.
Filed Under: The Capitolist
Posted by Julian Real at 10:31 PM No comments: 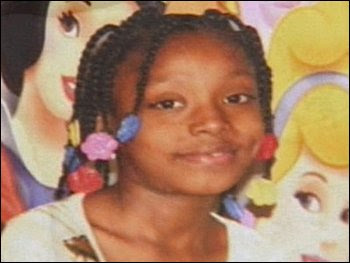 TV crew may have captured shooting of Mich. girl
Events leading up to the shooting death of a seven-year-old girl at the hands of a Detroit officer may have been videotaped by a crime-reality series camera crew that was with police as they searched a family home for a homicide suspect.

I remember when "the OJ case" broke, and white Amerikkka refused to believe--REFUSED TO BELIEVE--that white het male supremacist police forces across the country DO NOT serve the African American community. They assault and harass the African American community, with tremendous force, gun power, might, local and State protection. I was younger and, in some sense, whiter. There was no question in my mind that O.J. Simpson murdered two people: his wife, Nicole Brown Simpson and the man who, along with Nicole, fought to stop him, Ron Goldman. I also have no trouble at all believing any husband has the privacy and institutionalised, and sometimes religion-backed power to murder their wive, or rape her, or abuse her in any number of ways. I believe O.J. Simpson murdered two people, and was a man who abused a woman, to death. And I believe the LAPD and many other police departments across the U.R.A., are racist as hell, and Arizona is going to continue to prove it. So, tragically, does this case here, in which a police officer fired into the home of a girl, killing her.

I doubt, though, that in fifteen or twenty years, white Amerikkka will remember the name of Aiyana Jones. Maybe that's partly because there are too many names Black girls and women murdered men, including by WHM supremacist police forces across the U.R.A. But I hope we do remember her and don't let her death be "just one more casualty"--for there is nothing casual at all about killing a girl. Will white history books tell the story of this "noncombatant" child paying the price The White Man has placed and kept over the head of each and every person of color to be forced onto or off of this land? Will her name go down in history as the case that broke loose the grip of the bloody strangling hands of white people who, I fear, won't let go until every last person of color is either enslaved or dead. With regard to Arizona's newest racist policies, Jessica Yee asked on a feminist magazine website what constitutes a social justice or human rights issue being feminist. I'm not qualified to answer that question, but I can say this, to every profeminist man out there: the murder of Black girls by white male supremacist police officers counts as a profeminist issue. Genocide and gynocide are bound to each other in practices and policies supported by whites and men in "my" country. How, one might ask, is the murder by the police of Aiyana Jones NOT a profeminist issue? And in what reality are these police officers and the ones who supported the bombing of MOVE members, not terrorists endangering the lives of U.S. citizens? And why won't the U.S. government respond with force against "our" terrorists the way they do, increasingly indiscriminately, against Black, Brown, Indigenous, Asian, and Arab people anywhere?

Click on the title just below to link back to where I first read this story, which is where the video above was found also.

DETROIT -- Police who carried out a raid on a family home that left a 7-year-old girl dead over the weekend were accompanied by a camera crew for a reality television show, and an attorney says video of the siege contradicts the police account of what happened.

Geoffrey Fieger, an attorney for the family of young Aiyana Jones, said he has seen three or four minutes of video of the raid, although he declined to say whether it was shot by the crew for the A&E series "The First 48," which has been shadowing Detroit homicide detectives for months.

Police have said officers threw a flash grenade through the first-floor window of the two-family home, and that an officer's gun discharged, killing the girl, during a struggle or after colliding with the girl's grandmother inside the home.

But Fieger said the video shows an officer lobbing the grenade and then shooting into the home from the porch.

"There is no question about what happened because it's in the videotape," Fieger said. "It's not an accident. It's not a mistake. There was no altercation."

A&E spokesman Dan Silberman said neither he nor anyone else from the network would comment about the case, and he denied a request by The Associated Press for the footage.

Detroit police were trying to obtain the film crew's footage, Assistant Chief Ralph Godbee said Monday.
Fieger said the investigation into what happened during the raid "needed to go no further than the videotape."

"The videotape shows clearly that the assistant police chief and the officers on the scene are engaging in an intentional cover up of the events," Fieger said. He said more than one camera was recording at the scene, and that the footage includes sound.

Police arrested the target of the raid, a 34-year-old man suspected of killing a 17-year-old boy, in the upstairs unit in the two-family home. Police had warrants to search both properties, and family members of the slain girl were seen going in and out of both on Monday. The suspect has not been charged, and it was not immediately clear what relationship he had to the slain girl.

The case has been handed over to the Michigan State Police to avoid the appearance of a conflict of interest, Wayne County Prosecutor Kym Worthy said Monday.
Posted by Julian Real at 9:43 PM 1 comment: