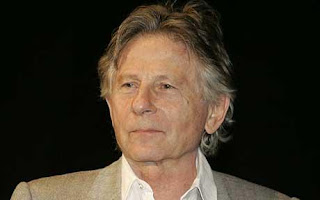 [photograph of raper of a girl and film director, Roman Polanski, from here, which also has a timeline of U.S. efforts to arrest him over the decades]

From the very important blog, abyss2hope:

Polanski was arrested in Switzerland and is now facing extradition to the US which for some is viewed as the first step to seeing him get away with his crime and get away with fleeing justice before he was sentenced.

The teenager's troubling--and contemporaneous--account of her abuse at Polanski's hands begins with her posing twice for topless photos that the director said were for French Vogue.

He even used the glass of champagne as a prop in photos he took which gave that action an innocent overtone. He not only had her hold the glass but he had her drink while being photographed. This strikes me as highly deceptive. He could easily have her drink a soft drink of similar coloring if his only purpose was the one he claimed.

By using his authority as someone taking photos for a specific legitimate purpose it makes sense that a child would do as she was told by someone who seemed interested in doing nothing more than he'd gotten permission to do. She wouldn't know when the pictures being taken of her weren't for French Vogue. Her perception of danger would be reduced significantly under the influence of alcohol. She was quite literally, impaired.

This is called misusing authority. Writing that feels patronizing, but too many people refuse to understand this concept which plays out in the actions described during grand jury testimony.

END OF POST.
Posted by Julian Real at 7:48 PM No comments: