Remembering Miep Gies (1909-2010), the brave woman who kept Anne Frank alive in her attic during the Nazi Occupation of Holland

In the early 1940s, the German Nazis deported and murdered most of Holland's Jews.

Miep Gies, who died on January 11 aged 100, was
one of a Dutch couple who hid and sustained the family of
Anne Frank for more than two years in an Amsterdam attic;
later she helped to save Anne Frank's diary for posterity.

What follows is from the Telegraph.co.uk, *here*.

Miep Gies in 1998, with a copy of her book "Anne Frank Remembered". On her left hand she is wearing a black onyx ring with a diamond in the center, a gift from Auguste von Pels, one of the doomed Jews she helped shelter. Photo: AP 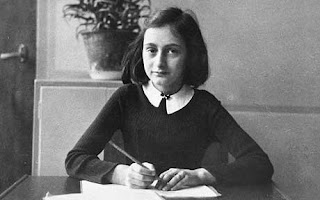 Miep Gies and her husband Jan in Amsterdam in 1987, beside the bookcase which led to the Frank family hiding place. Photo: EPA

She was born Hermine Santrouschitz on February 15 1909 into a German Roman Catholic family in Vienna, but was sent to the Netherlands when she was 11 to escape the food shortages in Austria. The family with which she lived in Leiden gave her the nickname Miep and later adopted her. By the outbreak of the Second World War she was working as an assistant to Otto Frank, the owner of a pectin manufacturing company in Amsterdam.

After the Nazi invasion of 1940, Frank prepared a secret annex behind a swinging bookcase in a room above the firm's offices at 263 Prinsengracht; and in July 1942 the family of four – Otto, his wife Edith and their daughters Margot and Anne – went into hiding, leaving a false trail indicating that they had fled to Switzerland. Soon afterwards they were joined by other Jews, the van Pels family and Miep Gies's family dentist, Fritz Pfeffer – eight people in all.

For two years Miep Gies and her husband Jan, a municipal employee whom she had married in 1941, risked their lives to smuggle in food and provisions and news from outside, begging, buying and bartering what they needed from farmers and shopkeepers. They were helped throughout by her colleagues Victor Kugler, Johannes Kleiman and Bep Voskuijl.

Miep acted as a confidante for the adolescent Anne, bringing her paper for her diary and, on one occasion, a pair of second-hand high-heeled shoes. The Gies's heroic feat of humanitarianism ended on August 4 1944, when the Frank family were betrayed (by a person whose identity remains unknown), arrested and sent to concentration camps.

When the Gestapo arrived, Miep Gies was at her desk in the office below. She recognised from the voice of one of the arresting officers that he was Viennese, and she managed to charm him, perhaps saving her own life.

She never saw her Jewish friends again but "could tell from the sound of their feet on the wooden steps that they were coming down like beaten dogs".

Later, at considerable personal risk, she went to Gestapo headquarters to try to bargain for their release – but to no avail. Eventually she returned to their hiding place and found Anne's diary, its pages scattered over the floor.

She intended to return it to its author, knowing how important the diary had been to her, and locked it away without reading a word. Nearly a year later, Anne's father Otto returned from Auschwitz. He knew his wife and friends had not survived, but still hoped that his two daughters, Margot, 18, and Anne, 15, had been spared.

Two months later he received a letter that confirmed that both girls had died in Bergen-Belsen in March 1945, less than a month before the camp was liberated by British soldiers.

Miep Gies was with him when he received the news and could not find the words to comfort him. Then she remembered Anne's diary. She took it out of the desk and gave it to him, saying: "Here is your daughter Anne's legacy to you."

Eventually published in 1947, The Diary of Anne Frank became, after the Bible, the best-selling non-fiction book in the world.

Miep Gies recalled Otto Frank's dignified refusal to seek revenge. He declined ever to identify the man who had arrested them, telling her: "Miep, that man may have children. Those children should not have to live with such a thing."

For two years she resisted all Otto Frank's efforts to persuade her to read his daughter's diaries, but eventually relented and was glad that while Anne had invented pseudonyms for everyone else, Miep's name was unchanged.

For the rest of her life, Miep Gies devoted herself to sustaining Anne Frank's legacy, answering letters from all over the world. In 1987 she published a book, Anne Frank Remembered. In it she observed: "I am not a hero. I stand at the end of the long, long line of good Dutch people who did what I did and more – much more – during those dark and terrible times years ago, but always like yesterday in the heart of those of us who bear witness."

She was decorated by Queen Beatrix of the Netherlands for her heroism and dedication and the Israeli Holocaust museum Yad Vashem bestowed on her the title of "Righteous Gentile". She was also honoured by the German government.

On August 4 every year, the day of the arrest, Miep Gies would shut herself away in her house and see no one. "I act as though the day does not exist. It is my personal memorial to my people," she explained.

In 1996 Jon Blair's film Anne Frank Remembered won an Oscar for best documentary feature. Blair took Miep Gies to the ceremony in Hollywood, and as they were on their way to the awards in their limousine she remarked that she had agreed to come because Anne Frank had always wanted to be famous, and that she had loved Hollywood. Blair took Miep Gies on to the stage when he made his acceptance speech, and the audience gave her a standing ovation. 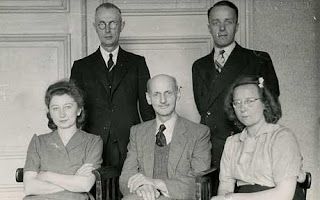 Mourning the loss of Kate McGarrigle, Canadian folk singer with her sister Anna

TORONTO — Canadian folk singer and songwriter Kate McGarrigle, best known for performing with her sister Anna, has died of cancer. She was 63.

McGarrigle’s brother-in-law, Dane Lanken, said the singer died at her Montreal home Monday night surrounded by her sisters, Jane and Anna, and her children, Rufus and Martha Wainwright, also singers.
He said McGarrigle had been battling cancer since the summer of 2006. He said the cancer started in her small intestine and spread to her liver.

Kate and Anna, known as the McGarrigle Sisters, began their careers performing at Montreal coffeehouses in the 1960s with a group called the Mountain City Four. They got their break in the 1970s, when their songs were covered by numerous artists, including Linda Ronstadt, who used “Heart Like a Wheel” as the title song to one of her albums.

In 1975 they made their first record, “Kate and Anna McGarrigle,” which brought them critical acclaim and additional famous covers by artists including Emmylou Harris, Judy Collins and Billy Bragg.

Their own well-known releases included “The Work Song,” ”Cool River” and “Lying Song.”

Kate McGarrigle received the Order of Canada in 1994, one of the country’s highest honors.

McGarrigle was once married to American singer-songwriter Loudon Wainwright III. Her son, Rufus Wainwright, recently canceled an upcoming tour, citing an illness in the family.

Born in Montreal, the famous singing duo grew up in the Laurentian Mountains village of Saint-Sauveur-des-Monts, Quebec. There, they learned the piano from the village nuns.
*     *     *
Here is Kate performing a month and a half ago, singing a beautiful and very new song Proserpina, in the Royal ALbert Hall, December 9, 2009.