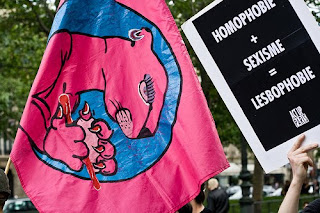 This is just one more example of what sort of asshole men there are out there. And unfortunately there are some jerk women in this mix too. Anti-lesbian misogyny, ageism, and size oppression are clearly not bounded by gender. What especially "striking" about their CRAP is how for them to find not-young, not-thin white hetero men unattractive they have to compare them to white lesbian women who are, in the examples linked to, are generally heavier and older as well. Hmmm: I think far too many white hetero men are fucking ugly (mostly in the soul area) without being compared to anyone at all.

I found this CRAP on the blog Feed Your ADHD, and it links to a really stupid blogpage that only exists to mock women, particularly lesbian women, older women, and heavy women.

Here's the post--go there if you want to be repulsed by white men and women:
http://feedyouradhd.blogspot.com/2009/10/men-who-look-like-old-lesbians.html

Here are their stupid-ass homophobic/heterosexist/misogynistic comments, followed by my reply. Another effort of spittin' in the wind?

Whole lotta Bad Friggin' Hair goin' on at that site!

When I read this, I thought of how Andrea Dworkin allegedly died while eating a ham sandwich. That has to go down as one of the most ironic deaths in history. It's not at all related to the topic, but equally hilarious. :D

Those guys are just plain scary....I can imagine obummer and moobacha on there, if they are around that long...(I could say something here, but best not to)

i think janet reno is a close match.

You know Dave, i never thought of it like that, but you and that blogger have a damn good point.

You need to add Al Frankin to that list. Stop the presses ... I just checked the site, and Al Frankin is there.

I never looked at it that way, but Moore does look like an old lesbian - so does Al Franken.

Odie, from your avatar (presuming that is what you REALLY look like - rofl) nobody would confuse you with an old lesbian.

Thats hilarious! They really Do look like old lesbians! Especially M. Moore, I can totally see the guy wearing a playtex cross you heart bra to restrain his moobs.

Which is actually rather painful.

Now that you mention it! He does!

Not that I agree with anything MM has to say, but I do have to give him a credit for sitting down on the Hannity program last week!

Very enlightening view of a libs mind set from the horses mouth.

Gaaah, my eyes! WARN someone before you spring a picture of Michael the Hutt on us. Now I've lost my appetite for supper...

Where is Garrison Keillor?

Where is Janet Reno?

Michael, Janet, Nancy, and Al are all such common friendly sounding names---what happened to these "people". Doubt if they lived up to their mothers expectations. Parents always have such high hopes!!!!!!!!

Two things. I'm a white gay man and your anti-lesbian/woman-hating is rather pathetic, if you ask me.

Also, the rumor about a woman dying from eating a ham sandwich was Cass Elliott* in the 1970s, not Andrea Dworkin this decade.

Andrea D. died from a heart condition. I think it's called
"Having to hear the immature shit put out by the likes of you."

Try and pass through puberty soon, ok? Because right now you look like a group of stupid straight schoolboys.

After I posted a few comments came rushing in to defend their turf, typically hateful and homophobic ones:

Oh...look...a white gay man named Julian. I would have never imagined seeing that in a million years.

Go spew your bullshit on someone else's pages.

No one cares too much if you're a goober smoocher either, I just hope you become HIV positive and pass it on to ALL of your faggot buddies...

And before you go off on that homophobe bullshit, NOPE, wrong, I am NOT a homophobe, I am not scared or threatened by you goober gobblers in any way, I just think you're a bunch of SICK perverts..

How the fuck is a website about men that look like lesbians anti-lesbian, ffs!! Only a lefty, who also happens to be gay, (Julian - yeesss, of course), could pervert what you said to mean the exact opposite, Dr. Dave. That's what lefties do - they also have no sense of humour whatsoever!!!

I'm pretty sure you'll enjoy this particular encounter over at Grumpy's last night, Dr. Dave - I won't say any more - that would spoil it for you! Have fun....

Of course I'll have to explain this shit to you:

White het men look ugly all by yourselves! You don't need to be compared to any other demographic for that assessment. Y'all just need to look in the mirror. You know, the one that's been cracked for years from the ugliness of your ways of being.