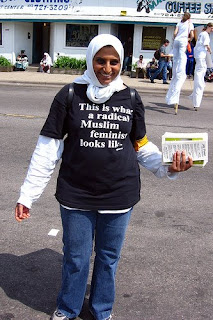 [The image above, of a radical Muslim feminist woman, was found here.]

What follows is by a non-religious and aetheist radical feminist.

Here is some of the latest radical feminist writing by Celie's Revenge, which she welcome me to share here. This was originally written in response to a discussion at a social networking site about the issue of whether there is, really, such as thing as a "feminist" man. I fully concur with Celie, that while "in theory" there could be such men, "in reality" we don't exist. And to those who name John Stoltenberg, or even me, as "examples" I'd say we're not examples. And even if we were, "two" does not a phenomenon make. Sorry. When there are several hundred, or thousand, we can all point to and say, "YES, he's been solidly in support of feminism and feminist issues without also being a misogynist jerk, a rapist, a sexual exploiter of young people, among other things that are anti-feminist practices", THEN we might be able to say "Yes, there is such a thing as a Feminist Man". I don't believe in concepts being presented as socially present if I and every radical feminist I know hasn't witnessed the reality, which necessarily means "more than two".

With Friends Like These or The Myth of Feminist Men
by Celie's Revenge, posted to a social networking site on March 22, 2009

The reasons I don't believe men can be feminist:

1) I'm so glad you've had wonderful experiences with dudes who call themselves feminist. I have not. Just the opposite in fact. It’s gotten to the point where if meet a dude who calls himself feminist I run for the hills. If it's has gotten that far--personally or politically, we’re through romantically or even as allies. Seriously. I just don’t trust feminist men. I do love and respect the work of many men who are doing anti-sexism work but I’ve never met them personally; these guys are writers or filmmakers--almost mythic like Santa Claus or the Easter Bunny…LOL. They exist to me in a land far, far away….but the actually feminist men I meet and deal with in the non-virtual world have all, without exception, been pricks. Sorry.

2) Feminist men are self-righteous. Look at how your friend reacted? Even a hint a criticism causes them to get defensive and self-righteous and hostile to the point of attacking a woman personally AND asking her to give HIM an apology? LOL. This is a feminist male ally who has TRULY interrogated his male privilege? Not in my book! Notice how your friend called me a bigot because I dare critique his views on BDSM as being sexist? What social or structural power do I as a black woman have over men when I express an opinion or perception about them as sexist? But I’m a bigot? Anyways, it’s always interesting how the oppressor uses the language of the oppressed against them to claim MEN are being victimized by WOMEN when they are “falsely” accused of sexism. As if being "falsely" accused of sexism is ever nearly as bad being the victim of sexism?

3) The feminist men I’ve encountered often times try to co-op feminism. I actually want to do a paper on the co-optation of Black feminist theory by the likes of Michael Eric Dyson and others who call themselves feminist men. They co-opt and DE-FANG feminism. They also try to make feminism into “humanism” by taking the focus off women. Yes, liberal women often do this too but it’s particularly galling when men try to do it!

4) Feminist men try to tell feminist women who the “good” feminists are. And these good feminists are rarely the radical ones, but are the ones that offer a user-friendly, male-rewarding agenda that coddles men and gives them equal standing in a movement women created and work so hard to keep alive.

5) Feminist men can use being feminist to excuse their sexism. Feminist men still don’t know how to listen to women. It’s the feminist men who tell me they love listening to women even as they cut me off, assume to know what I’m saying before I finish, and talk the most in an effort to impress me with the feminism. Feminist men are often just as sexist as non-feminist men but they can use the intellectual pretense of embracing feminism to justify their sexism and misogyny. How many times have I called a feminist dude out on his sexism only to hear him bark back, “Do you know how much work I do on behalf of women?!?” (I've yet to meet a "feminist" man who thanks ME for all the work I'VE done on behalf of women!) Feminist men rarely acknowledge that they still have male privilege whether they want it or not. So by they will be heard above women, will get more visibility and understanding than women among other perks when they call themselves feminist.

Feminist men want to be THANKED or applauded for being feminist as if doing right by women should be rewarded, rather than status quo behavior that is completely unremarkable. Feminist men do not respect women’s anger or women leadership or women’s space anymore than non-feminist men. Feminist men often use calling themselves feminist to get women to let down their guard, trust them, and then we regret it later because we are emotionally, verbally, or even physically assaulted by men we would normally not trust. And one of my favorite feminist male tactics is to get the stamp of approval from one or two very “important” feminists and then use that to silence critiques of their sexism from all other feminists. It’s like feminist men create a resume and get reference from women they only show one side to and then all other women are expected to trust and believe in their good intentions and this makes them immune to any accusation of sexism.

To be fair, yes, I have met men who are doing amazing work on behalf of women and towards ending patriarchy. But are they feminist men? Or are they just decent men? Much less rare than a dude calling himself a feminist is a just, good man doing the right thing by women and working towards the awe inspiring goal which is for men to want for women what they receive by "virtue" of being born male.

So no, I don’t believe men can be feminist. It’s a nice gesture, but as the saying goes: "With friends like these……."


Anonymous said...
I've never met any men that I would call feminist. Men think they are feminists, but this is their own self-evaluation. Jennifer's comment that they seem like the easter bunny or Santa Claus is quite accurate, or indie filmakers on Sundance. It seems that men pretend to be feminists for suspect reasons. And they don't seem to know that if a woman says they are being sexist, that the woman's opinion is actually true. Men can organize on their own to end porn, prostituion and violence against women, and they should be doing this. I'd rather work in all women's groups on projects of collective interest. It is a waste of time to engage men, they need to engage each other and let the real feminists work on women's revolution.
Tuesday, March 24, 2009 12:58:00 AM EDT

Valerie said...
I think the label is the problem. The dudes I have met who want to tell me about how empowering it would be if I hit them before I let them fuck me tend to identify proudly as feminists every ten seconds, but random decent guys who haven't bothered to think up swanky a label for themselves don't. I have mixed feelings about saying this on your blog, as you seem pretty solid.
Tuesday, March 24, 2009 9:42:00 AM EDT