Another Murder of a Gay Youth. This Time in Scotland. His name was Jack Frew and he was 16. Stabbed to Death. Dear G-d.


Bronski Beat, "Why" lyrics
Contempt in your eyes
As I turn to kiss his lips
Broken I lie
All my feelings denied
Blood on your fist
Can you tell me why?
You in your false securities
Tear up my life
Condemning me
Name me an illness
Call me a sin
Never feel guilty
Never give in
Tell me why?
You and me together
Fighting for our love
Can you tell me why?
Click on the title below to link back to where I found this at Towleroad. This is why gay men need to laugh so much about the Reker story. Because the pain of what he actually did is too much to bear, and his (and any other) brand of virulent homophobia fuels hate crimes like this. Just so you know part of my people's history, Bronski Beat was the first OUT London-based popular musical artists with politically pro-gay lyrics. This was a top ten song in the UK, as was their album, titled "Age of Consent". When this album was released in 1984, the age of consent in the UK for heterosexuals was 16, and for "homosexuals" it was 21. I had turned 21 by the time this song was a hit. And Jack Frew never will be.

To me, sixteen is a child, in terms of who adults have sex with. And this child deserved to come into a life of loving relationships, not stopped by the knife of a murderous white het guy.

To the friends, loved ones, and family of Jack Frew: my deepest condolence. -- Julian 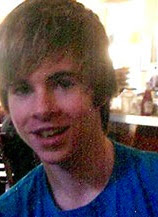 Very savagely. Jack Frew and a friend were attacked and slashed with a knife in Glasgow while walking home Thursday night. The Scotsman reports:
"The 16-year-old was stabbed on a cycle path in East Kilbride's Mossneuk area on Thursday night.

Frew, who stated his sexuality as "gay" on his MySpace profile, was a pupil at Duncanrig Secondary in East Kilbride and was described as a gifted actor who was well liked and respected in the school.

Another schoolboy is understood to have been hurt in the incident. Fellow pupils were told about the murder on Friday."

Frew died soon after the violent assault and the other victim, 17-year-old Craig Roy, remains hospitalized.

Police are still seeking a motive, but at least one news source claims that "it's been suggested this was a homophobic attack."

Julian Real-Dancing With Stephen Colbert?!! Well, you don't think ALL I do is BLOG, do you? A Boy's Gotta Dance!

WICCAN IS MY HERO. First, he's GAY. Second, he's got a typically U.S.-Ashkenazic Jewish last name. Third, his name is Wiccan. Maybe he can spell-cast to make all the closeted Neo-Conservative Republican/Capitalist Christian White Right-wingers fly out of their closets. (Yeah, try and say THAT five times fast!!! It was tricky enough to type!)

[Why didn't my generation have cool out gay super-heroes when I was a kid?! Although... Batman and Robin... COME ON! (I mean, really.) But this guy is OUT as GAY! Cool, huh? The panel of info with his image is from here]
One doesn't always like being outed, particularly when has built a tidy little socio-economic-political career working SO HARD to get gay men to not be gay. And by working late into the night to get anti-queer and anti-Indigenous legislation passed. Full story after the video clips... yes, he's a Western CRAPitalist, all the way, The Homophobic Racist Fucker. And he chose a Latino man to exploit! I'm really annoyed with how the mass media is treating "Lucien", the VERY young man Reker "rented". I've seen all manner of insulting comments, because, you know, media and dominant culture gets to treat prostitutes like CRAP, just like pimps and procurers do; as things to rent, buy, take on trips, take trips to go and fuck, etc. That damn Oscar winning song should've been called "It's Hard Out Here For a Prostitute". Fuck the damn pimps.

I know I've already run one rant on this guy, but sometimes once is not enough.
AND, HEY, George Rekers wasn't the ONLY one OUTED this week! I got a little "exposure" too, on Stevie (that's what I call him) Colbert's show. Who knew the cameras would turn in my direction--I didn't even have the chance to pull on a t-shirt?! But, once out, there's only one thing to do: DANCE, DANCE, DANCE!!  Just don't ever forget Nikki Giovanni's quote, which appears in my quotes list to the right.

Know who is playing the music before you dance. -- Nikki Giovanni

Click on any of the names of the male reporters to link back to the internet sources.

Colbert On George Rekers – WBWJR? (What Boy Would Jesus Rent?)

The rest of the story:

Comedian and writer
And This Year's Ted Haggard Rent Boy Award Goes To...

Today's moms would do well to say to their children, "If you actively work against gay people and then hire a rent boy, he'll say something bad about you."

By now you know about Dr. George Rekers, a Baptist minister and raging homophobe who serves on the board of the National Association for Research & Therapy of Homosexuality (NARTH), and was paid $87,000 by the State of Florida as an anti-gay so-called "expert witness" against gay adoption. How did he spend the money? By hiring a boy 40 years younger to go on a 10-day trip through Europe. Could someone alert the Florida teabaggers as to how their tax dollars are being spent? How about the other Florida taxpayers?

His website posted a statement denying that Rekers used the rentboy.com website to hire a prostitute to accompany him on a recent trip, but that he "requires an assistant to lift his luggage in his travels because of an ongoing condition following surgery" -- in this case a young, blond, cute, barely legal assistant with a rentboy.com profile detailing his sexual preferences, body type, and circumcision status.

One thing about today's religious right leaders: they think the public must be really, really stupid. Have you ever heard of anyone hiring someone to be his only companion on a European trip, for 10 days, for the sole purpose of baggage handling? I'm friendly with the handlers at the airport and bellhops at the hotels, but I don't want to tour Madrid with them.

What did the rent boy do while he wasn't handling Rekers' suitcases? Since he's a 2008 high school graduate, maybe he perused college catalogs. What on earth did Rekers and the rent boy talk about? According to Rekers, he found out about the kid's profession during the trip, and witnessed the Gospel of Jesus Christ to him.

If I was a rent boy and one of my johns started witnessing to me while trapped in Europe, I would stuff his face with more than a croissant.

The rent boy is talking and giving salacious details of what went on with Rekers, and says the only bags he lifted were between Rekers' legs. (Sorry, these jokes write themselves).

Meanwhile, Rekers is threatening a lawsuit, and the accusations fly back and forth -- Rekers denies he's gay, the rent boy said he wasn't but now says he is, or isn't, or just likes baby oil, or whatever. Step back and just watch this pile up.

I used to feel sorry for these closeted religious fanatics, but not anymore. Every single one of them should be exposed, ridiculed and run out of town. I don't care how miserable and confused they are; they have used their power to destroy the lives of others, they push nonsensical and dangerous "therapies," and they tell lie after lie about gay people in order to pursue right-wing power. In some cases they're not exactly race-sensitive. Rekers also advised that the adoption ban should be expanded to include Native Americans because they are also at higher risk of mental illness and substance abuse. "They would tend to hang around each other,'" Rekers testified, "So the children would be around a lot of other Native Americans who are ... doing the same sorts of things."

The Family Research Council, NARTH, and anyone else associated with Rekers has quickly erased his presence from their websites, exactly what the Colorado New Life church did to poor Ted Haggard. Christian "forgiveness" obviously does not apply to gays.

And while I'm not about to start debating the morals of prostitutes, one thing is obvious: they are who they say they are. But the poor rent boy didn't know what he was getting into with this character. Rent boys of the future should ask their prospective clients for a resume.

Moral: Before you go on a website to hire a rent boy, talk to Ted.
For more, see: “Hey, George, How’s That Ex-Gay Hopey-Changey Thing Working Out?“