LACK OF RESISTANCE IS NOT CONSENT!!! '... Steps to Prevent Rape' Poster, by Marcella Chester 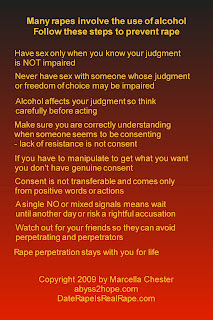 A feminist blogger @ abyss2hope, linked to from my blogroll to the right, created this poster.
To see it at her blogsite, please go here.

Thank you, Marcella, for all your great work.

"The NT Emergency Response (NTER) measures have disempowered Aboriginal people. The suspension of the Racial Discrimination Act has taken away our rights. It has taken away our land rights, our ownership and control. We have no say in the running of our communities or lands. There is no self-determination.

"We are taking our message to the Australian public to let them know exactly what is happening under the NTER.

"We need to get rid of the racial discrimination policies that are imposed by the federal government!"

Richard Downs will speak at the Manning Clark Lecture Theatre from 6 p.m. Friday 9 October as part of a speaking tour. Harry Nelson from Yuendumu and Euahlayi activist Michael Anderson are also speaking.

Michael Anderson says: “I hope that the visit by Richard Downs and Harry Nelson will act as a single stimulus to motivate people into calling for the Australian government to not only reinstate the Racial Discrimination Act but also that their speaking tour will act as a trigger to activate all Australians to demand Section 51(xxvi) of the Australian Constitution is put to a national referendum in order for it to be deleted:

51. The Parliament shall, subject to this Constitution, have power to Commonwealth with respect to: -

xxvi.) The people of any race, for whom it is deemed necessary to make special laws:

“I am constantly commenting on this hideous section which establishes Australia as a stand-alone country, where the constitution provides the legal framework for the government to pass laws for any race it deems necessary.

“Australians need to be aware that Section 51(xxvi) can also be used to deport any race deemed necessary.

“This has been done once in Australian’s history when from 1954 onwards Aboriginal Peoples were removed from the Australian Capital Territory. The new queen Elizabeth II assented to “An Ordinance Relating to Aborigines” (ACT No. 8 of 1954) which relied upon section 51(xxvi) to make it possible for the Ordinance to remove Aboriginal people from the ACT and relocate them elsewhere.

“In the Hindmarsh Island High Court decision Justice Kirby made it very clear that Section 51 (xxvi) can be used to the detriment and not always for the benefit of any race.

“The Australian public needs to understand that there can come a point in history when the powerful can convince the public into believing, through total ignorance and manipulative lies by those who seek power, that what they do is in the interest of the nation and the dominant society. People will put them in power.

“It will be one of these types of leaders who could use this section 51(xvi) of the Constitution, without any regard for public opinion and will say ‘it is in the national interest.’ This will be a sorry day.

“It was once said in Europe that the cultured and civilised society could not possibly have experienced what they did during the Nazi regime. Let us all learn from this and make sure this will never happen again.”