Ruchira Gupta: The Commonwealth Games are No Place for Pimping. Sign the petition if you agree with her.


Wherever men with money carry a belief that women are for men for what pimping and procuring men call "sex", there is sexual trafficking. Whether in Nepal, India, or across Europe and North America. Where men gather with the will to rape and purchase women, trafficking is there. But states and nations can oppose it, and work to end it, if women are human to the leaders. 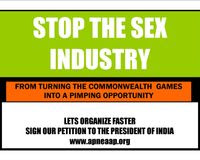 Apne Aap Women Worldwide appeals to the President of India, Srimati Pratibha Patil to ensure that the Government of India puts into place sufficient mechanisms to stop the proliferation of sex trafficking in the run up to the Commonwealth Games. As brothels and escort services along GB Road fix up their rooms and double their rates in anticipation of a boom in sex tourism, their brokers are hunting rural and tribal areas across the country in order to find new victims to bring into prostitution.

We appeal to the President to order the CWG authorities to:

2. Set in measures to protect the more marginalized women, who have been brought into Delhi as labour for the construction of roads, stadiums and houses, to go back home safely, provide tickets and bookings as well as protection from property snatching or rape during this period, or provide safe accommodation once their contract is over;

3. Hold sensitization workshops for police officials, tour operators, transporters, labour contractors, on treatment of women migrant workers as well as new women who are being trafficked to the city;

Organize surveillance of sex sites to check the sex industry from turning the CWG into a pimping opportunity.

We are basing our recommendations on site visits to brothels, reports in the media, and revelations made by NGOs:

%uFFFD Hundreds of girls are being kidnapped from all over India and are being prepared for the CWG in villages in Alwar, Rajasthan, with oxytocin injections to make them more voluptuous for prostitution. (May 27th, India Today; Girls drugged into puberty, sold as prostitutes)

%uFFFD According to Mr. Rishikant, Founder of Shakti Vahini, an anti trafficking organisation working in GB Road, the organisation has rescued between 40-45 girls since March of this year indicating an increase in the number of women and girls trafficked to meet the demand during the Commonwealth Games. The rescued girls originating from Orissa, Jharkhand, West Bengal, Assam and Bihar range in ages from 13yrs to 17yrs.

%uFFFD According to Action against Trafficking and Sexual Exploitation of Children (ATSEC), girls are being trafficked from tribal areas in West Bengal, Jharkhand, Chhattisgarh, Tamil Nadu and Karnataka, to serve the huge number of foreigners coming during the games (June 7th; The Telegraph; Giving the game away - Commonwealth Games raises trafficking fears)

%uFFFD Trafficked girls and women on GB road are being given one- hour sessions every morning to learn English and are being taught words like %u201Chello, thankyou%u201D %u201Chow are you?%u201D and %u201Cplease use a condom%u201D (May 30th; Deccan Herald, Brothels get a facelift ahead of Commonwealth Games)

%uFFFD GB Road, the biggest red light district in Delhi, is getting a %u201Cface-lift%u201D to make it more appealing for the foreign clients. AC%u2019S, LCD TV%u2019S, fridges, etc. are being installed by the brothel owners ( Hindustan Times, 30 May).

%uFFFD Tina Jaiswal, owner of Delhi%u2019s NO 1 escort agency said, %u201CWe hope to make good money during the games. We will simply follow the demand and supply principles of economics. We will double our rates a month before the games begin and increase our work force%u201D (Youth Ki Awaaz).

In the meantime, the government has set up hundreds of condom vending machines. These machines can only be a poor substitute for rights of women and girls. The code of conduct prepared by the Tourism Ministry is for hotels and tour operators and will only apply to women and girls being brought to hotels and not to the brothels. Apne Aap had applied for a place in GB Road to the authorities at the Central and Delhi to set up a support centre for such women and girls. Nothing has been heard of this application though the CWG is only six weeks away..

We appeal to the President to act promptly on behalf of girls and women at risk in India.