The Father As Rapist of Girl Children: a nerve has been struck. This means that fathers ARE raping their daughters...

... and many are making pornography of the abuse. And white heterosexual men, among other het men, would like it very much if we all would please stop talking about it ASAP. And, especially, not call on other het men to hold one another accountable to these crimes against humanity. Fathers holding each other accountable. Imagine THAT.

Imagine men untwisting their pants long enough to not be so upset by what one man writes, and instead be MORE upset that fathers rape their daughters and het men do not organise around this issue.

WHM will find any discussion about fathers raping their daughters far more horrifying than the fact that daddies do it. They will be MORE offended by a couple of blog posts on the subject, than the fact that fathers won't do jack shit to stop other men from committing rape of girl children (and of women).

Here are the stats for the traffic to this blog over the last seven days. See which day's traffic is not like the others. 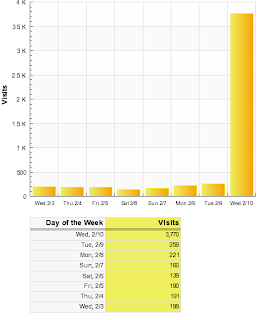 What this means is that I've hit a nerve. Or I ought to thank AnnArchist for posting this to reddit.com in their version of a "wtf?!" section. Or both. We'll see how the comments go.

If and when a nerve like this has been hit, you better believe it's not because one little blog post is so goddamned "offensive" or off the wall. I mean privileged white het men are all for free speech, right? The celebrate it. Right? I mean their "free speech" called pornography--pimped and raped women AND girls being coerced into saying what pimps want women and girls to say in front of a camera, including with their bodies non-verbally--is to be protected and made available to WHM 24/7, right? And THAT'S not offensive, is it? The rape and pimping of women and girls in pornography is NOT offensive, compared, to, oh, say, one white gay man's blog post about how commonly fathers rape their daughters. ONE. BLOG. POST. (Well, yes, now two.)

Now, let's have a reasonable, RESPONSIBLE, RESPONSIVE conversation about THAT, shall we? And let's put all the sidetracking and misplaced rage and offense and hurt aside, to deal with THAT issue. AND the issue that fathers and father-figures DO rape their daughters. Sometimes they pimp them out too.

My writing is not nearly as offensive or outrageous as THAT, is it? (Is it??)

Let me tell you what is likely to happen.

What is likely to happen is there is going to be a ruckus. Because white het men's entitlements and privileges include not having to challenge each other on matters of men's sexual violence against women and girls. So rather than focus directly and only on that, there is going to be a lot of diversionary tactics employed, with all manner of "well, women hurt kids too!" (Yes, and so fucking what? Does that mean we can't focus on this issue? Why can't we?) and "how dare you call all fathers rapists!!" (Um, I didn't.) One man already accused me of calling fathers child-raping animals. No, that's what rapists and other misogynistic men say about themselves, actually: that we can't help it. That our testicles and penises do our thinking for us. That we are sexually abusive because of testosterone, depression, being fired from work, alcohol abuse, an unloving spouse. That it's psychological evolution. It's sociobiology. It's wired into our brains, wherever those brains are located.

I don't say any of that, nor do any radical feminists I know. We believe in the humanity of men. It's men who won't challenge each other to be more humane. And I believe men will find any reason at all to deflect from this subject: why do fathers work for one another's rights, but NOT AT ALL for one another's responsibilities not to be rapists of their girls?

The het men will get to whining, BIG TIME, about how offended they are, and how much such conversation victimises them. To het men: women I know are offended and victimised that so goddamned many of you rape women and girls or speak about it in a joke, or hurl misogynist terms at women and leer with sexual interest at girls half or one third your age. Yes, het men will be offended, greatly, by one man calling on them to be as responsible with their power as they are defensive of it. And the most privileged of those het men, the economically more stable white ones, will lead the charges of offensiveness and victimisation. Just wait, watch, and see. And I'd love to be wrong about this, by the way.

To all dads of girls: in case you weren't aware of it, it is likely to be males in your daughter's family who sexually assault her, if you're not already doing so, or even if you are. So let's stay with THAT offense long enough to address THE QUESTIONS in bold above.

And if white het men write to me about other matters, I'll surely take that as a sign that you've got something to hide and protect and keep secret. Because, otherwise, why would it bother you so much? Surely you know, from the experience of your own childhood, that men tend to be more horrendously and sexually abusive than do women. Remember your childhood? Surely SOME of you have sisters who were raped by your fathers. Surely some of you watched your moms being bashed by your father's fists.

But we're supposed to respect fathers as GODS, right? "God The Father" and all that CRAP. Well, I say it'd be better for us to consider children as sacred, and to consider it to be men's responsibilities to hold one another accountable for the crimes against children we commit. Disproportionately FEMALE children, in OUR OWN families.
Posted by Julian Real at 12:03 AM 11 comments: