A commenter here gets her say: PLEASE READ! 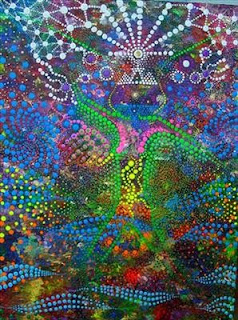 [image of gorgeous artwork is from here. Please click on link for more artwork. This hand-made (not computer generated) painting is titled "Woman Power" and is 40cm by 30cm. For more about the Israeli artist, Keren Or Benafshi, see here]

One of the commenters at this blog had a response that wanted to make more accessible to readers here. I asked her if I could make it a separate blog post. She agreed. Here it is. (Very minor typos were corrected by me in what appears below so that if someone wants to translate this into another language the translation will be more accurate.) For its original location on A.R.P., at the October 2 JERK MEN post, see here. All of what follows below is her writing.

I don't think these guys are going to get outraged at their fellow men for being rapists. I don't see men marching in the streets to protest the rape of women and girls. They do sit home and watch football. I've never once heard a man get morally outraged to the point of anger over women getting raped ever. Never ever heard a man IRL ever say anything like this. Hey I'm in my 50s, I meet thousands of men and women every year, I travel widely. Never hear men ever bring up atrocities against women of their own free will. I have to bring up the subject always, and they never care when I do bring this up.

I really don't think men as a species are capable of caring about women or girls at all, they just want to own women, have sex available or provide for their property upkeep.

And why is it that men who are supposedly so "logical" and "scientific" don't deal with the stats about who does what to whom and how frequently? If hundreds of thousands of women and girls are raped in a male led civil war, where is the international male outrage against this? I don't see it, I don't hear it. I can honestly say that I never ever hear any male outrage about any of their sex crimes, their sexual obsessions, their sex saturate lifestyles.

Perhaps men really aren't fully human after all. I really wonder because there is no action on their part that I can see IRL. Blogs like this are rare to non-existent. I don't think men want to care about anyone but their own selfish interests, and they'll keep on doing this till the end of time, that and letting rapists out of jail so that these men can continue to have access to children.