Ought men call ourselves Feminist or Profeminist? A question worth asking, without an easy answer 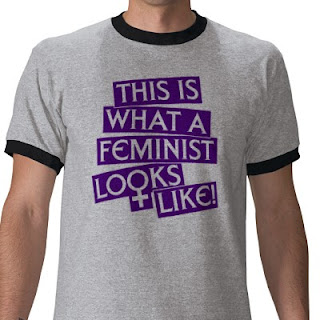 [image of this photographically handless, headless, and lowerbodyless man in t-shirt is from here]

Far easier to answer is whether men should be one or the other. The answer to that question is, imo, "Yes".

This has been an on-going conversation, in some ways, but for me it is one that I've settled--for now. The consensus among radical feminist women I know is that men have a habit--a deeply male supremacist one, among others--of appropriating women's language, energies, politics, agendas, and actions and then claiming them as our own.  Or we call ourselves feminist and have no intention of truly being accountable to feminist women and women generally. Or--obnoxiously to be sure--men delusionally claim we can "do" feminism better than women. So those men who respect this position held by many radical feminists I know tend to call ourselves profeminist although I think that term needs some caveats or addenda. Hence, in my case, I'd call myself a radical profeminist who is supportive of radically pro-woman activism and who actively engages men, confronting them on their/our sexism and misogyny, as well as on their misogynistic racism, heterosexism, lesbophobia, and more.

The compelling argument made by other feminists, is that men shy away from really committing to anything that has to do with women's political struggles, and will find linguistic ways of manifesting that distancing, hence men saying they are "profeminist" not "feminist". Sort of like being pro-running but not a runner oneself. I think this is true.

My own radical lesbian feminist mentor was all for men calling themselves feminist, so as not to duck out of taking on the struggle as determinedly as any woman would. How I arrived at my own moniker is that the women who currently are in my life (my mentor passed away many years ago), prefer men use the term "profeminist". So that's what I do. I'm not wedded to the term. I'm committed to the politics. The name, in some sense, means very little. I've known plenty of "feminist" and "profeminist" men who do or have done despicably misogynistic things without being at all responsible for having done them. First, the most responsibly and "feminist" thing would be to not do them in the first place--something worth considering! Second, men ought to fully owning up to what we do that betrays one woman or many women in any way, and not making excuses for committing the harmful/oppressive/destructive act(s). And we ought not be defensive or argumentative when women's anger is expressed to us for what we did that was outrageous, abusive, oppressive, or a betrayal. We should listen, reflect, and grow as humane beings.

So, for now, men being profeminist is my own preference although it does bother me if any man chooses that term in order to distance himself from any significant commitment to "the struggle". But it bothers me more when men call themselves feminist and then enact all manner of sexism on the women in their lives.

Being profeminist means a great deal to me in terms of how I live my life. First and foremost, it means not abusing women. Period. If men would only do that, things would change radically. Second, it means being honest, transparent, and accountable to women. It means not being a liar, a cheat, or, well a prick or P.R.I.C.K. Third, it means knowing as much as one can about women's experiences of male supremacist violence and socialisation without draining women's energy in the process. Women are not on Earth to teach men how to be human, but you'd never know that from patriarchy. And women often enough are the primary raisers of children, only to see their sons betray them when the boys become men, by doing to women things that are atrocious and normally misogynistic.

Being profeminist means knowing as much as possible about how male supremacist dynamics play out interpersonally and institutionally. That may require a fair bit of reading, or many conversations with other profeminist men, or a whole lot of listening when being called out by women for what we do that is sexist.

My life is organised around supporting women in a variety of ways, and is intentionally not organised around supporting men. I only have two men actively in my non-cyber life. It's better that way. My energies are clearly better suited to validating women's experience, caring about how women are doing, and caring for those women who need extra levels of assistance in times of crisis or due to aging. I love women in a way I do not love men. And that doesn't mean I hate men. (Duh.) Were I a lesbian woman, there's little doubt I'd be a separatist, assuming I had similar life experiences due to that love of women and that commitment to putting my energies towards women and movements designed to bring women more freedom from patriarchal atrocities, exploitations, and annoyance.

Those dimensions of my profeminism that might not manifest for other profeminist men. I think there are men whose best work is done assisting other men in "getting it" that we, the boys, are responsible for patriarchal atrocities--we, not only the rapists--assuming we are not among that population, are responsible for ending rape. I tend to have little patience for men's sexism and misogyny, unless it is being directed at a woman I know and she requests me to clear up some stuff for him about how he's treating her. I'm not always able to do this effectively. My tone of engagement with him is based on what would be most helpful to her. "Effectively" hear means she feels human, seen, and heard, not him. If he gets it, he gets it. Men, in my experience, are extremely practiced in the art of willful ignorance when it comes to noting (and changing) how our behavior negatively impacts women and their fight for liberation from patriarchies that benefit men so much.

I am probably an atypcial gay profeminist in the sense that I don't much like men as a class of people. (I feel very similarly about whites.) How I feel about men individually varies across the spectrum from great respect and affection to disdain and revulsion. While attracted to some men, that attraction usually will fade, wither, and die much like an orchid dropped into a pot of boiling water. This fading of warm feelings tends to happen within a few conversations, as men tend to demonstrate to me the ways they don't respect women within that short a span of time. Sometimes it only takes one conversation. If a man calls a woman (in conversation to me or otherwise) a b*tch or a sl*t or any number of other misogynistic terms, he's out of my heart. Purged. Men's sexism angers me I think because it ought to; it ought to anger everyone who witnesses it. And rage is not an aphrodesiac for me--thank goodness. Much of what men do in order to be "men" or to establish dominance and control over one woman or many, pisses me off a lot.

So that's where I stand on this whole issue of what to call oneself. Make sure you actions, private and public, are in line with your professed values, and own and be transparent and honest when they are not. And after doing that for a while, ask the women around you what they consider you to be: profeminist or feminist, or neither.
Posted by Julian Real at 2:48 PM 7 comments: