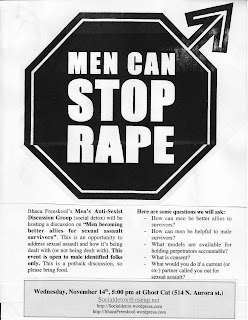 [Image/poster was found here. Click on the image to enlarge it to poster-size. My understanding (and I could be wrong) is it can be printed out at that larger size.]

Thanks to Marcella @ abyss2hope (listed in the A Radical Profeminist blogroll) for bringing my attention to this document. Her blog post about it can be found here.
END OF POST.
Posted by Julian Real at 7:54 PM 2 comments: 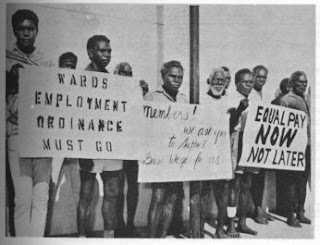 [Image is from here.]

What this "endorsement" actually ends up achieving has yet to be demonstrated.

Here is a source for this news.
END OF POST.
Posted by Julian Real at 7:37 PM No comments:

Although we had learned to approach most things political with tentative enthusiasm and trust, it really never occurred to us that men could use feminism and their claimed repentance for being a past misogynist as just another way to exercise power over women and our movement. Because once you’ve confessed you have nothing left to hide? Once you’ve come clean, you are just that, right? Innocent and trustworthy? After you’ve aired your dirty laundry, your drawers are clean and no one can come back at you and say there’s more dirt or new dirt on you. If you’ve admitted to the “worst” form of misogyny which is physical abuse, like Kevin Powell did, you can only get better from there, right? Next to admitting to being a batterer, most other misogynistic behavior automatically makes you a combination of comrade and choirboy. Telling women the worst of what you’ve done takes you a step up from being the unconscious prick you were before; it’s supposed to be a step in the right direction, a direction down a path without the residue or repackaging of the same old woman-hating. You might call those of us women who have held these assumptions woefully naïve, but this expectation doesn’t come out of nowhere. It comes from the proclamations of these radically “reborn” men. They’ll tell you what they once did, back in the day, before they saw the feminist light, but they are less likely to tell you how they continue to act out their male privileges and power, in newly cultivated and highly manipulative ways.
-- Celie's Revenge

It is with great respect and appreciation that I present that portion and link to the whole of the latest essay by radical feminist Celie's Revenge. (See *here* for the first post on her writing about "feminist" men.)

A man who I consider to be profeminist is Byron Hurt, and I wish far more men were far more like Byron. In a comment he made to Jennifer on her Facebook page, he noted how he's been challenged by feminists to also identify himself as a feminist because, for them, the term "profeminist" makes it seem like the man is not really willing to stand up with feminists, but rather will find it sufficient to somewhat passively support feminists, applauding from the sidelines. (I see the argument here, and once upon a time called myself "feminist" for precisely that reason.) Other feminists have challenged him to call himself profeminist, noting that men who call themselves "feminist" are far too often attempting to co-opt the various women's movements and struggles toward Women's Liberation.

I think Celie's essay gets to the heart of the matter: how do men who call themselves feminist BEHAVE towards Womanist and feminist women--and every woman, regardless of their politics and worldview? What do these men DO that they call "being a feminist man"?

In my experience there are so few men who call themselves either that we really needn't take much time debating this. When (very rarely) pressed on the matter, I prefer to say "I'm a white man who actively supports and defends radical feminist and Womanist policies and practices as well as radical feminists and Womanists. I do this in part by being actively pro-Women's Liberation every day, by owning my privilege, by not being in denial that I can be a white male supremacist and otherwise oppressive to women at any moment, and by maintaining interpersonal and social relationships through which I am held to account for my actions by women who demonstrate a commitment to call men, including good friends, out on our CRAP, without "taking care of me" in the process. I also support a radical agenda for Women's Liberation by being a white man who interpersonally supports women of any color in ways women welcome and want to be supported to end racist patriarchy".

But that would be a bit wordy for a blog name.

Please click on the title to link to the full text of Celie's essay, which appears on her blog of the same name, Celie's Revenge: With Friends Like These... or The ReTOOLed Misogyny of Feminist Dudes.