This Advocate Cover is so Damned Racist and Heterosexist 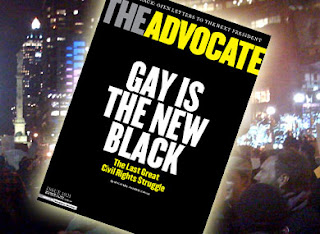 I never have had any confidence at all in The Advocate speaking for a majority of queer folks, who, btw, are not white. This is not to say the magazine is "all white". It isn't. But it is a pro-liberal, pro-corporate, pro-consumerist magazine, promoting a sadly and predominantly dominant cultural and political agenda that won't benefit hardly anyone but possibly the most privileged white gay men.

Once again (and again, and again...), the assumption is made, as in the cover's saying, that all the gay folks are white, and all African Americans are heterosexual. WRONG.

I may write about the content of the article as well, but just wanted to get this stupid Advocate cover posted, while it's fresh.

As for the subtitle on the cover, "The Last Great Civil Rights Struggle", I address this comment to the white male author, Michael Joseph Gross:

There are several "last great civil rights struggles" going on, and many human rights struggles as well, one of which is to radically challenge heterosexism and homophobia. Fighting white supremacy, anti-Black racism, and other forms of racism, are still "Front and Center" in the struggle, if you care about humanity. So too is the fight against male supremacy and misogyny, Western cultural and economic imperialism, and ecocide. And each of these struggles is intricately intertwined, overlapping, or synonymous in the experience of many human beings.

For those who don't know it, what is now often termed "Queerness" has its roots in civilisations, societies, and communities that were and are not white-majority or European. And in many societies that have since been seriously and detrimentally impacted, if not destroyed, the "queers" weren't seen as odd or peculiar, as we are now in white heteromale supremacist Amerikkka.

Here is a resource page, and as the disclaimer says, an imperfect one at that, with a list of African American same-gender loving writers. It's a good starting point for self-education, if you are among the people who are white and who also conjure up an image of "white people" when you hear the term lesbian and gay community.

19 Nov. 2008 UPDATE! Queerty's site has an analysis of the Advocate cover article, with a handy pie chart!!! 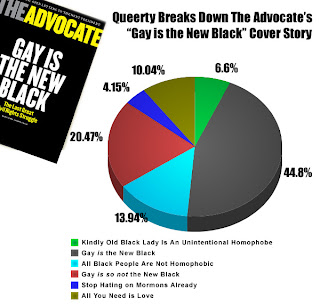 Let's give the last word to conrad who posted a comment following the Queerty critique:

this is identity politics at its worst and ugliest. im so tired of lots of white folx saying gay is the new black, as if there arent any queer black people (that bare the brunt of both white supremacy and homophobia)…