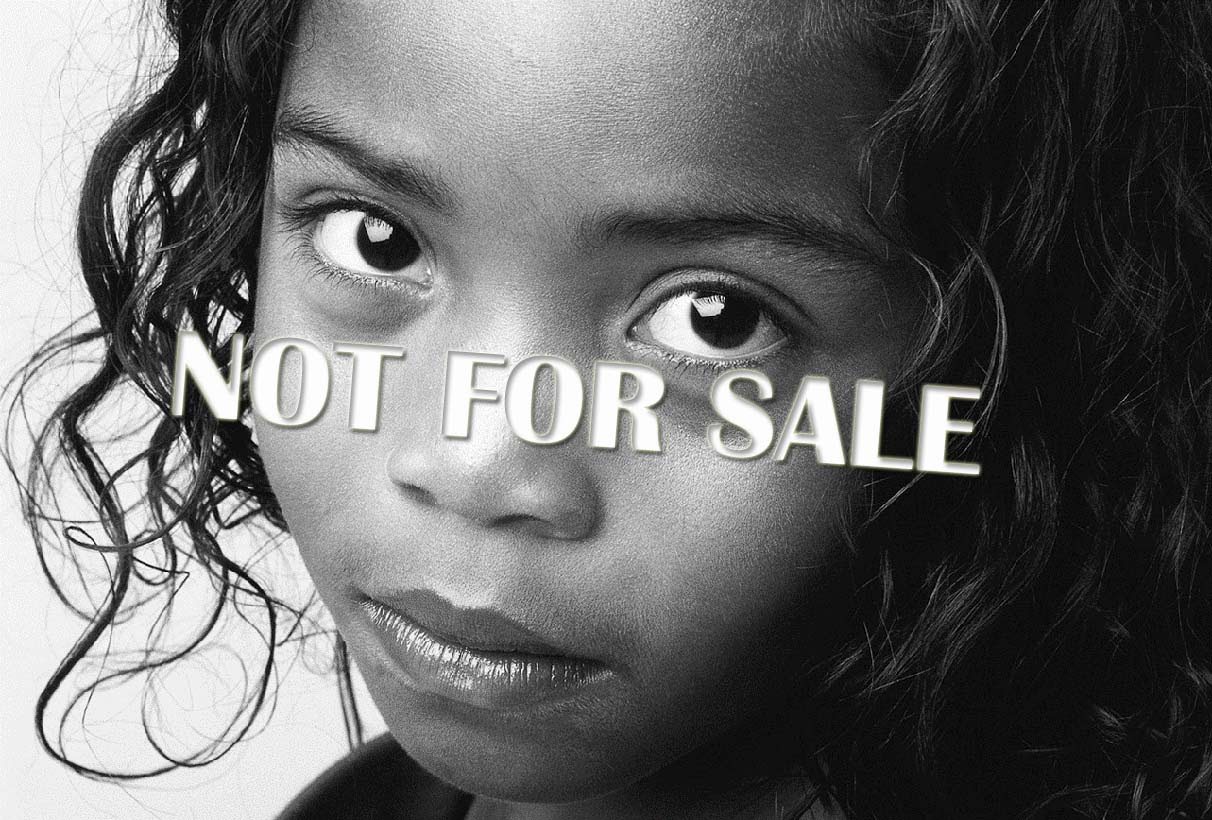 [photo of girl wearing lipstick is from here]


Victims and survivors of trafficking want us to not accept their slavery as inevitable by simply trying to mitigate its circumstances through the offer of beds in shelters or condoms in brothels. They want us to dismantle the very system of trafficking by bringing traffickers and end users to book. They want a world in which it is unacceptable to buy or sell another human being and to create an economy in which one is not forced to sell oneself. They want Human Rights Principles to ensure their right to food, housing, education and livelihood to pave the way for their right not to be trafficked.

My organization has a membership of over ten thousand trafficked human beings. They are women and children trapped in prostitution. They were kidnapped, sold, coerced, tricked or forced into situations of exploitation. Some are as young as seven.-- Ruchira Gupta, of Apne Aap Women Worldwide

I hear and read pro-prostitution advocates and pimp-apologists and patriarchal procurers argue for legalisation of prostitution. They take this stand rather than advocate and stand in alliance with those who are working for the criminalisation of pimping (buying, stealing, beating, and raping), trafficking (transporting across regions), and procuring (renting and abusing) human beings for men's profit and pleasure. To do this, to be "for prostitution", serves whose interests, politically? When only class-privileged and white women and men advocate for this, I want to ask them: Are you directly accountable to the particular poor women of color worldwide who do not have Western or white privileges, who were raised in poverty, and for whom the distinctions between "prostitution", "sexual trafficking", and "sexual slavery" are meaningless? Because that is most women (and girls) in prostitution.

Most women are not choosing prostitution as a means of paying for college. Most women are not in prostitution because it is, in any ethical sense, in any sense of empowerment that has human rights meaning, "a choice". Do you understand that arguing for legalisation puts women's and girls' lives in greater danger? What do you say to the girls and women who are harmed more because you won't support criminalising being a procurer regionally and internationally? What follows is a speech delivered by Ruchira Gupta, who works in close alliance with poor girls and women who have escaped prostitution. Whites take notice please. Class privileged folks take notice please. And Westerners take notice please. Because if it feels like "a choice" for you to be in prostitution, you're at the tip of a brutal iceberg, and your position ought not dictate policy and law any more than the rich ought to dictate economic policy and law for everyone else, who are mostly "not close to rich". What follows may be linked to be clicking on the title.

I am Ruchira Gupta and I bring greetings from the victims and survivors of sex trafficking who are members of my organization, Apne Aap Women Worldwide in India. We appreciate the attention that the High Commissioner for Human Rights has devoted to the issue of human trafficking and the fact that she has invited us to contribute to the Guidelines on Human Rights from a survivor-centric perspective.

The victims and survivors of human trafficking that I represent see visibility, accountability and access to all civil, political, economic and social rights as the best way to combat trafficking. They want their slavery to be acknowledged as slavery. They want all forms of their enslavement including prostitution to be not defined as a choice but to be acknowledged as the absence of choice. Nobody chooses to be born poor, female, low caste, fairer or darker in colour, or as an ethnic or religious minority.

Victims and survivors of trafficking want us to not accept their slavery as inevitable by simply trying to mitigate its circumstances through the offer of beds in shelters or condoms in brothels. They want us to dismantle the very system of trafficking by bringing traffickers and end users to book. They want a world in which it is unacceptable to buy or sell another human being and to create an economy in which one is not forced to sell oneself. They want Human Rights Principles to ensure their right to food, housing, education and livelihood to pave the way for their right not to be trafficked.

My organization has a membership of over ten thousand trafficked human beings. They are women and children trapped in prostitution. They were kidnapped, sold, coerced, tricked or forced into situations of exploitation. Some are as young as seven. They have been kept in small locked rooms and raped repeatedly. They live in absolute terror. Most die by the time they are thirty or thirty five. They never had a past, and now they hope to have a future.

We have been organizing survivors and victims of trafficking in groups to be able to collectively struggle for their own rights and entitlements. We have formed 150 self-help groups. These groups are demanding arrests of traffickers and end users, jobs, safe housing, and education as a combined best practice to dismantle the system of trafficking.

We have held conferences of survivors in different states in India to develop a survivor framework to combat trafficking. The first demand that survivors lay out in these conferences is that they want accountability. They want their exploitation to be recognized as a crime. They want states to admit that they are citizens of the state, whose human rights have been violated. They want protection. They want both their own state and the global community to provide them protection. They want those responsible for trafficking to be punished and stopped. They want interventions to focus on the responsibility of those who buy trafficked people such as buyers of prostituted sex and those “entrepreneurs” (traffickers, procurers, pimps, brothel owners, and managers, owners of plantations and factories and money lenders) who make a profit off trading in women and girls, boys and men.

So far a large number of trafficking interventions have focused on the victim through rescue and post rescue care. While this has provided much-needed relief to victims and survivors, it has not made a dent in the trafficking industry. According to a study by the National Human Rights Commission of India, most traffickers state that they identify the demand areas before indulging in trafficking to ensure ‘prompt delivery.

In each of the survivor conferences, in state after state in India, and even in the conference organized by the Office of the High Commissioner for Human Rights, at the United Nations in New York last year survivors have repeatedly said they want the demand for trafficked sex and labour to be addressed. They say and I quote Fatima Nat Dhuniya, trafficked when she was 12 in Bihar: “As long as buyers and traffickers exist, somebody will buy us and the slavery business will never close down.”

Our survivors believe that if the number of convictions goes up, the costs of operations of human trafficking will become untenable and the business models of traffickers will be disrupted and individuals who create the demand will be embarrassed by being identified.

The second demand that survivors are asking for in each of the conferences is access to all their economic and social rights along with their civil and political rights. They want more than a bed in a shelter or a condom in a brothel. They want access to safe housing, education and training, jobs, land and livelihoods based in open communities.

They want both the process of human trafficking to be tackled as well as its outcomes. In this context they say that border management is not the answer to trafficking. In fact, they say that trafficking is not always about movement of forced or deceived people across borders. It is also about those whose vulnerability is abused to trap them into situations of exploitation in brothels, sweatshops, and farms, sometimes in the very places where they were born. Those targeted for commercial sexual exploitation and cheap labour share key characteristics: poverty, youth, minority status in the places of exploitation, histories of abuse, and little family support. They want comprehensive protection programmes that address their vulnerabilities. They want legal protection tied in with viable economic options and the notion of rehabilitation to extend to community empowerment as well as individual empowerment.

They also want immediate relief from the violence, trauma and sever exploitation that they were subjected to. Trafficked women may be freed from their employers in police raids, but they are given no access to services or redress and instead face further mistreatment at the hands of authorities. Even when confronted with clear evidence of trafficking, officials focus on violations of their immigration regulations and anti-prostitution laws, rather than on violations of the trafficking victims’ human rights. Thus those women who are trafficked across borders are targeted as undocumented migrants and/or prostitutes, and the traffickers either escape entirely, or else face minor penalties. By making the victims of trafficking the target of law enforcement efforts, governments only exacerbate victims’ vulnerability to abuse and deter them from turning to law enforcement officials for assistance.

By allowing traffickers to engage in slavery-like practices without penalty, governments allow the abuses to continue with impunity. Some brave girls and women, and men are in a faceoff with traffickers and police in a small village Forbesgunge in my own country, India right now. Due to the failure of police to arrest traffickers, in spite of repeated complaints for the last six months, four 12 year old girls trapped in home based brothels, have already been prostituted and are being raped repeatedly. The police has refused to act in spite of political and judicial pressure and the traffickers have issued death threats to Apne Aap community members living in the red-light area. Unless law enforcement agencies take action against end users and traffickers no human rights programmes of victims and survivors can be implemented.

Apne Aap survivors have repeatedly been petitioning the Parliament of India to change its law to include more severe punishment for buyers and traffickers. Each country needs to amend its own laws to tackle this growing crime and tragedy. The Central Bureau of Investigation in India said that there are 3 million prostituted children in India today. This number has grown by seventeen times in the last fifteen years. No country can afford to delay in amending laws to change this rapidly growing crime.

I appeal to member states, including my own country to apply a human-rights based approach to identification, victim protection and support that is embedded in the UN Protocol and put addressing the demand for trafficking, exploitation of victims and abuse of a person’s vulnerability at the centre of the amended laws. We want the practical applications to not dilute, modify or change the UN Protocol. protocol but strengthen it in every way.