TRIVIA: Voices of Feminism - On Lesbian Existence and the Future of Lesbianism 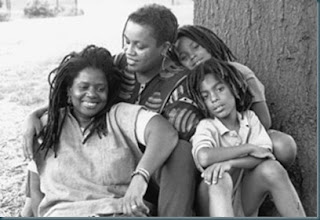 [this image of a lovely lesbian family is from here]
The portion of what follows, between the sets of three asterisks, can be linked to directly by clicking on the next sentence that begins with the word "TRIVIA:"...
*     *     *
TRIVIA: Voices of Feminism - where women's ideas can assume their original power and significance

Trivia 10, edited by Lise Weil and Betsy Warland, the longest and possibly most thought-provoking issue we've published to date, features seventeen writers responding to the question "Are Lesbians Going Extinct?". Trivia 11: "Are Lesbians Going Extinct"#2, also edited by Weil and Warland, will appear in September 2010. Click here to submit [material for that second issue on this same topic.]


*     *     *
Lesbianism, in many forms, exists world-wide. Here is a video about a story of two white women from the U.S., who were both lesbian-identified and partnered, with a daughter who was their child. Until one woman was "born-again" as an allegedly heterosexual Christian woman.

I've been concerned about this for years. I'm glad there's now finally a published extensive discussion about it. Too many women I know who, at one time, would have happily called themselves lesbian (and radically feminist), are now being railroaded. By whom? A collection of forces:
These and other forces seen to undermine lesbianism as a non-masculinist (not "anti-man"!!) humane sexual relational reality and a political stance of being loving to and with other women (not "man-hating"!!). These forces accomplish this in many ways, in many social spheres. One method is to encourage women who are lesbian-identified to unname themselves as such. Why? And whose interests, politically, are served by this happening? Not mine as a gay man, I'll tell you that. And not the political, social, psychological, and spiritual interests of any lesbian who I know.

I'm not a believer in "woman" as a biological category. So let me state that up front. I do not believe women are born, or that there is such a thing as a "Woman Born Woman", which is a term that has always confused me as a profeminist gay dude. First, women are adults, and babies aren't. So I don't believe any woman born as such. Second, I'm of the tradition that gender is made, with force by "men" against people designated as "not men" or "not manly enough". This means some people get to call themselves men and use entitlements and privileges, as well as many forms of unearned power to enact this reality as an identity against human beings of various genetic, hormonal, biological characteristics. The clusters of characteristics do not "two genders" make. Except by force, and through brainwashing. Mammals may well tend to be two-sexed by nature, with many variations among those two. But "gender"--the social meaning of those variations or lack thereof, is "man-made" much the way race is "white-man-made" with force, by "whites" against people designated as being "not white". Except with gender the violence is far more intimate across the globe, as the oppressors are raised to believe they should be taken care of intimately, throughout their whole lives, from birth to death, by those they oppress.

As long as any patriarchal society exists; as long as male supremacy exists as an acted out ideology, against the minds and bodies and spirits of women and girls, and anyone deemed "feminine"; as long as men rape women: "subject verb object", asC. A. MacKinnon famously wrote; as long as there is sexual slavery in which men steal, buy, rent, and traffick girls and women; as long as prostitution is assumed by men to be "harmless"; as long as battery of women by the men who love them exists; and as long as women love women; especially the latter: as long as "designated female at birth, girl-raised women" love other "designated female at birth, girl-raised women", lesbianism ought to exist. That's my viewpoint and I'm sticking to it. It will obviously have many names in many languages. And how it is expressed will vary culturally. And the white way ought not be "the" way it is expressed or named, but just one of many ways. But it must exist. Lesbian-feminism must exist, at least until patriarchy is long dead with no signs of resurrection. Or until no woman is capable of loving another woman as a full human being.

Posted by Julian Real at 3:18 PM No comments: