Please click on the title below to link back to the source page: 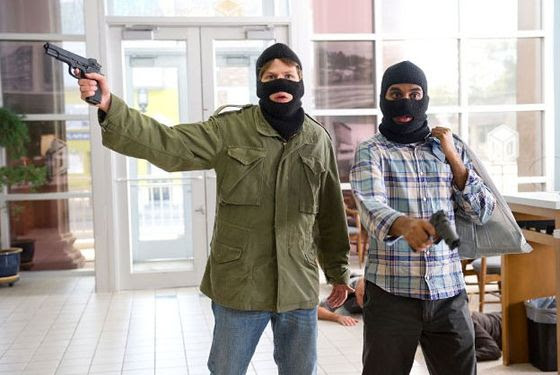 The R-rated comedy 30 Minutes or Less has the careless, amoral vibe of a seventies drive-in chase movie awash in drugs, nudity, and shooting, and without any pesky, PG-13, momentum-killing anxiety about “social consequences.” The makers don’t go as far as they might have — kids, for example, aren’t killed (only traumatized for life). But in spirit, this movie couldn’t be much more ugly. I enjoyed it. It suits the national mood.

The director, Ruben Fleischer, was behind the mysteriously successful Zombieland and is now, having wrung cheap laughs out of the end of civilization, essentially self-lobotomized. This film is better. It has a clever, mean, relentlessly vulgar script by Michael Dilberti. The central relationships are bracingly grotesque, the laughs, such as they are, are proportional to the degree of the characters’ avarice, murderousness, stupidity, and indifference to devastation. Early on, best buddies Jesse Eisenberg, a pizza deliveryman, and Aziz Ansari, an elementary-school teacher, beat each other up and vow never to speak again. Eisenberg turns out to have deflowered Ansari’s sister (Dilshad Vadsaria) while Ansari admits he divulged a secret that ended Eisenberg’s parents’ marriage. Adding to the unpleasantness is that Ansari, an amusing comedian, has no idea how to modulate his performance and shouts all his lines, while Eisenberg, finally freed by last year’s The Social Network from his stammering-sweetie persona, makes a point of staying brusque and irritable.

Danny McBride is the film’s strongest presence, as he often is in comedies that up the macho creepiness quotient to the point where you wonder whether Andrea Dworkin weren’t right about all men being rapists. He plays the unemployed, druggie, relentlessly emasculated son of a retired military officer (Fred Ward) living off lottery winnings. On the advice of a stripper he thinks likes him, McBride decides to kill his father — or, rather, to pay someone to kill his father and force someone else to rob a bank to come up with the $100,000 hit man fee. If that sounds moronically convoluted, it should be said that McBride is the thinker in his social circle. His pal, played by Nick Swardson, is chiefly good at blowing things up and burning things down. Swardson does, however, create the bomb vest that locks onto the delivery guy who has the bad luck to answer the pair’s call for a pizza. And so Eisenberg is forced into robbing a bank to keep from being vaporized.

30 Minutes or Less is paced like a thriller, and it’s impressive how much suspense Fleischer and Dilberti are able to generate given that no one onscreen has any brains.

(Ansari suggests that Eisenberg remove the bomb vest by sawing off his arms, putting them in ice, and having them reattached at the hospital.) Halfway through, Michael Pena shows up as a weirdly effeminate hit man who makes you think better of McBride. But then McBride comes onscreen and you start hoping for Pena to waste him. Then Eisenberg and Ansari blunder into a bank and you think maybe it wouldn’t be so bad if they both got blown up. I think those debt-ceiling negotiations have really done a number on us.

Re: "Danny McBride is the film’s strongest presence, as he often is in comedies that up the macho creepiness quotient to the point where you wonder whether Andrea Dworkin weren’t right about all men being rapists."

Neither Andrea Dworkin nor Catharine MacKinnon ever said, wrote, or otherwise indicated that they believed "all men are rapists" (or that "all sex is rape") and proof of the allegation being erroneous is both in their published work and is also discussed here (it's a lie that began in Playboy magazine to discredit feminist activists):

It's just one of many lies about radical feminists that gets passed around so anti-feminists can think "those women were CRAZY!" I'd surely appreciate it if you didn't climb onto that old band-wagon. It's already quite crowded with men who hate feminists and I don't assume that's the company you keep.