Why Don't They Make My Brown Eyes Blue: The Destructive Power and Coercive Influence of White Standards of Beauty and Humanity 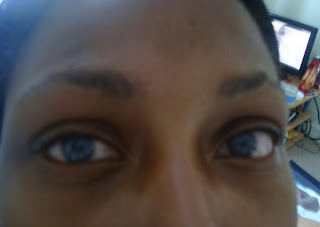 [caption in original article: Sight for sore eyes: Shenise after the operation to insert a coloured lens over the irises - but doctors later had to remove them] 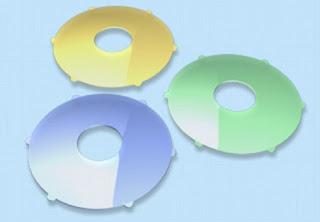 [caption from original article reads: The NewIris lens: 'For consumers who wish to change the colour of their eyes with a natural appearance and without the limitations, risks and annoyances of contact lenses' - according to the company's website.]

I can't help but notice, above, how there are no brown "NewIris" lens options in this promotional image. Now why wouldn't people with blue eyes want to make them brown? Oh, right: because of white "aryan" male supremacy.

Some of the utterly racist, misognyistic, and classist comments aimed at Shenise Farrell:

As a tax payer how much have I had to contribute to this woman's stupidity?


What an idiot! And worse, an idiot who's costing the NHS money because of her vanity.

Note the utter callousness and racist, classist, misogyny directed (above) at this woman in the comments section not fully copied and pasted below. It's so easy to hold those of us who try to assimilate into dominant society responsible for the dominant society's inhumane values and practices. But anyone with any awareness of how oppression works must acknowledge that the inhumanity aimed at Shenise Farrell would better be spent dismantling white heterosexist male supremacy. For without white male supremacy as an overpowering force and influence, the desire to turn brown eyes blue, to bleach hair that is darker than light blond, to enlarge breasts, to "Westernise" eyelids, to narrow, shorten, and straighten noses that don't look Nordic, and obtaining the medical means to do all of the above, would not be possible.

Wealthy white people have all kinds of cosmetic surgery, all the fucking time, and never get the kind of response aimed harshly at Shenise Farrell. Many of her critics are concerned about how much her actions are costing tax-payers. The appropriate answer: not nearly the amount of money tax-payers pay to have white man-dominated societies' police and military forces murder people of color around the world.

The article the assholes above are responding to follows below:

Single mother travelled to Panama for operation to turn brown eyes blue... and was almost blinded

Shenise Farrell, pictured following corrective surgery in the UK, still has brown eyes despite spending £5,000 on an operation to turn them blue

When Shenise Farrell read on the internet about a £5,000 operation which could turn her dark brown eyes light blue, she wasted no time in heading off to Panama.

Less than two weeks later, British surgeons were battling to save her sight.

They had to repair a hole in her iris and remove implants. It is unclear whether she will suffer long-term damage – and her eyes are still brown.

‘It was the biggest mistake I have ever made,’ said the single mother of three from Perivale, West London.

‘To think I could have never been able to see my children again. It was totally reckless of me.’

Miss Farrell is taking a community studies degree at Goldsmiths, University of London in the hope of becoming a social worker.

She is believed to be the first person in the UK to undergo such an operation, which involves inserting a coloured lens inside the eye, over the iris, and is not licensed in Europe.

Miss Farrell called the US number of the New Colour Iris company, linked to a clinic in Panama run by a Dr Delary Kahn.

She was told to undergo five tests with opticians in the UK to check she was suitable and then hand over $3,000 (£1,800) deposit and proof of airfare and hotel.

The opticians advised her not to go ahead with the procedure but she raided her savings and flew to Central America in June, telling family she was off on holiday.

‘I’ve already had breast implants abroad in Bulgaria and had been very happy with that, so it didn’t faze me that I would have to go to Panama,’ she said.

‘The procedure was unpleasant and painful. I screamed out at one point. But it was over within ten minutes and I was taken back to my hotel with just some eye drops and
told to buy my own painkillers.’

For the next eight days, her vision remained blurred, particularly in her right eye. When she arrived back at Heathrow, she had to be helped through the terminal because her sight was so poor.

Four days later, with no improvement and after developing a painful sensitivity to light, she called NHS Direct who advised her to go straight to the Western Eye Hospital in Paddington.

‘She could barely make out the top letter on the eye chart,’ he said. 'We could have registered her blind.

‘There was no question but to remove the implants which in itself was quite a challenging procedure. I would strongly advise people not to undergo this process.’

Although Mr Mearza managed to save her sight, Miss Farrell might develop cataracts in later life and is at increased risk of glaucoma.

A spokesman for New Colour Iris said that while it sympathised with Miss Farrell, it had carried out more than 600 operations since 2002 with only a handful of complaints.