What follows is from Culturite. Please click on the title just below to link back.

Waziyatawin, an incredible Dakota scholar, activist and one of my Indigenous Governance professors, will be speaking at the University of Victoria on Tuesday, November 2, 2010. The talk is being presented as part of the UVic Native Students Union Speaker Series and will be held from 11:30am – 1:30pm in the First Peoples House Ceremonial Hall at UVic. The presentation will be tailored for an Indigenous audience. The event is free and no registration is required.

Waziyatawin’s recent work builds on her own research and writing, as well as existing literature on peak oil and the impending collapse of Western Civilization, as framed by Derrick Jensen (Endgame) and the END:CIV project. 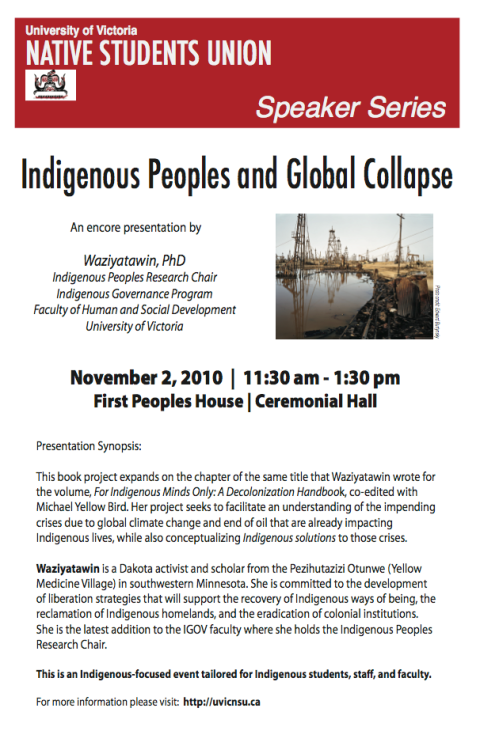 To my Indigenous brothers and sisters: if you haven’t yet had the chance to hear Waziyatawin speak, I urge you to come out and listen. She will rock your world,  shatter your assumptions about peak oil, and compel you to take action to defend yourself, your people, and your homeland!

Indigenous Governance will also be hosting Endgame: An Evening with Derrick Jensen at UVic on November 17th.
Posted by Julian Real at 12:46 AM No comments:

The Most and Least Corrupt Countries in the World... by what standards?

How much you wanna bet that if a bunch of white men are deciding what countries are most corrupt, the ones white men patriarchally, racistly, militarily, and economically destroy will be red while the countries where white men live will be yellow or golden? For the really big version of this map, that has more detail and information, please see *here*.

We can note in the top left corner how "corruption perceptions index measures the perceived levels of public-sector corruption  in 178 countries around the world."

What is clear is that whoever is deciding the criteria for what constitutes "most corrupt" and "least corrupt" has some major biases against what might be termed "global-impact corruption". A definition is posited which disallows factors which would have the U.S. ranked as most corrupt. It goes a bit like this: "We're not talking about corruption in the sense of breaking the law," she said. "We're talking about a sense that the system is corrupted by these practices. There's an integrity deficit."

What if we were going by breaking the law? Breaking international laws of human rights, for example? Breaking the law in terms of starting and continuing illegal, corrupt wars in places like Iraq and Afghanistan, where the U.S. has been militarily ruling for years. Note how Iraq and Afghanistan make the "most corrupt" list but the U.S. is at the other end of the spectrum, in the "least corrupt 25".

What if we were making determinations based on countries that make and reinforce laws that allow corruption to occur but appear to be "free trade"?

What if we were going by breaking our own laws against raping children in our homes, nationally, regionally, and internationally?

Which countries claim that men raping women is a crime and his awful but allow it to flourish and protect rapes that are filmed as "free speech"?

Which countries pride themselves on being anti-racist white practicing white supremacy?

Which countries in the Global North hoard the most wealth and resources, at the expense of the rest of the Global South? Which countries have been committing genocide unabated for the longest periods of time? The U.S. has been at it since before it became an allegedly more perfect union. And it shows no signs of stopping as it strives for even greater "perfection".

What if we were basing this on this criterium: which country most supports the most wage slavery and sexual slavery while also having the material and military means to stop it?

Which country claims to be most egalitarian, most fair, most just, most free, while participating in activities that are torture, criminal, barbaric, genocidal, and gynocidal?

Which countries are most responsible for working at polluting and killing the Earth. Where's England on the list with their BP corruption? Where's does the U.S. with ExxonMobil, Halliburton, and many other evil-doing corporations rank?

Which countries funnel the most armaments to poorer countries so that poor people can kill each other in ways that would be utterly impossible were it not for those weapons of mass destruction?

The countries that are most corrupt according to the above and other measurable atrocities would be some of these golden yellow areas: the U.S. and Western Europe. There are countries where rape is endemic in ways it is not in the U.S., but the U.S. claims to respect women and calls itself post-feminist, while making rape inevitable, and while it and European countries socially, politically, economically, and naturally destablising every country where rape is at alarmingly atrocious levels.

The map above and the rest below are from Transparency International. Please click on the title below to link back.


Most (And Least) Corrupt Countries

At the bottom of the list, the most corrupt, are countries hit by warfare and strife, unsurprisingly. Somalia is the worst, followed by Burma, then Afghanistan and Iraq. The least corrupt countires are Denmark, New Zealand, and Singapore, unchanged from last year.

In a press release, the organization said, “Notable among decliners are some of the countries most affected by a financial crisis precipitated by transparency and integrity deficits.” Greece fell from 71 to 78 and Italy from 63 to 67. The US also fell, from the 19th spot to the 22nd. From Reuters:


Nancy Boswell, president of TI in the United States, said lending practices in the subprime crisis, the disclosure of Bernard Madoff's Ponzi scheme and rows over political funding had all rattled public faith about prevailing ethics in America.

"We're not talking about corruption in the sense of breaking the law," she said. "We're talking about a sense that the system is corrupted by these practices. There's an integrity deficit."

Various financial scandals at state and city level had encouraged the impression that the regulatory oversight was weak and that influence could be bought, she added.

Corruption is something that just becomes ingrained in a society and once it's there it's hard to stop. It becomes a habit of mind, a sense that this is simply how things done. An official pamphlet given to Iraqi refugees who are heading to the States advises them not to bribe police officers. After working in Iraq for years I came home from one trip and had to go to the DMV. I'm waiting in line, as one does, and all I can think is, "Who can I bribe to make this go away?" To address corruption you have to change a society's whole way of thinking about what the cultural norms are, which is not easy, to say the least.
Posted by Julian Real at 12:23 AM 6 comments: