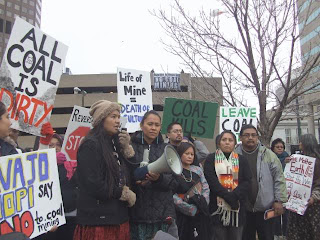 “Women have to deal with water issues because they’re the ones that wash the clothes. They take sick kids to the hospital,” said Diana Bustamante, executive director of Colonias Development Council in Las Cruces, N.M., adding that women are leading the charge on environmental issues in New Mexico.

I am hoping that the following post [from here] further demonstrates how complicated the lives are of women of color, in this case U.S. Southwestern American Indian women. What the news story below shows is how unless women of color are in charge of all the factors that impact their lives, including Tribal Councils, their lives will remain in jeopardy. Due not to biology, but rather to social position and role, women know far more about what is safe and unsafe for their people. At issue here, in part, is male Tribal leaders' wish to preserve coal manufacturing for economic survival, and non-Native environmental groups working to stop them from doing so, with concern for land outweighing concern for Native people, which is generally the case with white-dominated environmental groups. Lost in this battle are the women's lives most impacted by these men fighting one another.

“A man from the west will fight over three things: water, women and gold, and usually in that order.” -- former U.S. Senator Barry Goldwater (R-Ariz.)

(Ironically or not, Barry Goldwater was a collector of Hopi qatsina (or the Anglicised kachina) dolls. He was also a white conservative libertarian who supported "gays in the military", hated Nixon and was against the Religious Right's attempt to take over the Republican Party. He was also staunchly anti-communist and pro-nuclear weapons as a "defense" against the Soviets. He was knows as a "swinger", and Lorde knows what that term is code for in U.S. white heteromale supremacist society in the 20th century, ECD.)

PHOENIX, Ariz. -- One week after the Hopi Tribal Council officially banned the Sierra Club and other environmental groups from their land, Native American journalists held a candid discussion about the controversy and how media could better cover environmental issues in their communities.

“As a young person, I understand that we’re in this position of basically being economically dependent on our own cultural destruction,” said Jihan Gearon, an organizer with the Indigenous Environmental Network in Flagstaff, Ariz. “At the same time, I’m very upset that our tribal governments are still stuck in this position of thinking that’s the only thing that we could do.”

The Hopi Tribal Council passed a unanimous resolution on Sept. 28, arguing that environmental groups were depriving the tribe of coal revenues it needs to secure the survival of the Hopi culture. They declared that the Sierra Club and several other groups were no longer welcome on Hopi land. Navajo Nation President Joe Shirley, Jr., announced that he stood with the Hopi Nation, and called environmental activists “among the greatest threat to tribal sovereignty.”

“I don’t even think your average [Navajo] person agrees with what [President Shirley] said,” Gearon said. “So, in some ways I feel that this statement that he released is a good thing because it’s showing people the true colors and the true intentions of what our tribal governments are trying to do.”

The conversation was part of a meeting that brought environmental groups together with journalists from ethnic news media across the Southwest to discuss how to make green issues relevant to an increasingly diverse society. The summit, organized by New America Media in partnership with the International Center for Journalists and Arizona State University’s Cronkite School of Journalism, and sponsored by the William & Flora Hewlett Foundation, took place in Phoenix, which earlier this year announced its plans to become the first carbon-neutral city in the country.

“Sixty percent of New Mexico are people of color, and we’re lovers, not fighters, so that’s going to go up,” said Arturo Sandoval, executive director of the non-profit Center of Southwest Culture. But, he said, despite deep connections to place – as heard, for example, in Norteña music, the Mexican version of country music, popular in Northern Mexico and the U.S. Southwest -- this largely has not translated to environmental activism.

“It’s difficult to focus on the environment while our people are living in fear of the political situation,” said Lizeth Félix of La Prensa Hispana newspaper in Phoenix. “Their priority is immigration.”

Yet in many cases, these communities are the ones most affected by environmental problems, said El Seminario reporter Beatriz Liscano. The high incidence of cancer in the Navajo Nation has been linked to uranium mining in the 1950s and 1960s. Latinos in the Mountain View neighborhood of Albuquerque, N.M., where water has been found to be contaminated with nitrate and air polluted with mercury, suffer from cancer, asthma and skin problems, according to Liscano.

“We have a lot of environmental racism in our state,” said Arizona State Rep. Cloves Campbell, Jr., who is also co-publisher of the Arizona Informant. Campbell noted that in the 1940s and 1950s, many African-American families moved to the community of Mobile, Ariz. “It was the only place where African Americans could purchase property and live,” Campbell said, “and Arizona decided to put a dump there. This dump site,” he said, “affects the health of the residents -- and we want this kind of issue to be at the forefront of Arizona [politics].”

Samuel Murillo, editor of La Voz newspaper in Phoenix, has personally experienced some of the health effects of pollution. “I was diagnosed with valley fever, I have asthma and my son has allergies,” said Murillo.

For Native Americans, air, water and land issues are linked to identity. “When you talk about the environment, you’re talking about who we are as native people,” said Tom Arviso, editor of the Navajo Times.

Mihio Manus, editor of the Gila River Indian Newspaper in Sacaton, Ariz., said that his community -- known as the “river people” – had to completely change their way of life when the Gila River was dammed up and diverted. They developed one of the highest rates of Type 2 diabetes in the nation, which Manus believes was a result of the loss of their only source of water. They have since won a legal settlement allowing them access to 650,000 acres of water and are now working to extend a canal system and bring water back to the community.

Water could be the biggest news story in the Southwest that isn’t being told, said experts.

“Water is the one thing that binds us all,” said V.B. Price, an author and environmental columnist for the New Mexico Independent. “We just had an election in Albuquerque in which the three mayoral candidates never mentioned water once.” “California, Nevada, Utah, New Mexico and Arizona are in trouble,” he added. “We are in a long, protracted drought. And if global warming is an actual thing, this drought will not go away.” Cities will have to be retrofitted, said Price, and if these changes are not made fast enough, the federal government will inevitably step in to enforce conservation, telling people what they can and can’t use.

Journalists covering immigrant communities spoke passionately about the water crises facing their home countries. Tony Kao, manager of the Arizona Chinese News and Arizona Chinese-American News in Phoenix, said he was deeply concerned that “Northern China is running out of water.”

Ethnic communities bring their own traditions of environmentalism -- from immigrants who grew up with limited resources and learned to conserve water and energy, to Native Americans who grew up listening to their elders tell stories about Mother Earth and Father Sky.

But the stories really succeed when they connect to people’s daily lives.

Much of this reporting targets mothers, who often make the environmental choices and see the health consequences for their families.

“Women have to deal with water issues because they’re the ones that wash the clothes. They take sick kids to the hospital,” said Diana Bustamante, executive director of Colonias Development Council in Las Cruces, N.M., adding that women are leading the charge on environmental issues in New Mexico.

Nadine Padilla, a Navajo and Pueblo Indian from Bluewater Lake, N.M., said that young people are also a driving force. “It has to be an intergenerational movement,” said Padilla, who serves as the coordinator for the Multicultural Alliance for a Safe Environment (MASE) in Albuquerque.

Marwan Ahmed, publisher of the Muslim Voice, which serves the 60,000 Arab Americans and 100,000 Muslims in the Phoenix area, said that in his community, the younger generation is also more interested in environmental issues.

In the current controversy between the Hopi and Navajo nations and environmental groups, native organizers said youth could be the key.

Wahleah Johns, co-director of Black Mesa Water Coalition, sees the solution as one that is both environmentally sustainable and economically beneficial to the tribe: In what she describes as a “youth-led” movement, Johns helped create the Navajo Green Economy Coalition in 2008 to help bring green jobs to the Navajo Nation.

Others hope the dispute will open up a debate over the relationship between the environmental movement and their communities.

Gearon of the Indigenous Environmental Network said the statement by Hopi and Navajo leaders “called out the big enviros.” Although many indigenous people support local chapters of groups like the Sierra Club, she said, at the national level, “it’s very hard to get us on the same page.”

For example, she said, many native people don’t support the American Clean Energy and Security Act because it “gives billions of dollars to coal companies” and “offsets our emissions here by kicking indigenous people out of their forests in Brazil, and planting palm oil and pine tree and eucalyptus plantations so that we can have bio-fuel cars here.”

Journalists left the summit with a list of story ideas about how to cover what New America Media director Sandy Close called “the biggest news story in the Southwest: water, soil, energy, climate change.”

The challenge, said Loris Ann Taylor, executive producer of Native Public Media and co-founder of the Hopi Foundation, will be for news media to stay relevant to an increasingly diverse population in the Southwest. With the “browning of America,” the audience is changing, but many of the issues of the region are the same, she said, citing a quote by former U.S. Senator Barry Goldwater, R-Ariz.: “A man from the west will fight over three things: water, women and gold, and usually in that order.”

END OF POST.
Posted by Julian Real at 2:21 PM No comments: