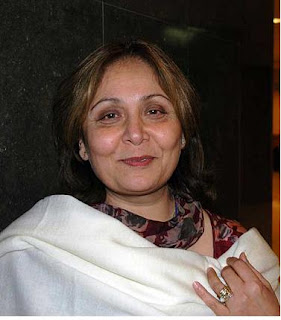 [photo of Dr. Shaheen Sardar Ali is from here. This image also appears on a site linked to in this post]

Just below is a website created to celebrate the courage and lives of great Pashtun women who have, each in their own ways, fought for human rights. These are women who have fought hard to have their voices heard. Some of these women continue fighting for dignity, safety, and liberation. Tragically, not all of them have survived the battle.

[24 March 2011 UPDATE: I'm taking this sentence out. It appeared at the end of the paragraph above. For the reason why, please see Serenity's comment below. Thank you Serenity!! This is the sentence: And men's war against women goes on uninterrupted by other men.]

I posted in July about one of the women, Malalai Joya, whose bravery has been recognised at this website (an album).

Here I will copy and paste information about the courageous work of another great woman, also pictured in the album:

Dr. Shaheen Sardar Ali author of the book "Gender and Human Rights in Islam and International Law: Equal before Allah, Unequal before Man" is a very accomplished woman who has through her distinguished career gained international respect and admiration. She also holds the distinction of being the first female minister from the conservative NWFP when she served as Minister of Health, Population Welfare and Women's Development in 2001, which makes her one of a handful of high-ranking female officeholders in Pakistan.

Contributing on a regular basis to radio and television programs and facilitating discussions as commentator/discussant on current affairs/Islamic Law/Muslim World/Pakistan/South Asia/Human Rights she has become the face and voice of not only the Pukhtun woman but of also the Muslim woman.

In 1974 a young, pretty Pukhtun woman made headlines when she became the first female gold medalist at the University of Peshawar when she did her BA with distinction. This is the woman who not only my mother named me after (because I was born the same day as the headlines), but many other mothers named their daughters too. There were many girls named Shaheen in my class. Dr Ali went to on to graduate from Law school in 1976 and was not only awarded another gold medal but also received the prestigious Presidential Award for outstanding performance. In 1985 she received another gold medal for her Masters in Political Science from the University of Peshawar, Pakistan.

Dr Ali went on to earn her PhD in1998 at the University of Hull, England where she had also earned her LLM in 1991 with distinction. In 1993, she earned an advanced Diploma in Human Rights at the Raoul Wallenberg Institute of Human Rights and Humanitarian Law, University of Lund, Sweden.

Due to world wide admiration for her work in gender equality and human rights, she was awarded Honorable mention in the UNESCO Prize for development of the teaching of Human Rights in 1992. She has also served as the Chair of National Commission on the Status of Women of Pakistan.

Dr Ali has been a consultant for a range of international bodies, including DFID, NORAD, UNICEF, UNIFEM, to name a few. Being a member of the British Council Task Force on Gender and Development and she has served on the National Commission of Inquiry on Women as well as the Prime Minister's Consultative Committee on Women in Pakistan. She is also one of the founding members and coordinator of the South Asian Research network on Gender, Law and Governance (SARN). She is also the founder and Core Group Member of the Human Rights Study Centre, Faculty of Law, University of Peshawar, Pakistan established in collaboration with NORAD and the Institute of Women’s Law, University of Oslo, Norway.

Professor Ali’s areas of teaching include Islamic Law, Islamic Jurisprudence, Comparative Perspectives on Gender, Law and Development, International Law of Human Rights, and Constitutional Theory. She has authored five books and more than two dozen articles as well as fifteen chapters in books. Topics include human rights, family law, alternative dispute resolution, women’s rights, and ethnic minority issues in Pakistan, and gender, law and development.
(Source for the information above can be found here)