Shalom and best wishes to Alysa Stanton as she begins her rabbinic work in Greenville, North Carolina this August 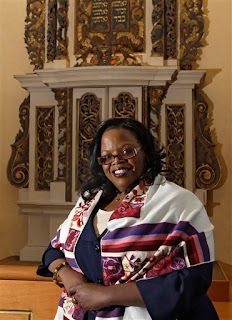 [Alysa Stanton poses in front of an ark in the synagogue at Hebrew Union College, Thursday, May 21, 2009, in Cincinnati. Stanton is to be ordained June 6 as mainstream Judaism's first black woman rabbi. She will become the rabbi at Congregation Bayt Shalom in Greenville, N.C., on Aug. 1. (AP Photo/Al Behrman)]

What follows is from this webpage at The Huffington Post, which is linked to here.

CINCINNATI — Alysa Stanton began quenching her spiritual thirst early, discovering Judaism after a search that began at age 9 and worried her mother only when a man called the house one night asking for her youngest child.

Turns out he was a priest Stanton had contacted to ask questions about Catholicism, part of a road that took her through charismatic Christian and Eastern faiths and finally to a position that experts say makes her mainstream Judaism's first ordained black female rabbi.

"I was considered an 'old soul' even when I was young, because my family believed I had a maturity beyond my years," said Stanton, a Cleveland native who remembers being a bit indignant that her surprised mother was questioning the unknown man.

American Judaism will mark the milestone June 6, when Stanton is ordained in preparation for leading a predominantly white congregation of about 60 families in Greenville, N.C.

"It has been a journey with many twists and turns along the way, but Judaism is the language of my soul, and it's what resonates with me," the 45-year-old Stanton said.

Yet Stanton didn't always feel accepted by Jewish congregations or some friends when she converted during her 20s.

"I felt ostracized at times, but I had to learn who I was, what my values were and move forward."

Her mother, Anne Harrison, instilled in her four children the importance of having faith and a spiritual path.

"She didn't care what that was, as long as it was God-based and that we knew there was something greater than ourselves out there," Stanton said.

Her mother wasn't surprised when she decided to become a rabbi.

"Alysa has always reached for the top," said Harrison, 78, of Lakewood, Colo., where the family moved when Stanton was 11.

Stanton, who is divorced and has a 14-year-old daughter she adopted as a 1-year-old, is fairly soft-spoken with a warm, engaging smile and a steady, confident gaze. Congregation Bayt Shalom in North Carolina eagerly awaits her arrival.

"We needed someone who is a magnet, who radiates warmth," said member Carol Ogus Woodruff, 54. "She brings a scholarly awareness but also has great relationships with kids and can talk to different kinds of people."

The 9-year-old Stanton started her religious search while living in a Jewish neighborhood in Cleveland Heights. The following year, an uncle gave her a Hebrew grammar book that she still has and picks up from time to time.

"I think some things are just destined," she said.

As a student at Colorado State University in Fort Collins, Stanton drove more than 140 miles a week to study with a rabbi in Denver for her conversion. She later moved to Denver, becoming very involved in the Jewish community.

She also learned to chant the Torah, the five books of Moses.

"That opened something in the recesses of my being, and I had a hunger and a thirst to learn more," Stanton said.

Stanton, who worked as a licensed psychotherapist specializing in grief, loss and trauma, thought she was too old and too poor to start rabbinical studies at age 38. But she believed it was meant to be.

She enrolled in 2002 at the Cincinnati campus of Hebrew Union College-Jewish Institute of Religion, the nation's oldest institution for training rabbis, cantors and educators of Reform Judaism.

She believes her future is in God's hands but isn't satisfied with the world as it is, said Rabbi Kenneth Ehrlich, campus dean.

"She deeply believes that God calls upon her _ and upon all of us _ to make this a better world, a place that God wants it to be," Ehrlich said, referring to Stanton's work with a hospice and other community activities.

Her ordination is a politically significant and healthy step in the next stage of Judaism's development in America, said Lewis Gordon, founder of the Institute of Afro-Jewish Studies at Temple University in Philadelphia. Many believe it could draw more women and blacks to the rabbinate and other leadership roles.

Stanton said she is happy to be a face that reflects diversity.

"I want our synagogue to be a place of hope, healing and inclusion," she said. "I want it to be an oasis for anyone seeking spiritual refreshment."