White people are STILL "discovering" people of color's neighborhoods: and guess who wins in the end? 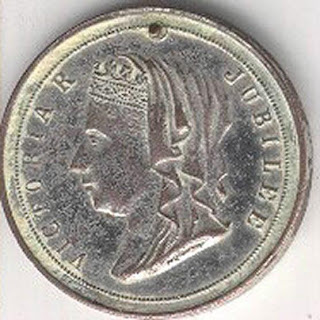 [image, the rear end of an 1887 medallion found during a rubbish tip excavation in South Australia, is from here]

Let's consider the ways white folks with any middle class or upper class values like me, like any whites folks with any chosen (not forced) states of "mobility", like me, continue to act out what seems to be a viciously political and genocidal cultural imperative: to move into and take over pieces of land upon which people of color live. From the founding of the US, and back to the many imperial conquests rooted in Europe, then forward to the influx of mass weaponry into nations and regions where people of color live, to gentrification, we see this pattern: whites believing and acting as if we have a right to various forms of eminent domain. We have a right to murder, or displace people of color from their homes and homelands.

We have this right (or is it a wrong?) because of what, exactly? The structural and institutional power and support to do just what we want to do, much to the demise of people of color across the globe, and also to poor white people too.

All of this is done, here and there, to make the murder of the people who are not white more efficient, to perpetrate new and old genocides with direct ties to white-dominated countries without owning that this is even happening, to gross cultural appropriation/exploitation/thievery, such as stealing American Indian and First Nation traditions and practices, as well as objects, and those from Asia and Sub-Saharan Africa, and South America, to adorn our homes, because we're so "multi-cultural".

The post linked to below calls some of this shit out. And may it be called out again and again, until "genocidally mobile" white folks go back where we came from.

I just read this discussion over at the blog, Having Read The Fine Print. It is what inspired me to take on this subject, yet again, and not for the last time. Here's the link: http://guyaneseterror.blogspot.com/2009/05/white-people-like-to-discover-things.html
END OF POST.
Posted by Julian Real at 12:35 PM No comments: