On prostitution, poverty, prison, and liberation: an argument for collective action, not arguing against ourselves 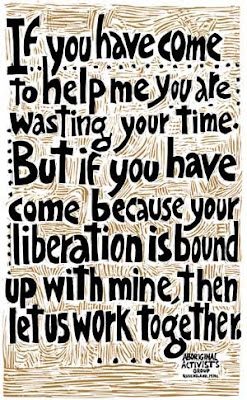 [image of liberation poster is from here]

I just posted the following comment, *here*, at a blog focused on ending male violence. The discussion thread, posted, includes a woman who identifies as a sex worker, and other folks who do not. Moses, who is the moderator of that blog, does a fine job of keeping it humane. Thanks, Moses.  :)

I have never really understood the seeming tension between women who willingly work in systems of prostitution and other sexism industries and women fighting to end male supremacy.

In what sense aren't both groups wanting the same things: an end to violence against women?

I see some women who define as sex workers arguing against feminist activists who want pimps and procurers held accountable for what they do that harms human beings, on the class level and on the individual level. Men, predominantly and overwhelmingly, desire and enforce oppression and subordination of some human beings to others, cruelly and without concern for the effect of their actions on women as a class.

All the sex worker arguments above seem to me to be individualistic and anecdotal, which tells me we are in basic agreement.

Does anyone disagree with this:
Those individuals and groups structurally positioned to be most in charge of larger systems of sexist/racist/classist exploitation and violence are dreadful, require incest, rape, trafficking, and sexual slavery, poverty, and homelessness to exist; they do kill women and make the process of destruction appear to be sexy, and they make it profitable, primarily for corporate pimps; those who most profit don't give a damn about women's human rights and well-being.

If we agree on that, why can't we, collectively, focus on stopping the abusive pimps and procurers from being abusive, and stop them by any means necessary?

If capitalism requires poverty to exist, and it does, that doesn't mean trying to find a decent paying job is a bad thing. It doesn't mean capitalism is a good thing, however, and it ought to mean fighting to end poverty and radically transforming capitalism into a political and economic reality that is ecologically sustainable and non-oppressive.

If patriarchy requires rape, battery, incest, and gross sexist exploitation and abuse to function, and it does, then working to make ends meet however one can is not a bad thing. And patriarchy that we must survive in it doesn't render patriarchy a good thing. The call is there to eradicate all forms of violence against women and radically transform patriarchy into something that isn't patriarchal, that is ecologically sustainable and non-oppressive. That's the profeminist/prowomanist/pro-woman viewpoint I hold to.

Speaking only for myself, I have no problem with any group of people fighting for better living conditions. Those battles will, necessarily, take place inside larger systems of inhumane destruction and will, in some ways, reinforce those systems. So I can't imagine organising against women who identify as sex workers who work inside systems of prostitution and other sexism industries.

And I don't support anyone speaking about systems that REQUIRE, PROMOTE, DEMAND, AND ENFORCE patriarchal, capitalist, white supremacist, genocidal, gynocidal, ecocidal child-hating atrocities as "places where good things can happen". Good things happen anywhere. So that's not telling me anything that isn't self-evident. But the fact that a very few people do figure out how to be spiritually liberated while in prison isn't an argument for imprisoning people or for maintaining prison systems. We don't need prison to be spiritually liberated.

To me, such individualistic-only arguments show gross and callous disregard for the lives of the most vulnerable, the poorest, the most exploited, and the least privileged.

Systems that destroy people cannot, in this view, be deemed or determined to be fine, good, just, or humane. They must be radically transformed or dismantled, as long as they are founded on principles and practices of social hierarchy, exploitation, and violence.

And I live in a country that calls all of that horrifying abuse (including poverty, rape, and racism) natural, inevitable, god-willed, and good. And that's f*cked up, to say the least.
Posted by Julian Real at 12:22 PM 4 comments:

More Women Speaking Out on Haiti and Humanity, the links below

[image of map of Haiti and surrounding countries is from here]

First, this, from bLaKtivist's blog and website, her most excellent piece titled:

Second, this piece, a first-person story from Haiti by Sasha Kramer, posted at Alice Walker's blog, which is also linked to on the right side:


“Re: Haiti: Passing on to you something that may help lift us from this sorrow.”

Thank you, Krys @ bLaKtivist, Alice Walker, and Sasha Kramer, for giving more resonance and richness to the voices called Humanity, as you each uniquely embody and express Her. -- Julian Real
Posted by Julian Real at 1:27 AM 2 comments: