In October 2007 people all over the United States gathered physically and in spirit to speak out against violence against women of color. The violence that lead us to action was: 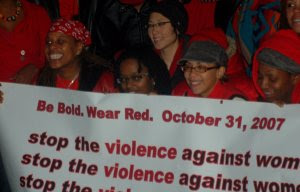 Organizing on October 2007
The title of the campaign was Be Bold Be Red Be Brave: Ending Violence against Women of Color. Some of us wore red all day and explained that we were reclaiming and reframing our bodies as a challenge to the widespread acceptance of violence against women of color. Some of us wrote powerful essays about why we were wearing red and posted them on the internet. Some of us gathered with bold and like-minded folks and took pictures, shared poetry and expressed solidarity.

Then on the first anniversary of the Be Bold Be Red Campaign, October 30, 2008, we once again invited people to make bold stances against the violence enacted on women and girls of color in our society visible.

In D.C., Chicago, Durham, Atlanta and Detroit women of color gathered to renew their commitment to creating a world free from racialized and gendered violence through the use of Cyberquilting which uses video conferencing technologies to connect all of these gatherings in real time. To learn more about Cyberquilting, which is a woman of color led project to stitch movements together using new web technologies and old traditions of love and nurturing, visit www.cyberquilt.wordpress.com.


And now we are launching a new cyber campaign entitled, “Where is Aniysah?”