A Cinematic Litmus AND Rorschach Test: what happens when we move beyond "the single story" of oppressed people? How do oppressors understand the film, Precious, and what are the concerns of the oppressed?

(Source for all that is from the New York Times online, including image and article: here) 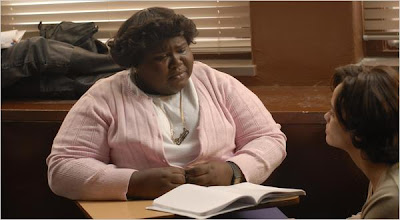 NYT caption: “Precious,” about a disadvantaged young woman played by Gabourey Sidibe, left, has sparked controversy over its meaning.

To me, the NYT and other U.S. white family-owned and corporation-owned media often don't "get it" when stories are told that are not supposed to be told in the United Rapes of Amerikkka. And so people used to being bombarded by dominant media don't know how to interpret the meaning of such films and other creative projects. Whites don't know what to do humanely with images and stories of Black people and other POC that don't match up with their stereotypes--or with those that do. And men don't quite know what to do, humanely, with portraits of women and girls that are or are not in sync with their stereotypes. Finding the humanity in any and every person is not a struggle many whites or men are willing to engage in.

In between and beyond the realms of WHM social conservatism and WHM political liberalism there is a book, Push, by Sapphire, and now there is this film based on her book. Reporter/writer for the New York Times, Felicia R. Lee unpacks some of the unrest surrounding this film, including by interviewing Latoya @ Racialicious!! (Congratulations, Latoya! Finally, a voice of reason and insight in the dominant media!)

Please go listen to and watch this video about "The Danger of The Single Story" if you haven't already heard Chimamanda Ngozi Adichie's excellent talk, which helps make sense of this NYT piece.


To Blacks, Precious Is ‘Demeaned’ or ‘Angelic’

A reinforcement of noxious stereotypes or a realistic and therapeutic portrayal of a black family in America?

“Precious: Based on the Novel ‘Push’ by Sapphire,” the new film about an obese, poor, illiterate, young black woman who is sexually and emotionally abused, has sparked this heartfelt and at times heated debate about its meaning in the two weeks since its limited release.

Now, as it opens nationwide in 100 markets this weekend, the conversation about which black stories are told, and how, is bound to intensify, thanks to post-screening discussion groups; the cultural influence of two of the movie’s executive producers, Oprah Winfrey and Tyler Perry; and the Oscar buzz the critically acclaimed film has already begun generating.

“In some ways, it’s ‘The Color Purple’ all over again, with people writing and talking about what this film represents,” said Mark Anthony Neal, a professor who teaches black popular culture at Duke University. He was referring to the 1985 film based on the novel by Alice Walker, which was directed by Steven Spielberg and starred Ms. Winfrey.

A father repeatedly rapes and impregnates his daughter in “The Color Purple” (as does the father in “Precious”), enraging some critics (mostly men) who asserted that the book and the film treated black men harshly. “Precious” has avoided that kind of backlash, but “people are suspicious of narratives that don’t put us in the best light,” Professor Neal said. The roots of that suspicion, he said, can be found in a long history of negative images in popular culture that helped keep black people in their place by reinforcing the notion of their inferiority.

Professor Neal was among dozens of black people interviewed about their perspectives on “Precious.” Perhaps the most provocative salvo against the movie was fired by Armond White, the chief film critic of The New York Press and the chairman of the New York Film Critics Circle.

“Not since ‘The Birth of a Nation’ has a mainstream movie demeaned the idea of black American life as much as ‘Precious,’ ” Mr. White wrote in his review. “Full of brazenly racist clichés (Precious steals and eats an entire bucket of fried chicken), it is a sociological horror show.”

“Black pathology sells,” Mr. White said in an interview. “It’s an over-the-top political fantasy that works only because it demeans blacks, women and poor people.”

Mainstream news media and serious critics ignored recent black-theme films like “Cadillac Records” and “Akeelah and the Bee” because they were not negative enough, he added.

But Latoya Peterson, the editor of Racialicious.com, a blog about the intersection of race and popular culture, said Mr. White was off base.

“His review buys into the narrative that there can only be one acceptable presentation of black life,” Ms. Peterson said. “He’s flattening the black experience, and in that way, he denies our humanity.”

Luvon Roberson, a public relations specialist in Manhattan, said that some of her friends had told her that “Precious” was a cascade of stereotypes, but that she found it a “deeply moving” way to show the beauty and innocence of a poor, fat, dark-skinned woman.

“At the end of the film, Precious looked angelic to me,” Ms. Roberson said.

Aymar Jean Christian, a doctoral student in communications at the University of Pennsylvania, said he found “Precious” brilliant and added, “In some ways, the debate’s not about the movie, it’s about the idea of the movie,” and black concerns about representation.

On his blog, Televisual (at blog.ajchristian.org), he wrote that Precious was “by far the scariest movie for anyone invested in having only ‘good’ representations of black people (‘The Cosby Show!’) in film and TV.”

In that case, “Precious” need not apply. Set in Harlem in the late 1980s, the movie focuses on Claireece Jones, a teenager known as Precious, who is sexually and emotionally abused by her enraged, foul-mouthed mother, Mary (played by the actor and comedian Mo’Nique). They rely on welfare; Precious is H.I.V.-positive; and the first of her two children (both by her father) has Down’s syndrome. Precious fantasizes about having a light-skinned boyfriend and about herself as a thin, white girl.

Joe Drake, president of the film division at Lionsgate, the movie’s distributor, sidestepped a response to the more negative charges about the movie.

“Precious has become imperative viewing and entered the cultural conversation in an organic, impassioned way,” Mr. Drake wrote in an e-mail message. “We are proud to be a part of this phenomenon.”

Sapphire, the author of “Push,” said it was too late in the day to worry that the film’s themes and images were somehow stigmatizing or inauthentic.

“With Michelle, Sasha and Malia and Obama in the White House and in the post-‘Cosby Show’ era, people can’t say these are the only images out there,” Sapphire said. “Black people are able to say ‘Precious’ represents some of our children, but some of our children go to Yale.”

“Child abuse is not black,” she added. “What do you call the man in Austria who imprisoned his daughter for years?”

She defended her title character as a positive “Oliver Twist-like” figure, who grew out of the stories of the young people she met in New York in the late 1980s, when crack and AIDS emerged.

“Push,” which was controversial when it was published in 1996, is also back at the top of best-seller lists.

“Precious” puts a much-needed spotlight on the underclass, said Nathan McCall, a novelist and former newspaper reporter who teaches a course on the history of African-American images at Emory University. But, he added, Lee Daniels, the film’s director, could have avoided some stereotypes by not making light-complexioned actors the good guys or showing Precious eating a bucket of chicken, he said.

Posted by Julian Real at 2:57 PM No comments:

Will Phillips, 10-Year-Old White non-Gay U.S. Southern Boy, Won't Pledge Allegiance To A Flag or a Country that Discriminates Against Lesbians and Gays--a Country that also Remains profoundly Racist and Sexist

Will Phillips appeared on CNN Monday morning with his father, Jay, to discuss his refusal to say the pledge of allegiance.


Hurray for this child!!!! THANK YOU, Will Phillips!!

While I believe heterosexual marriage ought to be revoked in this country, I support many other people who have other agendas. We must note that Will Phillips DOES mention lesbians as well as gay men, and that he does also take issue with the continuing racism and sexism in this country. Brave child. My prayers are with you to be safe from all bigoted bullies and others who will disrespect your stance. Stay strong!!!

(Sorry, atheistmedia.com, but I am praying for him. And thanks so much for making this available. And my understanding of G-d bears no resemblance to the corrupt capitalist white straight male gods worshipped by dominant U.S. heteromale supremacist Amerikkkans.)
Posted by Julian Real at 1:58 PM No comments:

Yes, White Jews can certainly be anti-Black racists (in the U.S. and in Israel), but these two stories are a bit more complex 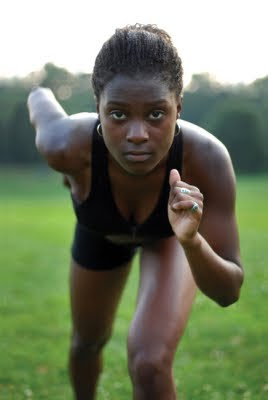 [this is an image of the main character, Avery, in an excellent documentary called Off and Running, and was found here]

GREAT discussion over at Racialicious about a non-Jewish Jamaican woman who has come to the U.S. and works for a white U.S. Jewish woman with an adopted Black son (he's described as from an African country, and I'll assume that means "sub-Saharan" and that he's Black). That discussion is like model stuff in terms of engagement and respect among the contributors. Wow. Wonderful to see and read. Gives me hope for the blogosphere, not that there's only one way to engage, but... really wonderful levels of insight and sharing. Really feels like "caring community"! The real story discussed at Racialicious should not be confused at all with the story in the documentary linked to below, which these first two images are from.

This is a picture of Avery with the rest of her family: 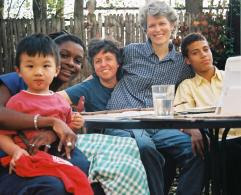 I posted a comment with these two links:
-- one to an excellent documentary called Off and Running
and
-- one to a classic U.S. essay by James Baldwin, which can be found and read here.

The film is a must see documentary, imo, and the essay is a classic. (Yes, he does assume "all the Jews are white" but that was his experience.) I think James Baldwin is so beautiful, had one of the best minds of the 20th Century, and I wish I could sit down with him and talk for hours. He, Harriet Tubman, Audre Lorde, and Andrea Dworkin. But if I had to pick one man from U.S. history, JB all the way! 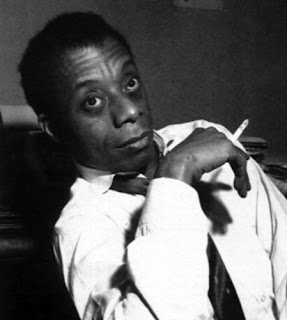 [image of James Baldwin is from here]