The Good Ol' U.S.A. and its Very Ugly ties to Nazi Germany: from cars to coffee makers to hiding Nazis and turning away Jews escaping Germany


CBS News has a story to tell. Above in a video news clip they tell it. What it tells us is that the U.S. has never been what it proclaims itself to be or what its corporate media says it is--with exceptions sometimes noted: a land of the free and the home of the brave. What it was and remains, is a land of the genocidal opportunists, and a home for them too.

What's missing from the discussion above are some fairly significant details:

The U.S. ties to Nazi Germany are far deeper than the video report indicates. U.S. companies did business with Nazi Germany. Ford, the guy behind the car industry, was a Nazi sympathiser. Volkswagen and Krupp, among others, were Nazi genocide-assisting businesses. that the U.S. has always been pro-genocide, having committed the one that is, in fact, the largest ever in recorded human history, as the U.S. settlers and government have slaughtered approximately ten times the number of Jews killed in Nazi Germany. It distresses me whenever a white Jew speaks of the HaShoah as "the worst" one, because it shows how completely "forgotten" the genocide is, of American Indians and the rest of the First People and Nations of North America. That the U.S. has supported covert and overt genocides across the globe, continuing to do so to this day, including against American Indians!

A well-known anti-semite, Henry Ford, published anti-Jewish slanders and was awarded the highest medal Hitler could award a foreigner (The Grand Cross of the German Eagle). Ford was even named in Hitler's auto-biography, Mein Kampf, as the only man in America who was fully independent from Jewish control.
A US Army report shows Ford, the company, as an enthusiastic supporter of Hitler's regime whose German division made huge profits in becoming an "arsenal of Nazism."
Like GM, Ford claims to have lost control of its German division, Fordwerke, before it started using forced labor. However, according to a well-researched and damning report in The Nation, "Robert Schmidt, the man appointed to run Ford Werke in 1939, states that the company used forced laborers even before the Nazis put the plant in trusteeship." Ford also placed a rabid Nazi as head of Fordwerke, and US Government documents show that Ford was in constant communication with the Ford plants in Nazi-occupied Vichy France.
From a US Forces report on Fordwerke: "Of the 350,000 trucks which the motorized German army possessed in 1942, 100,000 to 120,000 were Ford-built. Of the Wehrmacht's total of 650,000 mobile units of all kinds, 15 to 20% were built by Ford, including approximately 10,000 half-trucks."
It's interesting to note that while Americans of Japanese ancestry were rounded up and placed in camps by the US government, large companies like Ford were allowed to help build the Nazi military without much interference.

VOLKSWAGEN was a relatively small company until Hitler entrusted it with making the "people's car" - the Beetle. Although designed before Hitler, the Beetle was produced as part of the Nazi Party's new economic policy called the "Motoriserung." Soon, its factories were also producing grenades, land mines and V1 rockets to help the Nazis fight the war. To speed along production, VW used as many as 20,000 slave laborers - the vast majority being foreign prisoners from Russia, Poland, France, Belgium and Holland. At Volkswagen, the foreign workforce was subjected to incessant beatings, malnutrition and early death.
VW's founder, Ferdinand Porsche, was an SS activist and chairman of the Panzer committee which developed innovations in armored vehicles. He also played a key role in developing the Fi 103 flying bombs which were used indiscriminately against civilians.
Statements taken from the U.S. Army War Crimes Investigation report about the VW hospital facilities: "In the opinion of this officer the function of this organization was nothing more than a death chamber for children of slave workers and veiled by the term 'maternity hospital.'" "The infants literally rotted away with the same sequence of symptoms, vomiting, diarrhea, emaciation, distended blueish colored abdomens and death. The nursery was loaded with bedbugs and flies. The infants cried all night while being bitten by the bedbugs. . . . One mother attempted to take her child from the nursery in a hand bag."

These saucy young gents are ready to take on, or over, the world in Hugo Boss' 1936 line of Nazi uniforms and accessories.
Exposed in 1997, Hugo Boss admitted that not only did its factories make uniforms for the German SS, storm troopers, Wehrmacht and Hitler Youth, they probably did so with slave labor.

KRUPP - Makers of washing machines, coffee makers, and the Nazi gas chambers. Krupp used over 70,000 people as slave labor in factories making armaments for the Nazis. It even operated a plant inside the infamous Auschwitz concentration camp which manufactured fuses, and another at the Ravensbreuck camp.
Quotes from the war crimes tribunal transcripts:
* "The Krupp family contributed from the treasury of the main Krupp company 4,738,446 marks to the Nazi Party fund."
* "Once the war was on, Krupps, both Von Bohlen and Alfried being directly responsible therefor, led German industry in violating treaties and international law by employing enslaved laborers, impressed and imported from nearly every country occupied by Germany, and by compelling prisoners of war to make arms and munitions for use against their own countries. There is ample evidence that in Krupp's custody and service they were underfed and overworked, misused, and inhumanly treated. Captured records show that in September 1944 Krupp concerns were working 54,990 foreign workers and 18,902 prisoners of war."
* The children were housed in "sort of prison bunks... The children there were quite naked... Many of them had swollen heads... These children were so undernourished... Fifty or sixty children died every day, and as many were born every day, because there was an influx of eastern female workers with children... The children were cremated inside the camp...."

BAYER used to be a much larger German chemical company called IG Farben. Like Krupp and the telecom company Siemens, IG Farben operated in the Auschwitz death camp where it used prison labor in the production of synthetic rubber and oil. However, their most ghastly act was in the sale of Zyklon B - the poison used in the Nazi gas chambers. During the Nuremburg trials, 24 IG Farben executives were indicted and charged with 5 counts including "slavery and mass murder." 25,000 of the 35,000 slave laborers who worked for IG Farben at Auschwitz died there. The life expectancy of the average slave laborer was 3 and a half months.


See also, from *here* @ the Congressional Record, about a ship full of Jewish immigrants from Nazi Germany, primarily, being turned away from our shores. The truth about the U.S. isn't pretty, and our media makeovers don't make it prettier.
Posted by Julian Real at 2:34 AM No comments:

May she remain safe and free.

What follows is an article about her struggles and political challenges ahead, from The Washington Post. Please click on the title below to link back.

Suu Kyi says she could work with regime 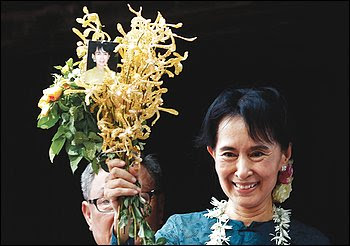 RANGOON, BURMA - Pro-democracy leader Aung San Suu Kyi promised Sunday to seek political compromise with the Burmese regime that has detained her for 15 of the past 21 years.

In her first speech since being released from house arrest Saturday, surrounded by thousands of cheering supporters at her party's ramshackle headquarters in Rangoon, the Nobel laureate called for dialogue with the ruling generals. She hinted that her long-held stance backing Western economic sanctions against the regime could be eased should the Burmese people desire it, something she had not previously suggested.

"I've always believed in compromise - I don't like the idea that people think we are not for compromise," she said at a crowded news conference at her National League for Democracy headquarters.

Suu Kyi called on the world to help Burma move toward democracy after last week's landslide election victory for the regime and a political divide that analysts say could be wider than ever. Although Suu Kyi scored a resounding election victory 20 years ago, the military has prevented her from leading a process toward a democratic government and she remains sidelined by the regime.

Suu Kyi refused to single out parties and groups she would or would not work with, instead choosing a tone of reconciliation, particularly with the military.

"If there weren't any differences, there would be no need for reconciliation," she said Sunday, behind a wall of journalists and supporters inside the NLD office. "All of those groups and parties in Burma who truly believe in democracy, I would like to help."

She would not be specific about her or her party's political plans.

"My next political move? But we are moving all the time," she said. "How soon I am able to achieve democracy depends entirely on how much support the people will give us."

Sunday's turnout for Suu Kyi's appearance was evidence that her status as an icon has not diminished. Crowds began gathering well before the rally's midday start, and there was little security presence from the often heavy-handed junta. Many of those in attendance said they had heard on banned radio stations about Suu Kyi's release and planned rally.

Buddhist monks also were out in force, apparently no longer afraid after their last major display of political dissent in Burma in September 2007: anti-government protests known as the "Saffron Revolution." The monks looked out from the monastery across the street from where Suu Kyi was speaking, and all around Burmese watched from rooftops, doorways and perched in trees to get a better vantage point. Because of the tightly packed crowds, few could see or hear her, but they knew she was there.

"I wanted to talk to her," said Daw Ama, 83, who has witnessed Burma's 48 years of military dictatorship.

Suu Kyi called on Burmese to work together to "lighten the hardships of the people" and mentioned the more than 2,200 political prisoners who continue to occupy the country's jails.

There is no indication of whether her release could be followed by more, or of the junta's response to this weekend's events, said Jared Genser, Suu Kyi's Washington-based international legal counsel.

"I have seen no evidence to suggest that the junta has any interest in engaging in dialogue, compromising, let alone release any other political prisoners," he said in reference to the military government's opaque decision-making process.

Although Suu Kyi talked Sunday of reconciliation and engagement with the military, the regime thus far has not even mentioned her publicly, let alone indicated a desire to engage in dialogue.

"Now is the time for the U.S. government to both increase pressure on and engagement with the regime," Genser said.


Finch is a special correspondent.
Posted by Julian Real at 2:03 AM No comments: