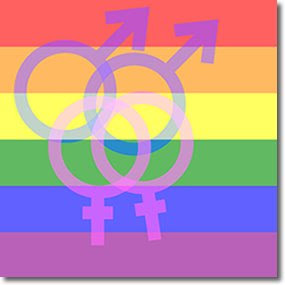 After much deep soul-searching and extremely helpful communication with a radical feminist, YC, on this subject, I have decided to "come out" as pro-Queer marriage, while maintaining my personal-political objections and non-support of the "traditionally" misogynist, heterosexist, racist, and genocidal institution of marriage in the white, white West. And I hope it is obvious that the term "same-sex marriage" is trans-ignorant and invisibilises many transpeople's experience of themselves and their relationships.

And, due to other conversations, and issues making the news in the womanist/feminist blogosphere, I am also "coming out" as supportive of transpeople, trans identity, trans experience, and trans politics. As noted somewhere on the blogosphere--Lorde knows where--I could and likely would have identified as transgendered had I been a born in 1985. The queer communities I know are very inclusive and supportive of transgendered people's lives. That was not even remotely the case when I was a youngin'.

I think my own varying levels of feeling quite alienated in and around queer communities, due largely to being militantly and radically profeminist, have made me reluctant to take many public positions on matters centrally impacting LGBT/Queer communities and individuals.

I am a "woman-centered" man who loves womankind fiercely. I publicly and privately oppose cis or trans men's attempts to control or destroy cis- or trans-women and girls' humanity. I don't know too many gay cismen or transmen who are woman-centered, in ways that I'd consider deeply respectful of women. Of course I don't know too many heterosexual men who are deeply or consistently respectful of women in profeminist/womanist ways either. And we all know which men are in charge of major social, economic, and political institutions. Clue: it isn't gay or trans men!!!

To pull together these themes:
As a transperson once said at a public venue: 'I'm not identified as a woman or a man, so what does the fight for "same-sex marriage" have to do with me? Who is out there who is "the same sex" as me?' I'll add: how does "same-sex" marriage address intersex people's existence and right to be wed?

I welcome more inclusive language in our many battles for equality and dignity as people.

Julian
END OF POST.
Posted by Julian Real at 7:11 PM No comments:

Regarding Ward Churchill being a Batterer

It has come to my attention that Ward Churchill, [white] champion of [male] American Indians, is and/or was a batterer of women, including at least one American Indian woman.

I am planning to post more on this in the future, but for now am alerting anyone who comes by that I will not link to him any longer from this blog.

Maybe some women (or men) could beat the shit out of him, and he could see what it feels like.
END OF POST.
Posted by Julian Real at 6:49 PM No comments: