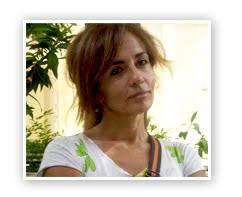 Warning: The film mentioned here contains lots of graphic objectification of women, but is deeply critical of it from a feminist perspective. The film was made by Lorella Zanardo.

In inglese:
You can find a feminist's blog in Italy, which is about the film On Women's Bodies. The documentary is about the objectification of women in Italian television media.

For more of an introduction, and a link to the film with English subtitles, go to this UK blog, The F-Word, linked to here.

A letter to Andrea Dworkin, on what would have been her 63rd birthday 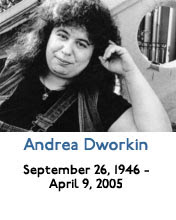 It gets harder each fall to say "Happy New Year" and believe it will, in fact, be happy for over half the population on Earth. It's been another very rough year, in fact. The gynocide continues unabated, with white men as collectively self-absorbed as ever about what's going on around us, particularly what we do to other people without taking responsibility or feeling remorse. As a group, we white men show ourselves daily to be the most heartless, callous, and cruel group of bastards on Earth. And it's our astounding passivity as well as our racist woman-hating aggressive behavior that makes us so.

I remain sad and angry at the way your books are misread, misunderstood, and just plain ignored by the people who do have access to your work, who can read, but won't read it.

That people can't see your work as humanitarian, as loving of humanity, well, that alone says a lot about the fucked up ways our dominant educational systems and media teach "reality".

You fought so hard to have the most basic things understood: that women are human, for example, precisely to the degree that men are human. And for that you are still called "a man-hater".

You fought to make the case that the pornographers and their white male supremacist values and practices beyond the pornography industry, not genes, not G-d, not hormones, make men rapists. And for that you are still called "a man-hater".

I have been puzzling over that one, especially in this last year, and I wanted to share with you what I think is going on here, in a world I am at least thankful you don't have to live in any more, much as I selfishly wish you were still in it.

What I think is going on is that white heterosexual men, especially, but men generally, get really accustomed to having our asses wiped by women from a very early age. And fed all of our first meals, sometimes from women's bodies directly.

We really do believe, in those early years and later, that women are "for us". "FOR US", as if women couldn't possibly exist on this Earth for any other reasons, and not for that one at all.

We men grow up seeing all the many ways women are degraded and humiliated, often in our own homes, but if not there then from the apartment next door, or the house down the block, or from the latest news story of a husband or boyfriend killing his female partner, always, always sensationalised rather that appropriately analysed in the most powerful media. And the story of a woman killed by her male co-worker. Or the many untold stories of some random man on the street who felt like "expressing his feelings" by murdering a prostitute who just possibly may not have wanted another procurer, another renter of humans, another possessor of women, in her face that day or night; or those untold stories of the man who harasses or murders some other woman who he thinks is a prostitute, "for him", because she's Black or Brown and has the audacity to be outside on a street, talking on her cell phone, not turning in his direction when he arrogantly and predatorially beckons her to him, never calling her by her full name, never calling her by any name with respect; or those untold stories of men murdering the women someone once proclaimed "to be his" wife; or those women, lesbian or not, trans or not, who may or may not be prostitutes, who, regardless, tell him to "fuck off" for following and harassing them.

You wanted people to understand that prostitutes are human beings precisely to the degree that any man is, including the men who would use and abuse and kill her. And for that you are stigmatised as "a man-hater".

You spoke truths about men, about us as a politically active class of people, who commit atrocities few seem to want to identify as such. You were sometimes, and not very often, angry. You were usually humorous and deeply caring and deeply concerned about the state of terror and subjugation women, as a political class of human beings, live in daily.

You spoke those truths without taking care of men's feelings. You didn't write to make men feel good about themselves while they were faced with coming to terms with what we men do that is in no way good, in groups and as individual men, against and to women.

You didn't take care of men's feelings. You didn't wipe our asses or spoon feed us baby food. You expressed anger angrily. You expressed pain painfully. You expressed social truth truthfully, and THAT is why I think men call you "a man-hater" rather than a lover of humanity. Also because you focused on women's suffering under male supremacy, not men's suffering that is accompanied by privileges and entitlements to use women as if "they are for us". Because of that narrow focus on over half the human population, men can't imagine that being "humanitarian work". How misogynistic is THAT? Like I have to ask you. You taught me how misogynistic that is.

You taught me that caring about the political realities: the economic exploitation, sexual violence, and social subordination by gender, sexuality, and race, of women and girls by men and boys, was, according to men on the white Right and the white Left, not WORTH focusing on. I heard you. And I believe you not because you said it, but because it is socially true. I listen in my heart for your many words of insight and wisdom. If white Christians can listen for a white Jesus or an imagined white male sky-god, I can listen for you and Audre Lorde. And I do.

Thank you for all the unbelievably hard work you did to educate us about what is and has been happening to women. Thank you for peeling away layers of incomprehension, delusion, and denial that keeps so many men from knowing, let alone feeling, what women experience individually and collectively because they aren't men--because they are women.

I await, not passively, the time when men, collectively, will feel outrage and demonstrate focused action against white male supremacists, including ourselves.

Maybe next year the report will be better. You, more than any other person, taught me to have hope for just such a time. And there will be a time after that, when white male supremacy is no more, when people--seen as fully human, not as objects or things--will be humane to one another.

Thank you for being human in a way no man I know is: a human being who loves women so much; who refused to be silent about the terrorism and atrocity women face, endure, fight against, and still die from on a massive scale; who refused to call it anything but terrorism and atrocity. Men can be as humane as any caring souls, if we'd be willing to let go of our collective callousness and refusal to believe women have a right to be free of men's needs and desires. And to know that's not just a right. It is a reality awaiting its entrance through men's rusty locked gates of ignorance and inaction.

With hope that you are resting in peace,