Happy Birthday to two women who have been working for at least a little bit of respect for womankind for several decades, Aretha Franklin and Gloria Steinem: 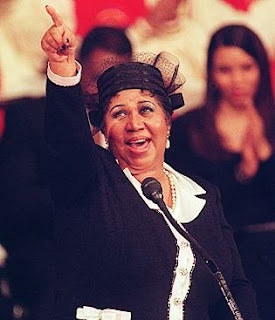 Please scroll down a bit on this related web page for biographical information about her, as well as her discography.

Here, [c]ommentator Evelyn C. White describes the life-affirming effect Aretha Franklin's powerful anthem, Respect, had on her and other young black women growing up in the turbulent 1960s. Respect is one of NPR's 100 Most Important American Musical Works of the 20th Century. 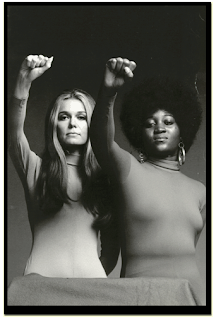 "For the four or five years surrounding the birth of Ms., I was traveling and speaking as a team with a black feminist partner: first Dorothy Pitman Hughes, a child-care pioneer, then lawyer Florynce Kennedy, and finally activist Margaret Sloan. By speaking together at hundreds of public meetings, we hoped to widen a public image of the women's movement created largely by its first homegrown media event, The Feminine Mystique.... Despite the many early reformist virtues of The Feminine Mystique, it had managed to appear at the height of the civil rights movement with almost no reference to black women or other women of color. It was most relevant to the problems of the white well-educated suburban homemakers who were standing by their kitchen sinks justifiably wondering if there weren't 'more to life than this.' As a result, white-middle-class movement had become the catch phrase of journalists describing feminism in the United States..., and divisions among women were still deep."
Gloria Steinem, Outrageous Acts and Everyday Rebellions (1983), pp. 5-6

See this autobiographical essay by Gloria Steinem, for more of herstory.
END OF POST.
Posted by Julian Real at 3:23 PM No comments: