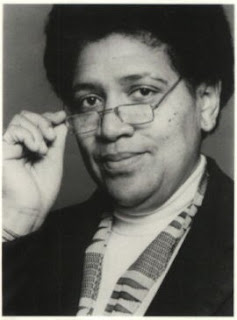 What follows are excerpted portions of the essay and then a short conversation on this subject between Audre Lorde (photo above) and Claudia Tate (photo below). Sadly, both women have passed on, each having battled cancer. The specific excerpts and discussion that follows is from a book I have gained so much from reading, Black Women Writers at Work, edited by African American Studies professor and literary critic, Claudia Tate.

The complete essay by Lorde is linked to here. Text below is credited to the appropriate sources.

Lorde's essay is one of the great classics of radical feminist theory and Sister Outsider is one of my very favorite feminist/Womanist books. I have returned to it often.

During World War II, we bought sealed plastic packets of white, uncolored margarine, with a tiny, intense pellet of yellow coloring perched like a topaz just inside the clear skin of the bag. We would leave the margarine out for a while to soften, and then we would pinch the little pellet to break it inside the bag, releasing the rich yellowness into the soft pale mass of margarine. Then taking it carefully between our fingers, we would knead it gently back and forth, over and over, until the color had spread throughout the whole pound bag of margarine, thoroughly coloring it.

Claudia Tate: I am frequently jarred by my sometimes unconscious attempt to identify the sex of the person addressed in the poem. Since I associate the speaker's voice with you, and since I'm not always conscious that you are a lesbian, the jarring occurs when I realize the object of affection is likewise a woman. I'm certain this disturbance originates in how society defines love in terms of heterosexuality. So if we are to see love as a "universal" concept, society pressures us to see it as heterosexual.

Audre Lorde: Yes, we're supposed to see "universal" love as heterosexual. What I insist upon in my work is that there is no such thing as universal love in literature. There is this love in this poem. The poem happens when I, Audre Lorde, poet, deal with the particular instead of the "UNIVERSAL." My power as a person, as a poet, comes from who I am. I am a particular person. The relationships I have had, in which people kept me alive, helped sustain me, were sustained by me, were particular relationships. They help give me my particular identity, which is the source of my energy. Not to deal with my life in my art is to cut out the fount of my strength.