"Those statistics are not abstract to me. Every three minutes a woman is being raped. Every eighteen seconds a woman is being beaten. There is nothing abstract about it. It is happening right now as I am speaking." -Andrea Dworkin 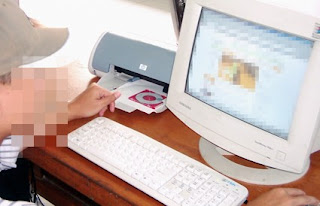 The above image comes from this website, which has a short article by AN HONEST MAN about men's use of internet pornography. The text of this short article reads as follows:

According to a new survey, one in four men views pornography online, and we've gotta believe that is a vast underestimation. What's worrisome to many, though, is that unlike the stash of magazines in your underwear drawer, Internet pornography leaves behind difficult-to-hide traces such as auto-complete entries (those helpful windows that pop-up when you begin typing in search boxes and address bars), not too mention irritating pop-ups and spyware.

There are even anecdotal tales about online pornography ruining relationships. For example, take Sarah from Cornwall who left her husband Greg after finding a disturbingly long list of pornographic sites in his browser history, or Christine who decided to stay with her husband Peter and instead extracted her revenge by pouring superglue into his modem. Just remember, if you're honest about it (everyone knows you're doing it anyway), and make sure ads for nasty videos don't pop up while your daughter is playing her 'Dora the Explorer' game, you should be okay. [From: Guardian]

And here are some of the comments written in by to or three MEN and one woman:

Whenever I hear about some "pleasant [white] man next door" in a working or middle class neighborhood who was found out to have raped several women, or incested his daughter, one of the first questions that occurs to me to ask is: how many people knew what his consumption of pornography was and what the content of it was? Because--SURPRISE--there's a strong and meaningful correlation between men's hetero/sex[ist] offences and the other anti-woman behaviors in a man's life. For me, this is in the "no brainer" category. But often when such a nice, quiet, gentle man is found to be guilty of rape and/or incest, the neighbors--who knows how close by they live--often scratch their heads in amazement.

For those men reading this who are all puffed up right now with indignation at me stating that YES, you DO commit "a sexual offence" by accessing such images, and you're likely a serial sex offender, using this criteria, we have next to consider how and what questions are asked of women in determining whether or not they are survivors of sexual offences. Before any heteromale reader next accesses such images, let me ask you four questions:

1. Did the woman or girl you are about to visually access give you permission, in person or in writing, to look at her?

3. Are you sure what you're about to watch isn't the filming of her rape or other sexual assault?

4. Given the very high likelihood that any woman's image you find that was produced and distributed as pornography, made by pimps with cameras, does the "reasonable conclusion" that you are CHOOSING to access images or videos of female survivors of abuse bother you in the least? Does it register as "something harmful" to humanity to do?

I am raising one reason why stats of men who abuse women are far too low. But my criteria are far from stringent compared to what the following documents describe on the subject of quantifying sexual assault and rape statistics. There questions get asked like "If a man rapes a woman multiple times, is that considered 'one rape'?" Do statistics carefully distinguish between incidents of rape, including multiple rapes of, say, prostituted and/or married women, or does it just do "a body count" on those raped?

For more, see this:
http://new.vawnet.org/Assoc_Files_VAWnet/AR_RapeStatistics.pdf

and also this post over at the abyss2hope blog.

In this and future posts, I will make the case that most heterosexual men commit sexual offences and/or sexist assaults against women, and that I determine this not only by what women say, but by what such men readily admit to me (or to the general public) they do, regularly and repeatedly.

END OF POST.
Posted by Julian Real at 7:42 PM No comments:

Everyday Male Chauvinism. Men: do you see what's wrong with this picture?

[above is an example of sexism that ISN'T interpersonal, but is rather institutionalised. It is from here]

A couple of days ago, I just found out about this written material on men's interpersonal sexism.

What follows is a PDF document titled "Everyday Male Chauvinism" and it was written by two men. If the link doesn't work, try copying and pasting the link into your browser's URL bar.

***30 Dec. 2009 update: Arghhh! The 30 Nov. link doesn't work either, but fortunately an internet friend and feminist colleague, Milla, has sent me some ways to access this important work. THANK YOU, MILLA!!!!! <3 (You can see her complete comment below this post and several earlier comments.) I've also put the first link that follows in my list of important webpages/websites on the far right of this blog, down a ways, titled "Everyday Male Chauvinism". Just now appears some of Milla's comment to me with the ACTIVE links!!! Fingers crossed.***


i've noticed that the html-link isn't working either. and i really want to share this text so i copied it to my blog:


the link is currently only visible in this post, should find some nice place for it:
http://sosiaalikeskus.wordpress.com/2009/12/30/looking-4-romance-everyday-male-chauvinism/
[scroll down on that webpage for the link titled "everyday male chauvinism"-- Julian]


[This is no longer the case: ***30 Nov. 2009 update: it was brought to my attention that the link I had to the pdf file no longer works, so I'm linking here to an HTML version of "Everyday Male Chauvinism" and if anyone finds a working link to the pdf file, sent it right along and I'll post it here as well. Here's the HTML version.***]


Let me know what you think of it. I don't know either of the authors. But depending on what you write to me, I may contact them.