Good-bye to Anonymity. Hello to Accountability. 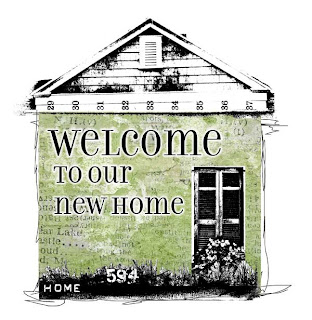 I realise this may mean that some women (and trans and intersex people, and men) who wish to post comments here may not be able to as they once were, but going through a simple process of registering will allow comments to be made.

This is no longer a blog promoting harming people. It is a blog about empowering people to be free from oppression, and to hold oppressors accountable to what we do. It is a place to strategise, discuss, share, and support one another's work in challenging and working to radically transform or compost CRAP (Corporate Racist Atrocious Patriarchy) into something far more humane, just, Earth-friendly, non-genocidal, and non-gynocidal.

I want this to be a space where profeminism means understanding intersectionality of oppressions, and that most women are women of color. That for most of the world's women, sexual violence is not the only or primary means of harming or killing women: starvation, illness through unclean or poisoned water and land, and poverty are primary means of committing gynocide globally.

I may continue to keep a focus on sexual violence against women, because that is my background, what I have studied most and have heard from women about most. But I want the definition of "profeminism" to mean that one holds the radical view that there are many systems at work besides what is strictly called "patriarchy" that subordinate, injure, oppress, and kill women and girls. And this blog will never be one to discount or deny the harm to women and girls of patriarchal atrocities, practices, policies, laws, customs, values, and ways of being.

Looking forward to the future at A.R.P.

What do you see? THIS PHOTOGRAPH speaks a thousand words 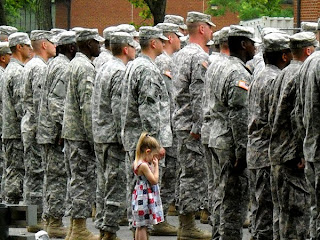 [image goes with the article which appears later in this post. Both image and article are here]

What's in a picture that makes it big in mainstream media? Usually a lot. Such is the case with the image above. It's chock full of political messages, all designed to tug at the hearts of those U.S. Americans who want to believe that the U.S. military is "good" and does "good things" around the world.

Is this a sweet and sad mass media photo of a little white girl who doesn't want her daddy to go off to war abroad?

Is this a mass media photo of U.S. military personnel who are about to go murder and rape women in another land?

Is this a dominant media photo of the militarisation of heterosexism, racism, classism, ecocide, and misogyny?

Is it a dominant media photo of the glorification of these oppressive systems?

Is it a classist image of non-rich men who are economically coerced into giving their lives for a country that, if they are poor and/or of color, doesn't give a shit about them and never has?

Is it a photo, with the story and accompanying photos, that is designed to make the viewer feel for that little girl, the white U.S. one, whose father, with the help of his military mates, will likely murder four year old girls of color, who may well be holding their mothers' or fathers' hands at the moment of their death?

Is it a photo of men who will rape and murder women in front of those women's four year old daughters, sons, husbands, and other relatives?

Christina brought this image to my attention and wrote:

As far as I am concerned this is WHM exploitation at its worst. The WHM controlled media are using an innocent little four year old girl to make us throw our support behind WHM imperialism. History is repeating its self. White British and [U.S.] American males in uniform are yet again going into foreign countries, oppressing their people and raping their women.

The innocent little girl in this article does not know the first thing about the evils of white heterosexual male supremacy. How many of those discussing WHM in the photo are rapists or oppressors. Even her father could be one.

It makes me so angry when I see WHM exploiting such young and innocent girls like this.

I always used to think that British WHM were the most sexist and racist in the world, but on seen what the American WHM gets up to I am not sure if there is much of a difference.

I responded to her:
About the image and article: I completely agree with you, and may I post some or all of what you say about that image to my blog as a post? I may add some commentary of my own, totally supportive of what you wrote. I think there's another dimension of evil to this photo, beyond the precise evils you name. And that is that it makes the viewer the empathiser with the girl and both "daddy" and soldier" into heroic ideas. Both are rapists. He is also likely to rape her. Maybe not "that one white man" but we know father-daughter incest is the most common form of child sexual abuse, and we also know that militarising men does nothing to make them more humane to anyone.

This is the kind of image that burns into the minds of white viewers an idea that WHM supremacy is both good and right. It is admirable and heartbreaking, but for all the wrong reasons. It is terribly sad for children, especially young children, to be separated from parents they love. But I know in this country, especially, girls and boys of color have been separated from their parents for so many reasons--due to slavery, due to putting children of color to work, due to the mother having to work outside the home, sometimes two and three jobs to make ends meet, due to the father having two work outside the home all the time, due to their being a father who steals his children from his wife if she accuses him of incesting the children or battering her.

And the global "picture" is atrocious. Abominable. It glorifies imperialism/rapism/militarism/white male supremacy/capitalism/the invisibilisation of four year old Iraqi girls whose daddies are going to be murdered by that man whose hand she is holding, and more.Yes, one of those men is likely to rape a woman overseas. And they are likely to kill mothers and fathers of four year old girls in Iraq, and they are also likely to murder the four year old girl as well. (I don't even want to think about what else they might do to such a child.)

So everything you say, yes. YES.

A family photo that shows a little girl beside her father and his fellow soldiers in uniform as they prepare to go to war has resonated well beyond the tight knit Bennethum clan.

So much so, that when Army Reservist Staff Sgt. Brett Bennethum lined up in formation at his deployment this July, she couldn't let go.

No one had the heart to pull her away.

The commanding officer allowed Paige to say goodbye as her dad prepared to ship off from Fort Dix.

Paige's mom Abby captured the moment with her camera and her aunt passed the image along to a Berks County, Pa. newspaper.

"I’ve had strangers looking me up online, sending me messages that they are touched by it ... offering a lot of support," Abby Bennethum told NBCPhiladelphia.

The picture took on a life of its own online this week. Abby says that suddenly, people were knocking on her door. "Literally overnight, there's all these people that just want to do anything they can," she says. Though she says her husband hasn't seen any stories about his family yet, he expects to.

For her part, Paige still remembers how she felt that day in July. Looking at the picture of herself -- her dad now overseas -- Paige remembers, "I didn't want to let go of him."

She calls the work he does transporting supplies across the Iraqi border, "just nice."

But that doesn't change her feelings.

"I just miss my dad right now," she says.

Here's more analysis, not the type to be printed in any dominant U.S. media:
The U.S. military, and it's more covert operations, are known well for doing a few things, none of them "good":

--They invade countries where "other" people live. Usually people of color. Often illegally. And they go there to bomb and kill the citizens of those countries in ruthless and reckless ways. They destroy water cleaning systems, sources of electricity, major roadways, government buildings, and destroy the homes of thousands, tens of thousands, of innocent people who happened to live in a country the U.S. has decided, often for financial/corporate/military industrial complex reasons to invade and take over, all the while pretending it is "for their own good".

To understand exactly how some of this works, please read the work of John Perkins. He knows how U.S. corporations and the military work because he was part of it. Read also the work of Stan Goff, who was part of a very elite U.S. military group.

--They seek dominance in those areas, either by supporting the overthrow of leaders the U.S. government "doesn't like" (because, for example, the leader is against corporate capitalism, or because it doesn't want to share its oil with the U.S.). Or they set up puppet governments in those countries, after bombing them into a state of generations-long post-traumatic stress and infrastructure rebuilding.

--They rape the women and girls of those countries. They do this with various intentions. They do it because they want to, the desire to, and they can. They do it because force and dominance is sexual for them. They do it because no one will ever hold them accountable, especially when they kill those they have raped and murdered everyone else who witnessed it, including men and children. They do it as part not only of a global gynocidal war, but as a practice of genocide, of gross violent dominance over other regions of the world and the people who live there.