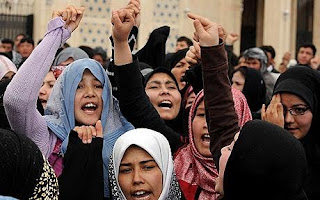 [image is from here, at a blog called The Kitchen Table. That blog is now archived only and I link it on the right side of this page in the blogroll]

The above image appears on The Kitchen Table blog in a post which contains a link to an article from the NYT. The New York Times piece doesn't show the image above, however. Instead, the NYT shows a different image with a story about Afghan women protesting in their home country, against laws that would make men's violence against women, and other means of subordinating women, much more "legal". I wish I had more information about the women in the image above, and chose it as a visual reminder that women are struggling to survive men's war against them, globally. It's rather telling of the conditions of women in patriarchies across the Earth, that when I see an image of women in protest, it is generally depicting an effort by women to fight for their rights and liberty, against those inhumane "rights and liberties" of men, who rule the places where women protest. Unfortunately, white men tend to do one of two things regarding images such as this one: they either believe it's only "those" men (usually of color) who are abusing women, or they believe that such an image proves that conditions here in the white, white West are not at all misogynistic and oppressively brutal to women as a class.

What follows is radical feminist Jennifer Drew's response to this October 7, 2009 post, where it also appears as a comment.

Increasingly, and with a combination of rage and a hope that refuses to die--even while on life support, I believe that if men can't listen to and hear women speak out on this matter of emergency, fuck them for listening only to a man. Fuck them for being so SELF-CENTERED, MISOGYNISTIC, and INDIFFERENT as to think women don't speak truth on matters which most negatively impact their own and other women's lives.

So here's Jennifer Drew's comment, and to all men: READ THIS TOO, and read it as if the person you trusted most in the world to tell you the truth were saying it, to you, every hour of every day of your life, because this IS that much of an emergency. From Jennifer Drew to Anonymous of October 7:

So true [...] and every word you write is fact not fiction, not man-hating - just facts.

This also shows society is indeed male-centered, male-dominated and male-obsessed.

Where indeed are the men loudly shaming other men who rape and commit male violence against women. I and many, many women continue to wait in vain. In the meantime women are hounded, sexually insulted and denied their right of speaking their truth.

Granted there are a few men who dare to challenge other men but I refuse to put them on pedestals. Instead they are doing what all or most men should do and that is denounce men who hold women in contempt; refuse to hold misogynistic views and finally but perhaps most importantly, believe women like men are human and innately entitled to human status and all it entails. Those men who go against dominant masculinity are not more worthy or more praiseworthy rather they are doing what all men should be taught as boys and that is women just like men are human and women are not men's sexual commodities or put on this earth to cater to men's every whim, demand or pseudo male sex right.

If any male imagines men's crimes against women are exaggerated and lies then do yourselves a favour and read The War Against Women by Marilyn French. Oh but I forget anything written by a woman and particularly a feminist woman is apparently man-hating and can be dismissed as 'fantasy.' I wish!

Is it really asking too much for men to cease enacting 'bystander behaviour' and for once just once -condemn those men who rape and commit other forms of sexual violence against women. For once speak out against normalisation of prostitution because despite propaganda it is men who are driving the sexual exploitation of women and girls not the reverse.

Yes, because it is all about male power and male control over women. Now I await a deluge of hysterical complaints from men all claiming they are being victimised by such 'unjust treatment.' So it continues - men's never ending war on women.

"The Good Man" and some notes about Man Hating 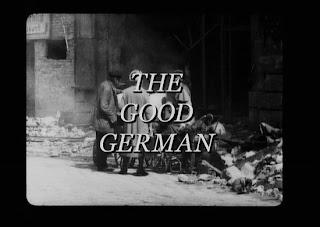 I have done what I can (so far) to identify the phallusies found suffusing the myth of man-hating, comparing it to the reality of woman-hating elsewhere on this blog.

But, I do not wish to shame or silence anyone who does, in fact, hate men. Such a state of being is rare indeed, not encoded in law, not institutionalised, not found in any centuries old customs. But, it exists, because, generally speaking, it is better to hate those who harm you than to hate yourself for being so harmed. And it is better still not to hate at all. James Baldwin and Andrea Dworkin taught me that.

But, against great odds, some of us do hate men, most often particular perpetrators. I used to hate men. I don't any more, not due to any improvement in men's behavior, to be sure. Instead of hate, I feel disappointment, despair, and rage at how much power men have globally and how little of it is used to systematically stop other men from mistreating and abusing women.

Should there be a trial, perhaps a class action suit leveled against men by women in a feminist court, I hope that all men who are living their lives without regularly confronting other men on our violence against and domination of women are found guilty of being accomplices to the garrisoned crime of gynocide.

For that man who doesn't rape girls or women, who would never belittle or beat the shit out of a woman he proclaims to love, who won't use and abuse the women in pornography and prostitution, for that man who respects one woman he knows, I have a title. I call him "The Good Man". I use this term as a political parallel to the term I grew up understanding with increasing horror: "The Good German".

The notion of "a good German", references historically real European people who lived during the time of Hitler's rule. Such a person believed they were not to blame for allowing Hitler to persecute European Jews and other ethnic and political groups, who, ostensibly, did not see the Nazi Holocaust as it occurred before their eyes.

The Good German witnessed Jews in their region being arrested, shops shut down marked "Juden", families taken away in tears and terror. The Good German heard the rumbling of the cattle cars, smelled the smoke, saw the ashen sky, and still believed in Hitler and his political philosophy of economic and cultural strength through the eradication of certain people from European societies. These were the people who later claimed to not know what was going on. Exactly what part of the Nazi atrocity didn't reach them? Sure, most Germans and other non-Jewish Europeans didn't work in the Concentration Camps, weren't members of the SS, and didn't wear brown shirts. But they saw things that were bigoted and atrocious and did nothing to find out more and stop those cattle cars, liberating the people in them. They did not try and kill Nazis. They chose to believe in a myth: that Germany could be great, even if it required genocide to be great.

The U.S. is not Nazi Germany. George W. Bush was not "the new Adolph Hitler" and any who think he was, or who think Barack Obama is, are obviously grossly ignorant about European and U.S. American history and what constitutes a fascistic militarised police state operating out of the most dangerous forms of bigotry--those acted out. This is not to say that there are not similarities; clearly men's bigotry against women is acted out in innumerable ways. This is not to say that we should only feel fortunate and be grateful to be living in this time, in this place. While I am grateful that I did not endure or not survive a Germany that would have killed me for at least three reasons: being Jewish, gay, and a political radical militantly opposed to fascism, I know that the privileges I enjoy are not enjoyed by most U.S. Americans. "Fortunate" is not what I am. Advantaged is what I am.

But many of us here are impoverished, denied access to health care and education, are raped, are bought and sold as slaves, and are punished for being female, Chicana, Jewish, Arab, or Palestinian, American Indian, and Black--in this country, for example. Whites and men pretend not to notice these punishments, indignations, and insults. The smell of the polluted waters coming through the pipes of poor neighborhoods, the sight of those who lay dying from the latest beating or sexual assault or medical neglect, and who are dead from poverty or medical malpractice, the sound of those who scream at night when daddy or hubby comes home, or into one's bedroom, is not registered by those of us who are Good Men.

Instead, what is staring us in the face is somehow is registered in our minds as something other than human atrocity. Those of us with race and gender privilege are prone to making outraged note of any white woman, any woman or man of color who behaves "crazily" according to our judgments and determinations. Discrimination is real, as is bigotry. Oppression reigns this land, once running red with the blood of slaughtered American Indians who fought to keep whites off their land. American Indians still struggle against great odds, to find justice and dignity. And still the white man doesn't give up working to wipe all American Indians off this land of theirs. And all women are paying the price for his many victories utilising heinous methods of control and colonisation.

There is reason enough to hate the oppressor. And, yet, so few among the oppressed do.