Pimp and Ho Drag Shows: No, it's not a "gay" thing 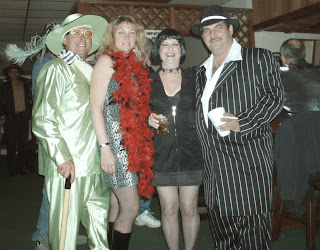 When I hear "drag show" I tend to think of a gay male supremacist community event, often a fundraiser. The funds are never being raised to help women in systems of prostitution, mind you, because the reality of women in prostitution is far from the consciousness of the participants. The last gay white male supremacist drag show I went to was held at a college. It was blatantly misogynistic, racist, classist, and pro-child sexual abuse and prostitution. And a college's money funded it. Compare this post with the last one and you might understand why racism, heterosexism, and misogyny are not just interpersonal issues. They are institutional ones.

Above is a photo of two couples, two men with two women between them. They are all dolled up as their understanding of what pimps and hos look like. And a fun time was had by all, except, of course, by women trapped by PIMPs and abused by WIMPs (see glossary to the right). Then it's not just fun and games.

Society as well as school systems endorse and promote racist misogyny and male supremacy. This event is one that happens all over the country with alarming regularity, all in the name of having an innocent good time. When "a good time" means mocking and parodying sexual trafficking and the abuse and control of women and girls, usually by men, what does it tell us that people are willing and able to unproblematically dress up and go out and pretend this really is harmless entertainment?

I'll tell you what I think it means. I think it means that privileged people don't know a damn thing about what people are enduring globally. And I think it also means they don't want to know and that when presented with the facts, they will find liberal-ass ways to make excuses for them going out and having this kind of "fun".

Please protest the next "pimp and ho" "fun' event in your town or city. Making atrocity seem like a good time is one form of evil.

Posted by Julian Real at 8:52 AM No comments:

When 'good white school officials' don't do a damn thing except ignore, deny, and protect racism, it is destined to continue

With thanks, once again, to LaReyna's Journal.

Yvette Williams is a woman with a conscience and a will to speak out against white supremacy. She has two daughters at Kettering Fairmont High School, in Dayton, Ohio. I see her actions as feminist, as she speaks out for her own humanity and that of her two daughters. She writes, in part:


This is not the first racial incident at Kettering Fairmont High School either.I have been battling perceptions and attitudes since my daughters' kindergarten and first grade years at Orchard Park Elementary School. I was not afraid to speak out on injustice and wrongdoing back then, nor am I now.


Incidents such as the Fairmont vs. Dunbar occurrence make  me concerned for the education, safety and well-being of my children. We have lived here for 12 years, supported levies and volunteered for city functions. To have these high ranking officials ignore blatant racism at a high school game on home turf disppoints me and covertly empowers those who embrace this ethnocentric lifestyle.


Ethnocentric here meaning white supremacist. For the rest of her letter to the editor, please see the pdf document here. (It is a concise, clear statement against institutionalised racism.)

I have made the contention for some time at this blog that the reason things like misogyny and white supremacy continue is very, very simple: because men and whites don't stop it, don't interrupt it, and don't challenge it. men and whites don't refuse to apologise for it, make excuses for it, defend it, support it, and practice it. Institutions are human-run. They have structures in place that make certain kinds of individual and social change very difficult, but, as has been stated a million times by women and by people of color: if the oppressors collectively decided to end white male supremacy, they could. They don't because they benefit from it and don't really want equality because men's and white's identities and egos are bound to notions of their own superiority, privileges, entitlements, and relative structural power over those they oppress. And so life as we know it in white male supremacist societies--heterosexist and classist ones, ableist and ageist ones, and unsustainable anti-Indigenist and ecocidal ones, goes on and on, speeding us all toward complete destruction.

The most oppressed and most vulnerable will suffer more, make no mistake about it. Especially in the mean time. What follows is a short video discussion about one city's response to racism, and leave it to a woman to have to speak out against it and get people to address it further. Women of color do most of the world's work, including work to end systems of oppression and atrocity. Here's the discussion between two white men about the racism in their town, and note their observation about what happens when the good people do nothing. (And we call white supremacist officials and by-standers 'good people' why?) What follows is from here.

Interesting letter to the editor in the Dayton City Paper about the Dunbar/Fairmont basketball game and some racist little suburban kids. Well written, from a Kettering parent of a Fairmont cheerleader. Thank you Yvette Williams for speaking out.

I’ve got a PDF of it for you to read, since the DCP doesn’t have a proper web site:DCP letter 120909.pg18
I’ve tried to have a discussion about race and our community- with the post about “The White City” but it devolved into a discussion about gay rights in the comments.

Here, Greg and I talk about the race issue- and what YOU can do about it in this community, starting today:

More institutional, leadership power to women like Yvette Williams. Their daughters must be very proud of her as I'm sure she is of them.
Posted by Julian Real at 8:25 AM No comments: