What's Right[-wing] About This Picture?

[I found this image online, but not at a specific URL and I searched for it on a URL but couldn't find it.]

I'm kind of expecting crayon makers to come out with a "Whiter Shades of Pale" series any day now.
Posted by Julian Real at 11:29 AM No comments:

Glenn Beck, Fux News' Homo Palien Prime Minister, is a Patriarchal White Christian Putz (some of those terms are synonymous; others are mix-and-match) 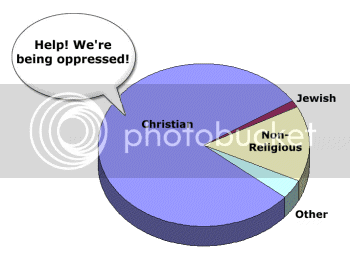 [image is from here]
May Jesus come to him in the night and smack him in the head, turn him, and smack him on the other side. I can only hope after The Rapture, those of us who actually understand who Jesus was and what values he stood for will remain on Earth, after G-d has sent all the racist-misogynist-heterosexist-anti-Semitic "Christians" straight to Their Own Special Hell, hopefully nowhere near Earth.

Nothing proves Fux News is led by the Devil more than the prominence within their network of Glenn "Satan" Beck. What follows is from *here*.

Fox News personality Glenn Beck believes the Jews murdered the biblical messiah Jesus Christ, and Gosh Darn It, if the Christian savior had been more like Barack Obama he'd have "come back and made the Jews pay for what they did."

That's just the tip of a bizarre rant recently aired by News Corporation, which featured the chalkboard-handy host once again assailing Christian social justice efforts, which many faithful see as core to their sacrament. In the process, however, Beck revealed what one prominent reverend called a fundamental "misunderstanding" of scripture, as well as an apparent detachment from the English language when it comes to the word "victim."

First of all, as the story goes, Jews did not kill Jesus. The Roman empire had him executed after Jewish religious leaders became worked into a frenzy over his ideas - or so the New Testament claims. Armed Roman guards allegedly beat and lashed him, then hung him on a cross until death.

Indeed, claiming as fact that Jews killed Jesus would seem to indicate that Beck has adopted a meme otherwise endemic to antisemitic thought and literature. The implication that Romans were stalwarts of law and reason who merely appeased the bloodthirsty Jewish mob was a vital component of Nazi propaganda.
Beck also suggests that calling Jesus the "victim" of a violent and oppressive system is "an abomination." Jesus, he insists, was really a "conqueror" who chose death at the hands of his own people in order to overcome the wages of sin for all humanity.

While an advanced theological argument could potentially be rendered to support this statement, all traces of logic seem missing. By its principle definition, what Beck is describing is victimhood. The word "victim" literally means a living being that is scarified to a deity.

A nearly universal cornerstone of Christian theology holds that Christ's death washed away man's sin in God's eyes, therefore his sacrifice is a key moment in their religious rite. Logically, it would follow that without the fundamental construction of the Christian God, who measures ill-deeds against humanity and threatens impure souls with eternal punishment, there would be no such thing as "sin" -- meaning the sacrifice chosen by Christ was to satisfy a deity. Such is the first definition of the word "victim," according to Merriam-Webster's dictionary.

The alternate definition of "victim" also contradicts Beck's application of the word. Webster further defines "victim" as "one that is acted on and usually adversely affected by a force or agent". In this understanding of the word, the conservative opinion host would seem to be suggesting that being beaten and murdered by armed thugs is not a force or agent acting on an individual in an adverse manner.

Instead, the juxtaposition of victim and conqueror is convenient for Beck in that he's trying to refute the intrinsic nature of many Christians' beliefs that the poor and needy should be comforted. Instead, the television talker opines that "redistribution of wealth" is nowhere to be found in the religious tome.

But even this rings hollow. The first generation of Christians, spoken of in the book of Acts, took it upon themselves to sell all their possessions and bring the proceeds to Christ's apostles so they might redistribute the wealth to all believers.

Acts 2:44-45 says, "All that believed were together, and had all things in common; And sold their possessions and goods, and parted them to all men, as every man had need."

The notion is multiplied by Acts 4:34-37, which adds: "There was not a needy person among them, for as many as owned lands or houses sold them and brought the proceeds of what was sold. They laid it at the apostles' feet, and it was distributed to each as any had need. There was a Levite, a native of Cyprus, Joseph, to whom the apostles gave the name Barnabas (which means 'son of encouragement'). He sold a field that belonged to him, then brought the money, and laid it at the apostles' feet."

In the spirit of the one they called a messiah, the first Christian church willingly shared their wealth with fellow believers. In this same vein, legendary author Kurt Vonnegut once opined, "'Socialism' is no more an evil word than 'Christianity.' Socialism no more prescribed Joseph Stalin and his secret police and shuttered churches than Christianity prescribed the Spanish Inquisition. Christianity and socialism alike, in fact, prescribe a society dedicated to the proposition that all men, women and children are created equal, and shalt not starve."

Facts of language and scripture considered, Beck's unusual claims about Christian theology seem to be, at best, misplaced.


A core Biblical command is to follow Jesus' example of humility, not of conquering, and to show compassion for the least of those in our midst. A different commentator, the Apostle Paul, quickly sets straight Beck's account of Christian service: “Your attitude should be the same as that of Christ Jesus, who being in very nature God did not consider equality with God something to be grasped, but made himself nothing, taking the very nature of a servant, being made in human likeness. And being found in appearance as a man, he humbled himself and became obedient to death—even death on a cross.”

People may not disagree with Beck, as he said last night, because he is Mormon. But many Christians will disagree with him because he insinuates Christianity is nothing but a pull-yourself-up-from-your-bootstraps spirituality and ignores the church's long tradition of working for the plight of the powerless.

It's certainly not the first time Beck has crossed the line with Christians, many of whom are core to the conservative political movements that make up a vast cross-section of Beck's audience. In March, after the Fox News personality claimed that "social justice" is code for Nazi authoritarianism, many religious groups took him to task, lashing back in defense of their efforts to aid the poor.

Ready with a retort was Rev. Jim Wallis, a Christian leader in Washington, D.C. who spoke with ABC News.

"Brother Glenn, let's dispense with personal attacks," he said. "I don't know you. I have no reason to attack you. But you made a statement here that needs a serious conversation. ... I know you're used to monologues, but when you say things like this, you invite a dialogue. What do you say about Dr. Martin Luther King Jr., what do you say about Desmond Tutu, about Mother Teresa, what do you say to the reverends and rabbis who gave their lives to social justice because that is their faith?"

Speaking with the New York Times, Wallis added: "What he has said attacks the very heart of our Christian faith, and Christians should no longer watch his show. [...] His show should now be in the same category as Howard Stern."

Rev. Canon Peg Chemberlin, who presides over the National Council of Churches of Christ USA, further told ABC that Beck's charges seem "ridiculous" and reveal a fundamental "misunderstanding" of scripture.

Ultimately, these silly claims boil down to Beck's apparent goal of convincing his viewers that Obama is a secret harbinger of "liberation theology"; that the president of the United States is a covert Nazi who has come to redistribute all your wealth.

Richard Lawson over at Gawker offered perhaps the most cutting response to Beck's latest assault on Christianity's core tenets, suggesting the host has just gone "insaner and insaner" as the Obama administration progresses.

"Can you believe that there is someone on national television talking about this stuff, in this manner, every day and lots of people watch it in 2010?" he asked. "It's like a Terry Gilliam movie. Only darker."