And JERK MEN say it's RADICAL FEMINISTS who blur the lines between SEX and RAPE!?! Read on... 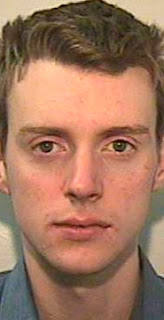 [This is a photograph of a man, Matthew Knott, who raped a thirteen year old girl where he taught and will be allowed to teach again in just over five years. No, really. Read on...]

From the UK Timesonline

I've added commentary into the piece, in brackets and in bold:

A science teacher who invented an online teenage alter ego to groom a 13-year-old girl for sex has been jailed for four years at Manchester Crown Court.

[Four years... so she'll be JUST old enough then for him to rape as an adult??]

Matthew Knott, 24, who taught at Elton High School in Bury, Greater Manchester, targeted his victim through a social networking site and then sent her explicit sexual messages demanding photographs of her naked.

He created an online profile that he called Jessica, posing as a 15-year-old, and used it to facilitate a meeting with the child, who was not a pupil at his school.

A week after meeting online he picked her up in his car, drove her to his flat and gave her orders, “like a teacher”, to take off her clothes and had sex with her.

Knott, of Miles Platting, Manchester, was barred from working with children for five years after admitting grooming a child for sex on the internet and having sexual activity with a child.

[Excuse me?: for FIVE years?! He rapes a girl-child and gets to be a teacher again after FIVE YEARS???? And imprisoned for FOUR?? And why isn't his teaching license being revoked forever?? What does a white hetero male teacher in the UK have to do for THAT to happen? Misgrade a paper? Steel copy paper? Be physically abusive to a child in the classroom? What level of white heteromale supremacist contempt for all girls does this sort of sentence show? A LOT.]

Judge Michael Henshaw told him that they were carefully planned and calculated offences carried out in a devious way.

[Really? Ya think?! What a brilliant judge!]

He said: “The type of activity you engaged in is of enormous public concern. Parents throughout this country are no doubt worried sick what their offspring might be doing when they are using the computer.

[I'd say "the concern" isn't what the children are doing, it's what ADULT HETERO WHITE MEN are doing. Does this EVER get named as such in the press? WHAT/WHO THE PROBLEM REALLY IS?]

“There are people like you who adopt identities to encourage children to commit offences.”

[Who encourage CHILDREN TO COMMIT OFFENCES?!?! Someone disbar that judge. What a completely perp-invisibilising and victim-blaming thing to say.]

Adrian Farrow, for the prosecution, told the court that Knott spotted the girl’s profile on the website, Tagged.com. It gave details of her age and where she lived. He engaged her in an hour-long online conversation.

[Thanks for advertising and promoting THAT information, Timesonline!! You getting a pimp's cut of the earnings? Just imagine the rapists rushing to that site. To encourage children, not themselves, to commit offences. Anyone catching the problem here?]

When she made it clear how young she was, he replied that he felt bad. When she asked why, he replied: “Because I want to shag a 13-year-old”.

[THAT IS SO FUCKING GROTESQUE! So he's a goddamned misogynistic, misopedic sociopath and THAT won't get your teaching license taken away for life, let alone your freedom??? Oh, wait, no, someone who says THAT gets to teach children again in six years. THAT'S AN OUTRAGE!]

Knott told her that he worked in a laboratory, asked explicit questions about her sexuality and then demanded photographs of her naked.

Although reluctant, she sent a photograph of herself in her underwear and one in her knickers.

At this point she began receiving messages from “Jessica” who asked her whether she was looking for some fun, “knickers-off sort of fun”.

[So the hetero male prick lures girls by pretending to be a girl sexually interested in girls. And LESBIANS are stigmatised as being dangerous to children?!!?]

He persuaded her to meet him on May 31 this year but her plan to take a friend for protection fell through when her friend was “grounded” for staying out late. She was said to have panicked because Knott was already on his way.

He appeared kind and calm as he drove her to his flat but then ordered her to get undressed and began fondling her.

[One gets the sense that it's the ordering part that is the real crime here, along with what THE CHILDREN not THE MEN are doing online, that is.]

[And we need to know these grim details WHY exactly? The UK Times is just making this into pornographised bullshit.]

“At his request, in a manner she described as ‘like a teacher’ she undid her trousers and pulled them off. He had sexual intercourse with her. Immediately afterwards he took her home.”

[NO HE DIDN'T HAVE "SEXUAL INTERCOURSE WITH HER": HE RAPED HER. So where are the MRAs NOW complaining about how "feminists" mix up rape with sexual intercourse. See, for example, this complete asshole's male supremacist/antifeminist understanding of how FEMINISTS, not RAPIST MEN, mistake sex for rape and rape for sex:

Around this time it surfaced that a “feminist legal theorist, ” Catharine A. MacKinnon, had compared voluntary sexual intercourse to rape. That oversimplifies somewhat; what she says is that in “male-dominated, patriarchical, heterosexist society” the line between voluntary consent and coercion is blurred, so that in sexual relations between men and women a fine distinction between “voluntary” intercourse and rape can’t be drawn. [written by some jerk named By Steven Yates, August 1, 2006 NewsWithViews.com, posted at the blog of The Rooster. For more of Yates' ridiculousness, including my replies to Rooster regarding Yates' article in the comments section calling his ass out, see here.]

Later “Jessica” sent her a message asking: “Did you have fun?” She replied that she had not. She was told to delete the record of their online contacts and to deny anything if the police became involved.

“He used that fictional character to destroy evidence, just as he used ‘Jessica’ to encourage the girl to meet him in the first place,” Mr Farrow said.

The girl later told her mother what had happened and the police were called.

I publicly applaud the victim for not keeping his rape of her a secret, and I also know that is very rare for a child who has been sexually assaulted to do; the vast majority of survivors of child rape and sexual assault are too ashamed, humiliated, self-blaming, in need of blocking it out, and terrified to speak about it at all to anyone.]

Knott, who offered no reaction as he was jailed, was also banned for five years from having internet access except in a public library and barred from being alone with a female under 16.

[EXCEPT IN A PUBLIC LIBRARY?! WTF!?!? Well, how horrendous for him that he's limited to having the opportunity to lure and rape children still, especially if they are 16!!]

This is some of the worst fucked up reporting and ruling I've ever seen in a man/teacher-raping-a-girl/student case.

(I see that Cara at The Curvature blog has also posted on this; you can get there by clicking here.)

My latest reply to the idiot, Rooster, at his blog, is this:
Hey Rooster,

I think the content of that article and what the rapist himself says, makes it abundantly clear when feminists question men's understandings of rape as sex and sex as rape, there's nothing wrong with the feminists for simply observing that men and the white male supremacist media can't make the distinction in practice or in the press.

Easy to attack the feminist theorists when men's rapist practices (that THEY call "sexual intercourse") are just right there in your face, huh?