Libertarians, of Whatever Gender, Say the Stupidest Things... Evidence Here 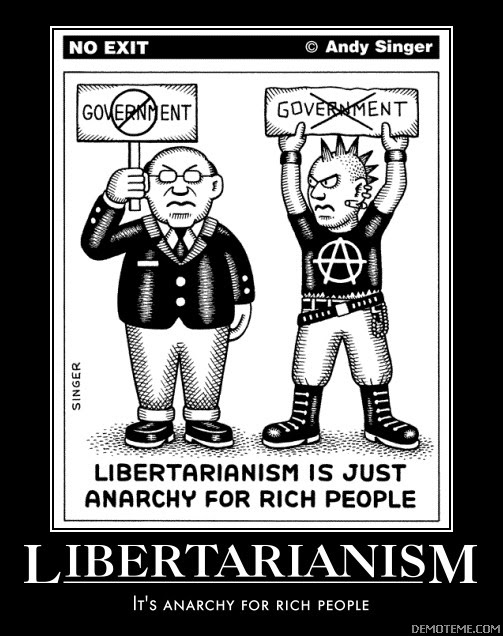 [image is from here]
Except at least some anarchists are profeminist and aren't callous fucks when it comes to having some compassion for battered and raped women. And libertarians are greedy capitalist assholes.
Not so with anarchists.
Have you ever noticed how few poor people and people of color are libertarians? There's a good reason for that: libertarians want their white Western wealth.
Walter Block is a good example. See *here* for more on him and his understandings of "libertariansim" but be careful. His writing style might put anyone into a cognitive coma.
What follows is my commentary intermingled with that of Angela Keaton's. Mine is in bold and in brackets. Hers is not.

Angela Keaton: On the fifth anniversary of Andrea Dworkin's Death

On the fifth anniversary of Andrea Dworkin's Death

Five years later, it is still clear to me that Andrea Dworkin was one of the most destructive women of the 20th century. [That's really quite a claim to infamy. You fail to make a case for the charge, however.]

Yes, the article which marks a first in Cathy Young’s career–taking a stance.

While I can defend and enjoy radical ideology of all sorts, Young takes only the easiest shots against Dworkin as did better minds all throughout Dworkin’s profoundly influential career. Let’s examine the outright manipulation of facts which should have been grappled with.

First, Dworkin and MacKinnon used fabricated statistics in front of a congressional committee and the Meese Commission. [Your evidence of that being what? Women testifying about their own experiences of being abused? My, you really do feel contempt for women who speak out about abuse, don't you? You might want to ask yourself why that is.] When Oliver North lied in front of the same jackasses, there was a perjury charge and chicken little cries of constitutional meltdown. Dworkin set back the Sexual Revolution about 120 years. [How did she do that? With what laws and legal and military force? With what national support and cultural cred? That's nonsense, Angela. And I have to suppose you know it.] North merely traded dope for guns then had the nerve to lie about it. Dworkin’s “research” goes unquestioned [except by you and every conservative, liberal, libertarian, and fascist man who loves his 24/7 access to violated women or to violate women--and the women who would prefer to defend them than challenge them on their misogyny] among the “courageous tellers of truth” (had to throw a Paglia in there) [Why? Because she's an asshole too?] who exposed Alfred Kinsey. Guess exposing bad science is an ideological crusade, ne c’est pas, Dr. Reisman? [So fucked up "sex theorists" like Kinsey can't be critiqued? Says you. What are you afraid the critics will expose? Truth?]

Speaking of lies… [You mean you're not done spreading them about Dworkin yet?]

Second, the twice married Dworkin–once to the now infamous Belgian batterer (his story? anyone?) [what the fuck is that supposed to imply? That she was lying? That she did something to warrant being battered? Please, do explain] and survived by the noxious John Stoltenberg [noxious how, Angela? And, to you? Who the fuck are you to pass judgment on people you don't know at all?]– allowed lesbians to believe she was one of them. [Allowed? How do you "allow" lesbians to believe something? Why, aren't you turning all lesbians into "passive victims" here? Don't you HATE it when people try and portray women that way? And, uhhh, John S. was and is a gay man. An out and active gay man. So, well, what about her living with a gay man means she couldn't be a lesbian? Please explain your "sexual logic" here. We know some men who are with heterosexual women for years are gay, right? So what is your evidence she wasn't a lesbian?] Why, I couldn’t speculate [Too late.] but her cronies [you mean what you are to scummy libertarian men?] still protect her and cocktail liberals hold enough homophobia to like, even crave the “man hating lesbian” stereotype. (Think Kevin Smith’s artless “Chasing Amy.”) She knew what sold. [You mean the fact that she only made a few thousand bucks from selling her books? Yeah... she knew what sold. Right. She spoke out and she was harshly ridiculed for it and still is. She was battered and she spoke out against battery. She was sexually assaulted, hundreds of women spoke to her about being raped at a time when women didn't feel safe to do so, and she spoke up about the rape atrocity against women. She had a sharp analysis of how white male supremacy works to oppress people. And your problem with that is what, exactly? That she doesn't respect some of the whiteboys you do?]

Third, Dworkin managed to create a web of deceit in Jerzy Kozinski/I, Rigoberto Menchu style which became an impenetrable of wall of credibility (and pity) no polite person dare question. [Sounds like you've read some of Ariel Levy and Susie Bright's work, yes?] Her vague claims of childhood abuse [as opposed to what? The kind that you believe?], her stint as a prostitute as a student at one of our finest liberal arts colleges [she went to Bennington for a time, left, went abroad to Europe, married a radical who turned out to be a sadistic batterer, left him, and was homeless and poor for a period of time, and earned cash by sleeping with young men; what about that is "controversial"] and her bizarre 2000 Parisian rape tale [which you're in no position to make a judgment about, or, um, were you there?] were more likely the result of heavy drinking and creative hysteria. http://www.susiebright.com/sexpert/dworkin.html

Fourth, Young hasn’t written anything that the liberal establishment hasn’t written 1000 times before. So what? Everyone had something nasty to say about Dworkin from Paul Fussell [the misogynistic military "hero" who fucked around a lot] to Adam Parfrey [strange guy who studies shit like vampires, cults, and has a huge image of Stalin on his wall]. Hating Dworkin was the official position. [Oooh. Some privileged white het men don't like her? Wow. That couldn't possibly tell me that they are antifeminists and misogynists, right?] Two points, however: What is rarely said is that Dworkin was in fact an excellent craftsman [um, she was a woman--unless you're going to make the case that because she lived with a gay man for thirty years, she must have been a gay man: same logic as thinking she's heterosexual for living with a man, eh?] in the use of the English language. Unlike MacKinnon who was a notably incompetent writer among the semi-literate creature known as “law professor,” Dworkin was a master of sentence structure and formal grammar. [Readers, you might want to read anything written by MacKinnon to understand that this comment only reveals Angela to be intellectually lazy. Or just virulently anti-radical feminist.]

The other point is what the entire debate actually rests upon. Dworkin’s influence among social workers, psychologists and the popular culture is matchless. [Really, you're too generous. You can always spot a Western antifeminist: they give feminists structurally incredible power and credit for accomplishing things that only white men have institutionalised power to do in the West.] It is not unfair to hold Dworkin accountable for everything from our poisoned relationships between the sexes [right, because men being sexist assholes and controlling abusive patriarchs hasn't ruined even one relationship], recovered memory syndrome, [which Dworkin wrote very little about, but as someone who knows and believes many people who have recovered memories of trauma: fuck you, Angela] the further shredding of our First Amendment thanks to the sexual harassment codes [um, that's due to a lot of activism and speaking out by many Black and working class women, actually. Have you heard of Michelle Vinson, Lois Jensen, and Anita Hill? And also due to some of MacKinnon's work, but not Dworkin's--you ought to be able to distinguish between the two white women: one you say you can read, but produce no evidence you've done so, and the other you claim can't write, and you cite no examples of her being unclear], and the concept of “date rape” further removing women from any responsibility for their own sexual choices. [Because women are responsible for which forms of date rape, Angela?]
Angela
Written 15 hours ago · Comment · Report Note
[Some comments following her Facebook editorial:]

Marja Erwin
I had interpreted her as the major target of cultural feminism and the major precursor of queer theory, so it's kinda surprising that she's so anti-sex-work.
Yesterday at 4:43pm · Report

Sean Haugh
I'm going to let Hugh Akston (the artist formerly known as Ragnar Danneskjold) speak for me on this one.
Yesterday at 5:55pm · Report

Dave Brady
She was for sure three bags full of it. I'm in favor of sex work and still taking appointments ;)

Chris Baker
When nutcases on the left and the right get together, it's never good.
8 hours ago · Report

Julian Real
More destructive that, oh, say, Hitler? You said, women. How about Thatcher? She actually ordered the murder of people. Dworkin ordered and had the State power to carry out how many murders? That would be "none". And this is the problem with you goddamned libertarians: you equate "ideas" being expressed with "harm being done". Assholes. Women I knew are either dead or raped because a battering or domineering boyfriend or husband took them out or used gross force to violate them. Dworkin did nothing of the kind. White Nazi women did atrocious things to Jewish women in concentration camps, and you have the fucking audacity to call a human rights activist who fought male supremacist power "one of the most destructive women of the 20th century". You are one privileged person, to even get to believe that's true, let alone type it out. And of course you get to. Free speech, right? Except for radical feminists, who aren't entitled to be respected for speaking out against racism, rape, sexual harassment, battery, and other sexual and sexist and racist atrocities. How DESTRUCTIVE, eh? Maybe potentially injurious to the entitlements of the oppressors to do as they please with impunity. But, well, Dworkin didn't even have that much power. She just wrote books and spoke out. And of course that's just about as criminal as it gets to libertarians, huh?